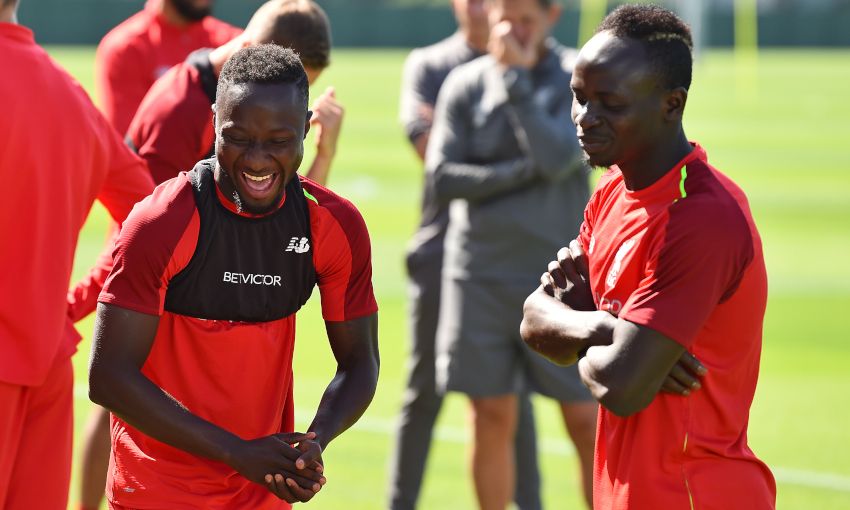 Sadio Mane has told Naby Keita his very best is still to come for Liverpool – even if the midfielder is currently keeping him awake at night during the club's Marbella training camp.

The pair are rooming together at the team hotel in Spain, but Mane has claimed Keita’s noisy snoring isn’t allowing him to sleep soundly.

Nevertheless, the No.10 has revealed to Liverpoolfc.com details of a conversation he held with his teammate during Wednesday morning’s training session, in which he backed him to build on his outstanding performance against AFC Bournemouth on Saturday.

“I just told him today in training, 'I know your qualities and for sure, everyone is waiting for more from you because that’s normal, it’s a big club and you are doing your best – but you can do more,'” Mane explained in Marbella.

“You saw it last game, he did very well and everyone was happy with him. For sure, a lot more is coming – and I am confident it will because I know him.

“I am [rooming] with Naby. It has gone good – [I have to say that] otherwise Naby will kill me!

“I know him very well, he is like a brother and he is a nice lad. But in the room, I cannot sleep because he is always snoring! He is a big snorer, all of the time!”

Liverpool arrived in Marbella on Monday evening and will remain here until Friday after taking advantage of a gap in the schedule to organise a training camp.

But it’s not just the work that’s being done on the pitches that’ll ultimately prove beneficial to the Reds, Mane believes – it’s also the bonds that are being strengthened off it.

He said: “You can see it. It is important for the team, not only on the pitch but also off the pitch is important because it can make a big difference, as it is doing now.

“It is the first club I have been at where off the pitch, all of the time the players are so close. I think that’s very, very, very good for us and for the club as well.

“We’ve started well, everything is going well. We’re training harder and it’s important we’re here to prepare for the next few weeks because they’re going to be so decisive. We know that, but we are focused, training very well and as hard as we can.”

Jürgen Klopp’s side jetted out to the Andalusian coast on the back of a 3-0 victory over Bournemouth, which marked a return to winning ways following consecutive 1-1 draws with Leicester City and West Ham United.

When they are back on Merseyside, the Reds will tackle the crucial final third of the campaign – and Mane is convinced they’re primed to do so.

“We are here, training harder and getting a little bit more rest so we’re back as fresh as we can,” he said. “We drew two games in the last few weeks, but our reaction was positive because we won 3-0 at home to Bournemouth.

“We know our target this year, so we’re going to fight for it.”