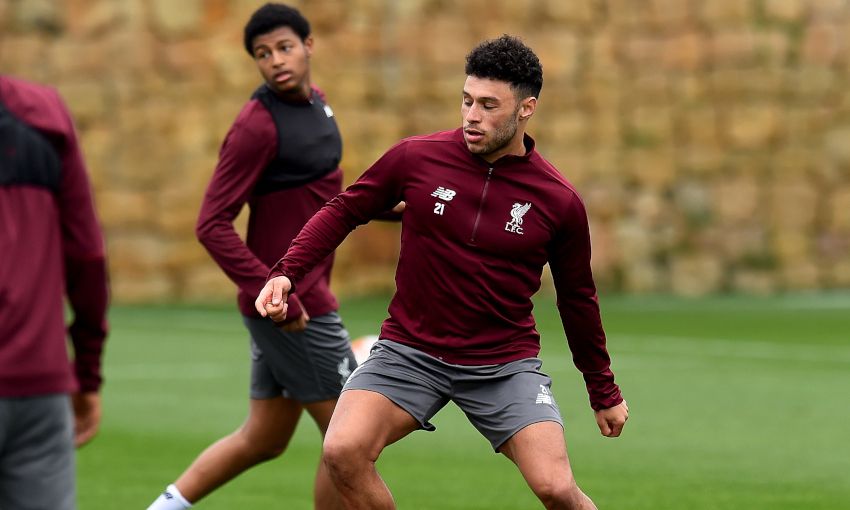 The presence of Alex Oxlade-Chamberlain and Rhian Brewster in Tuesday’s training session was a huge boost for the rest of the Liverpool squad, Trent Alexander-Arnold has revealed.

The duo participated in the Reds’ first workout of their four-day camp in Marbella as they continue to work their way back to full fitness following long-term injuries.

The sight of Oxlade-Chamberlain and Brewster training with their teammates was met with delight by supporters when the imagery was released – and Alexander-Arnold has explained why the feeling amongst the rest of the players was exactly the same.

He told Liverpoolfc.com: “It’s something that lifts the spirits massively. You see them every day in the treatment room, you see them around, and I think everyone just instinctively asks them how long they think it’s going to be now.

“It probably gets a bit tiring for them to be able to put an exact date on it because they are long-term injuries that you’re not sure when exactly you’re going to be back, but they’ve both shown they can push their bodies to the limit and get back as soon as possible.

“It’s been a really long journey for both of them; Ox’s has been more high-profile than Rhian’s, but Rhian has put in just as much hard work as Ox has. A lot of credit needs to go to him at such a young age. He hasn’t played with the first team much, but he has been put in an environment where he is in and around the first team but hasn’t had the chance to quite show himself.

“That’s probably really difficult for him, to see other young players on the bench and think: ‘That could have been me if it wasn’t for the injury.’ But he’s probably used it the other way and used it as motivation to say he wants to stay here. He’s shown great determination to show the manager that when he’s back, he wants to be in and around the first team. That’s what he aims to do and I am sure if it wasn’t for the injury that would have happened.

“The pair of them are a credit to themselves and epitomise the spirit around the team and around the club, that it is going to be very difficult to break that spirit and they’ll bounce back whenever there are setbacks.”

Alexander-Arnold himself recently endured a spell on the sidelines, albeit drastically shorter than that of Oxlade-Chamberlain and Brewster.

A knee injury sustained at Brighton and Hove Albion on January 12 ruled the defender out of the Reds’ subsequent fixtures with Crystal Palace, Leicester City and West Ham United before he returned as a second-half substitute against Bournemouth on Saturday.

“It was something I’ve never really experienced before in being injured,” the England international admitted. “It was something new and something to get my head around, so it was tough for me. But it’s thanks to the manager, the physios and the medical department in helping me get back so quickly – ahead of schedule.

“I feel good; it was good to get a bit of fitness in there at the weekend and that’ll help me get back to full fitness and to push on and hopefully start a few games in the next few weeks.”

Alexander-Arnold continued: “It was difficult because you feel like you’ve got no control at all, whereas when you’re on the pitch, you have a little bit the sense of being able to influence the game, impact the game in some way, by trying to get a goal or help the team get a goal.

“It was difficult for me knowing I wasn’t going to be able to influence the games at all, but I was there and trying to support the lads as well as I could. We didn’t get the results we wanted, but we remained undefeated and bounced back at the weekend with three points.”

Watch: The Reds train on day one in Marbella

Alexander-Arnold’s return to action coincided with Liverpool bouncing back to winning ways as Bournemouth were dispatched 3-0 following consecutive 1-1 draws with Leicester and West Ham.

The Reds were roared on by a vociferous home crowd on Saturday, determined to make their own impact on proceedings – something Alexander-Arnold felt they achieved.

He said: “I think I said to someone after the game, but I’d never seen anything like that for 3pm on a Saturday – and not many players would say they have, I think. The Bournemouth players might have been a bit shocked, I think, because not many players at all will have ever seen a three o’clock game with so much enthusiasm.

“The fans showed why they are one of – if not the – best set of fans in the world. It showed us the support we have from them and how the end of the season will look for us in terms of support from the fans. The fans will realise how much they mean to us and how much they influence our performance.

“As was evident in the Champions League last season when their support was fantastic and helped us along the way, helped us get the results and special nights we wanted. Hopefully we’ll be able to do that [in the back end of the season] even if they’re special daytime games. Hopefully we can count on them to be there and support us like they did on Saturday.”

Liverpool will return to England on Friday afternoon following their four-day stay in Marbella, ready to tackle the final third of the campaign – which includes the resumption of the Champions League.

There’s plenty at stake for the Reds as the season edges towards its conclusion, but Alexander-Arnold insists the players are determined to enjoy the ride.

“It’s sort of similar to the Champions League run last season where the fans, the players and everyone in and around the club were just enjoying it,” he stated. “We all felt confident. It’s just about getting that feeling back again this season.

“We’re all really excited for the last quarter of the season. It’s been a really good one for us so far, we’ve done well and got results. Hopefully we’ll be able to push on. We know we’ve got difficult games, but as the old cliché goes we’ll take it game by game.

“It’ll be good to get the Champions League nights back at Anfield again and hopefully we’ll be able to show we’re a quality side in Europe as well as at home.”