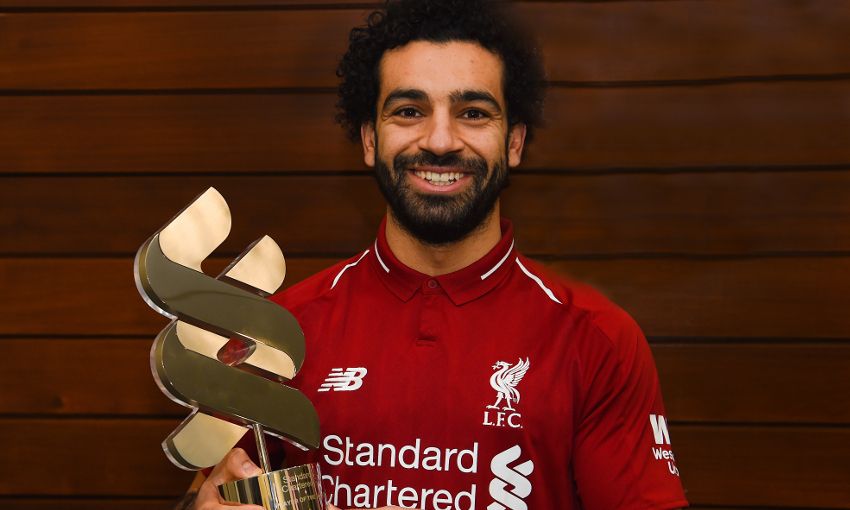 Mohamed Salah today collected his second Standard Chartered Player of the Month award of the season after being voted Liverpool’s star man for December.

The Egyptian was presented with the trophy at Melwood on Friday in recognition of his sparkling form throughout the final month of 2018, pipping Virgil van Dijk and Xherdan Shaqiri to the prize following a poll on Liverpoolfc.com.

Salah netted seven goals in eight appearances during December to help the Reds maintain their push for Premier League and European success.

He struck a hat-trick during a 4-0 victory at Bournemouth before bagging the crucial only goal of the game to move the Reds into the last 16 of the Champions League with a 1-0 win against Napoli at Anfield.

The No.11 also found the target against Wolverhampton Wanderers, Newcastle United and Arsenal as Liverpool ended the year with eight straight victories.

Upon being presented with the award, Salah told Liverpoolfc.com: "I think it was a good month for all of us and I’m very happy about it. Being able to help the team to win games is the most important thing for all of us.

"Now we need to carry on. We have to show a good reaction after the last league game against Man City. It will be very important for us as a team and as a club.

"We have to show how to react. I am very excited about tomorrow [at Brighton] and I think it’ll be a very good game."

Salah's seven strikes throughout December showcased his ability to score different kinds of goals. So which one was his favourite?

"I think I would go for the one against Napoli," he replied. "It was the most important game in that period and I am happy I was able to score, so I’d pick that one.

"I was very happy to get the hat-trick at Bournemouth, but I think I’d go for Napoli because it was such a big game for us to carry on in the Champions League. It was very important."

Earlier this week, Salah was recognised for his outstanding form throughout 2018 by winning the CAF African Player of the Year award for the second year running.

He said: "I am always very happy to win that award – it’s always been special to me to win it. I have to also say that Sadio also deserves it because he had an unbelievable year, but I’m happy about the award."