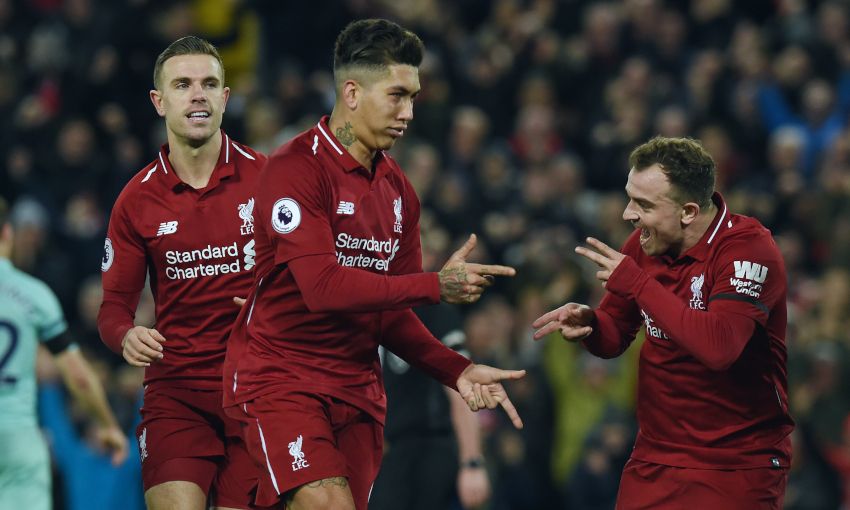 Roberto Firmino's hat-trick against Arsenal was a deserved reward for the Liverpool No.9's performance, according to Xherdan Shaqiri.

The Brazil international ended his eight-month wait for a Premier League goal at Anfield in the most emphatic fashion on Saturday evening.

Firmino scored twice in 90 seconds after Ainsley Maitland-Niles put the Gunners ahead and later – following strikes by Sadio Mane and Mohamed Salah – added his third and the Reds’ fifth in the second half.

“It was fully deserved. He had a very good game,” Shaqiri told Liverpoolfc.com post-match.

“It’s always good to have people who can score in the team, he scored the second one very nicely. He fully deserved to score a hat-trick and I’m happy for him. I hope he can keep going like this.

“It was a top game; obviously Arsenal have their quality and you can see that with the first goal they scored.

“It was a little wake-up call for us, we were straight on after we conceded and scored for 1-1 – that was the big point for us to change the game and to win in the end.”

The victory lifted Liverpool nine points clear at the top of the Premier League as Jürgen Klopp’s side increased their unbeaten start to 20 matches.

Next up is a massive meeting with Manchester City on Thursday night – and Shaqiri insisted the Reds have to block out any external noise to retain their momentum.

“But we want to stay focused, we have to stay focused and work hard every day. There’s a long way to go. At the moment we’re really happy and I hope we can keep going like this.

“We are very happy to win this game. That high a result I didn’t expect – it was important to win. Obviously we had a really good game and we are very happy at the moment.”

On his own form, Shaqiri added: “You can see on the pitch I have a lot of confidence at the moment.

“I wanted to play from the beginning so I was very happy to play and have an impact on the game, helping my teammates to win the game. I’m very happy at the moment.”