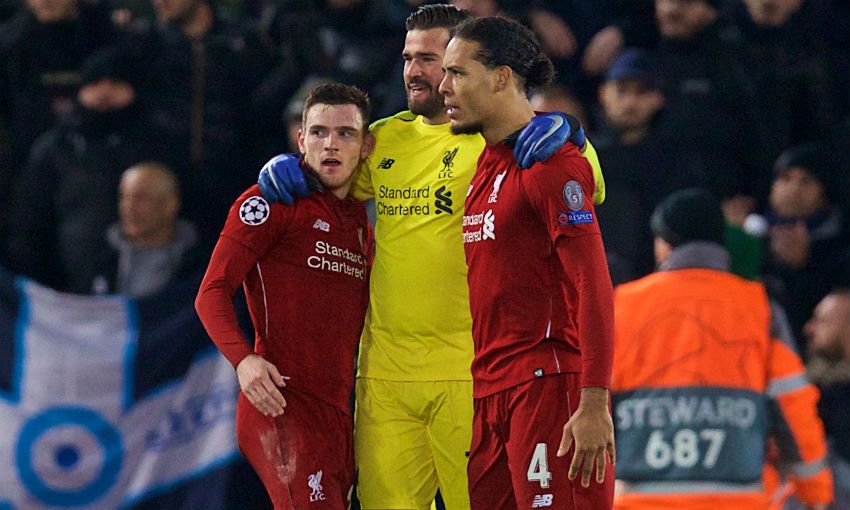 Virgil van Dijk saluted the ‘fantastic’ Alisson Becker after the Brazilian made a jaw-dropping, stoppage-time save to ensure Liverpool qualified for the last 16 of the Champions League.

The Reds goalkeeper somehow denied Arkadiusz Milik from point-blank range in the 92nd minute of Tuesday’s Group C finale against Napoli at Anfield.

Alisson’s intervention preserved the home side’s 1-0 lead - which was earned by Mohamed Salah’s brilliant first-half goal - and saw them reach the knockout stages of Europe’s elite club competition at their visitors’ expense.

Liverpool’s No.13 has now kept 12 clean sheets in his 22 appearances for the club following his summer transfer from AS Roma, and Van Dijk hailed his teammate following yet another decisive contribution versus Carlo Ancelotti’s men.

“He’s been fantastic for Liverpool and for us,” the centre-back told Liverpoolfc.com.

“[He’s a] great character, a great guy and he helps us all. He gives confidence to everyone. That’s how it is and how it should be as well, for the whole team.”

The Reds created a host of opportunities to add to Salah’s superb opener, but their failure to beat David Ospina again meant Napoli were always within striking distance of the draw they needed to go through instead of their opponents.

Van Dijk, though, was pleased with the way in which Liverpool defended their slender advantage.

“We should’ve made it a bit easier I think, but the job is done and we’re through to the knockout stages,” he said.

“We could’ve made it a bit easier if we’d scored two more, but in the end, especially for us at the back and in the midfield [it’s about] keeping it tight, win your headers, and we did it.

“In the end, [we’re] very pleased. That Ali needs to make the fantastic save is something that wasn’t really necessary if we’d scored all the goals - including myself. But like I said, we’re through.”

Jürgen Klopp’s players can now look forward to Monday’s draw for the last 16 - and Van Dijk feels no side will want to be paired with the Reds.

The Dutchman continued: “I don’t think so. That’s what we showed last season and this season as well. We’ll see what’s going to happen.”