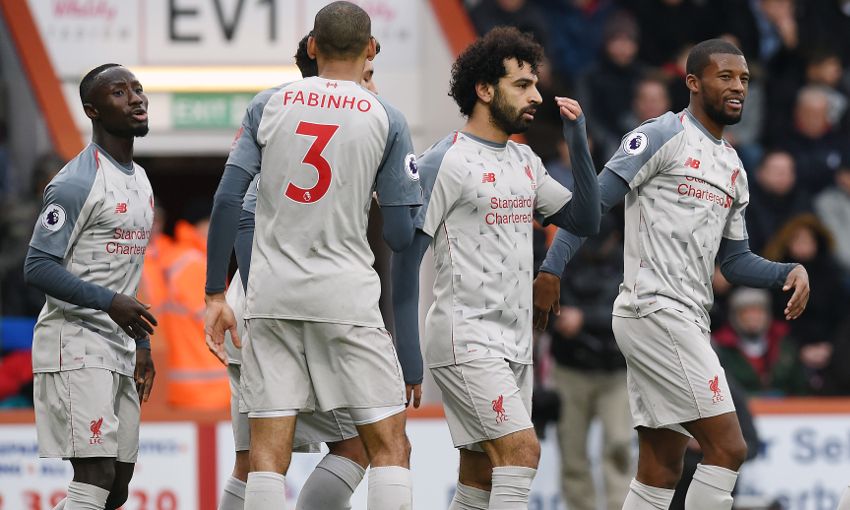 Liverpool's 4-0 victory at Bournemouth fell short of the 'perfect' away performance, according to Georginio Wijnaldum.

Jürgen Klopp’s side were in control for much of Saturday’s Premier League clash at Vitality Stadium and surged clear of the Cherries with three second-half goals.

Mohamed Salah bagged a hat-trick – with the other a Steve Cook own goal – to secure a result that lifted the Reds a point ahead of Manchester City at the top of the table.

But Wijnaldum insisted Liverpool, who are now the only unbeaten team in the division, could have been even sharper during the opening 45 minutes.

“It would have been complete if we’d done the first half much better,” the midfielder told Liverpoolfc.com after the final whistle.

“It was a good game but if you want the perfect game, we had to play a better first half.”

Nevertheless, the strength in depth at Klopp’s disposal was evident again on the south coast.

Having made seven changes to his XI for the midweek win at Burnley, the manager opted for five alterations against Bournemouth and was rewarded with a third Premier League victory in six days.

“It’s important to have a squad that can replace each other,” said Wijnaldum.

“Everyone knows in the Premier League – and especially when you play in the Champions League – you play a lot of games, so you need a big squad. If everyone can replace everyone and keep the level, it’s really important.

“I hope we can stay fresh until the end of the season and injury-free. Then I think we can do big things. We’re in a run right now and we have to make sure we stay in this run to succeed.”

Wijnaldum explained why it was only ever a matter of time before the midfielders adapted sufficiently to express their obvious talents.

“Everyone needs time to settle in. I needed time, we saw it with Ox, Robbo needed time. Everyone did well after a few months,” added the Dutchman.

“Naby and Fabinho are doing well – and Shaqiri also. We hope they will do [even] better because that means they will help the team and make us even stronger. They are in a good way.”