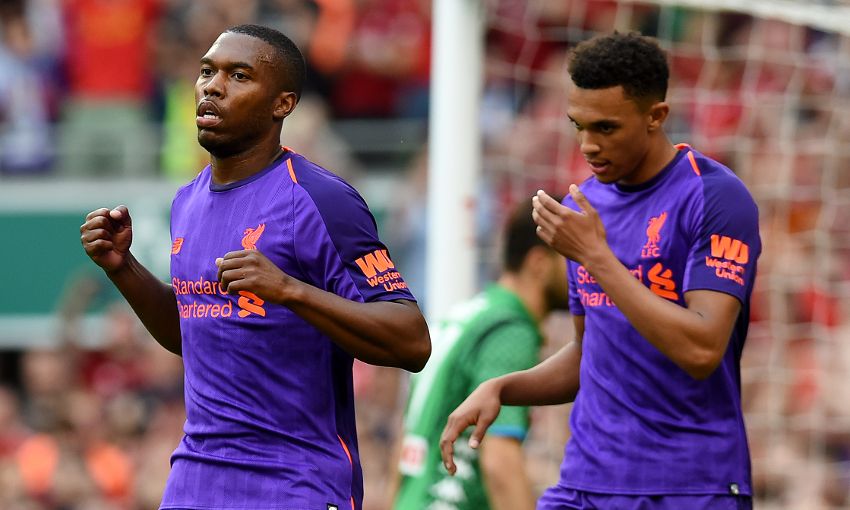 Daniel Sturridge revealed his bittersweet emotion after punctuating another impressive pre-season performance with a goal against Napoli.

The Liverpool No.15 had two promising chances to net soon after entering the action as a substitute in the second half at the Aviva Stadium in Dublin, but eventually struck when a Divock Origi effort was parried into his path on 73 minutes.

Sturridge then turned provider for Alberto Moreno to thrash in a fifth unanswered goal for the Reds on another fine evening’s work for Jürgen Klopp’s side.

But with a typical striker’s mindset, the Englishman was not satisfied with his tally.

“I’m happy but I don’t like to miss chances either so I’m thinking about those ones more than the one I scored,” he told Liverpoolfc.com after the game.

Sturridge was, however, thrilled by the energetic manner in which Liverpool found gaps in the Napoli backline throughout the entire match.

“It was brilliant. Everyone was pressing and creating for each other, counter-pressing, doing everything the manager asked of us – we can’t do any more than that,” he continued.

“As long as we go out there and put our best foot forward, that’s all we can ask for. It showed from the first few minutes of the game.

“It’s only a week now until the season starts. We’ve got another big game on Tuesday, another important game for minutes in our legs. Then it’s the final preparation for the first game.”

Get tickets for Liverpool's clash with Torino at Anfield on Tuesday>>