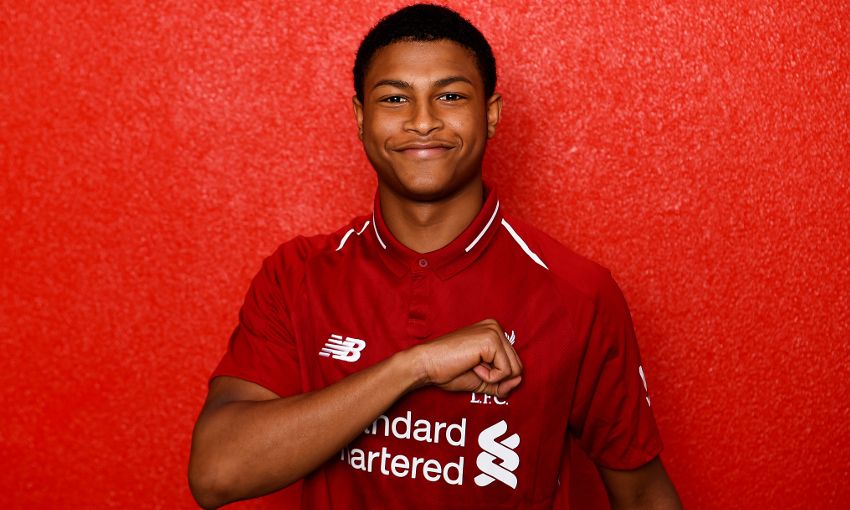 Rhian Brewster laid out his first-team ambitions as he followed up signing a long-term contract with Liverpool by declaring the club his 'home'.

The 18-year-old striker committed himself to the Reds by penning a professional deal at Melwood, where he will now work on a permanent basis as he takes the next step in his career.

Once the formalities were complete, Brewster gave an engaging, insightful interview to Liverpoolfc.com in which he explained why this is the place for him to thrive.

The U17 World Cup winner also provided an update on his recovery from an ankle ligament injury suffered in January and revealed the role played by Alex Oxlade-Chamberlain in his rehabilitation.

Congratulations, you’re a full-time professional and your future is here at Liverpool. How does it feel?

It feels great. I’ve wanted to do this for a very long time now and I think it’s the right moment for me and my family. I’m looking forward to getting back fit and making some appearances.

It was well documented that there was a lot of interest in you. So why is Liverpool the long-term project and ambition for you?

I just wanted the opportunity to make it at Liverpool. Of course you have to look elsewhere sometimes and maybe somewhere else is a better place for you. I think Liverpool is the place for me. I can’t wait to get started and get back fit.

Since I got here the club has been amazing to me and treated me like family. It seems like I’ve been here my whole life, to be honest. It’s coming up to my fifth season now. I [still] remember my first training session. It’s amazing and I can’t wait to get started. 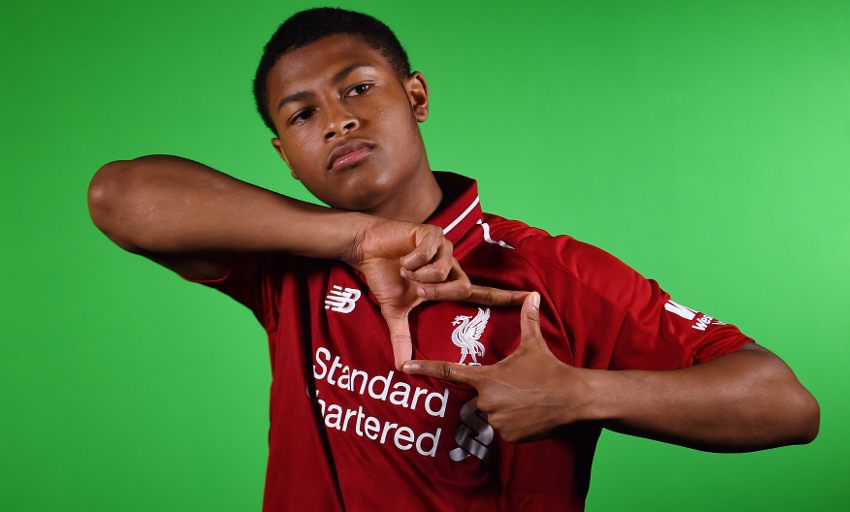 You have been here over the summer working on your rehab. Has that helped cement the ambition that you want to be at Liverpool?

I’m injured at the moment but I’ve been coming in every day during the week, trying to get back fit so I can be back training with the lads and everything. Ultimately, this is a great team that I want to be a part of. Not just being a number but a face of the team is hopefully what I can do. Getting back fit and fighting fit is what I want to do in the upcoming season, and prove to everyone I am good enough.

How much of a low was the injury you suffered in January?

I was on such a high at that time in my career. You’re going to get knocked down sometimes; unfortunately, I did with my ankle being injured. I can’t wait to be back because I’m missing it like crazy. When I’m back I want to prove to everyone that I made the right decision in staying at this club.

Have you thought that had you stayed fit, there might have been a debut last season?

I’d like to think that would have happened but obviously we’ll never know because of what happened. But hopefully this year I will get my professional debut and push on from there.

Does the time you spend here working with the physios make you mentally stronger?

It does. You get annoyed and angry because you’re not playing. When you’re seeing everybody else on holiday, and you’re here working and fighting to get fight, it does get boring and annoying. Me and Ox have been strong together and pushed each other on. Ox has helped me a lot, him being senior, to make me push and push. I can’t thank him enough. I’m looking forward to both of us getting back fit and hopefully playing.

It sounds like a bond that’s going to last a long time?

Of course, I’ve made a brother there.

Have you been helping him as well? The timing of his injury was awful, just before a Champions League final and the World Cup…

I know he would have been in the World Cup squad and probably would have been playing. It has been hard for him. But together we have been helping each other through the process. If I’m having a good day and he’s having a bad day, I’ll try to help him and vice versa. We’re going to be there at the top together soon.

And this is your home now. You’ve graduated from the Academy, Melwood looked after your rehab, and this will be your home as a full-time professional now…

Saying that is a bit crazy but I’m so happy. Being around here all the time with the boys, I think I’ve found my home. 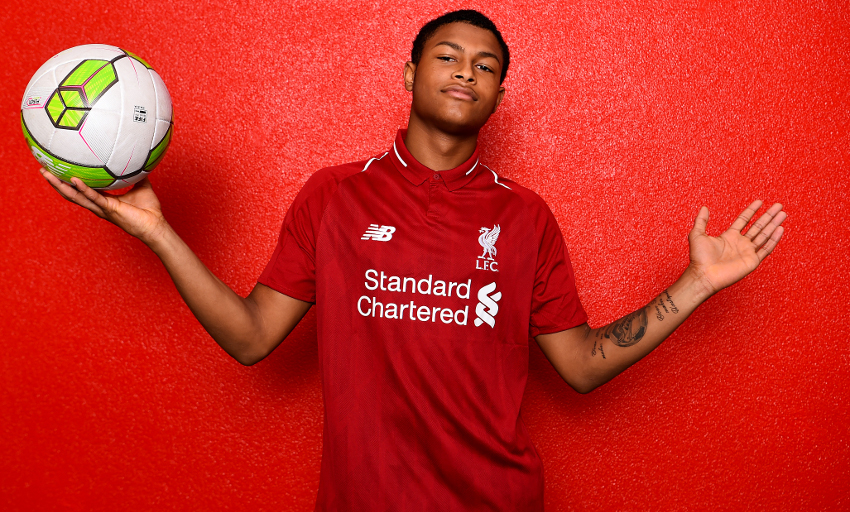 How key has Jürgen Klopp been in your decision to stay?

He has been key. Obviously I’ve had conversations with him and I’m just hoping he puts his faith in me and gives me an opportunity to play. I think he will, that’s why I wanted to stay here. Hopefully we can push on, not just as a team but as a club.

There are so many examples of him giving young players a chance. There is none greater than Trent Alexander-Arnold…

That’s another reason as well. It’s not like he’s saying I’m the first one, it is proven he has done it before with the likes of Trent, Ben [Woodburn] and other young players in the team. It shows he does give players a chance and I’m just waiting for mine.

You were a guest at the Football Writers’ Association’s awards, on the table alongside Mo Salah. How did that come about?

I was at Melwood, going in for treatment, when Jürgen pulled me and said we had our awards but he’d like me to go to those awards as well, that it would be really good for me. They invited me and wanted me personally alongside Mo. It was a bit of a shock. When I got there I was a bit nervous but it was a really great night and the words Jürgen had for me were great – I thank him so much, it helped me a lot. I know the club is behind me. I knew from that this is my home.

It sounds like you’re greatly inspired by the first-team professionals?

Of course. When I was at the Academy, you watch them on TV all the time. When you watch them on TV, you know you’re going in with them the next day. Being young, just 17, when I first came up, it was surreal to see them every day. I want to be that face one day as well, hopefully I can be.

Of course, that’s my aim: to either be alongside Bobby or in front of him. Of course it’s going to be hard because he’s a great player and a great person. But I hope in the next two or three years I can be the No.9 for Liverpool. Who knows what’s going to happen? I set myself high standards because ultimately I want to the best and being the best means setting myself high standards – and that’s what I’m going to do. 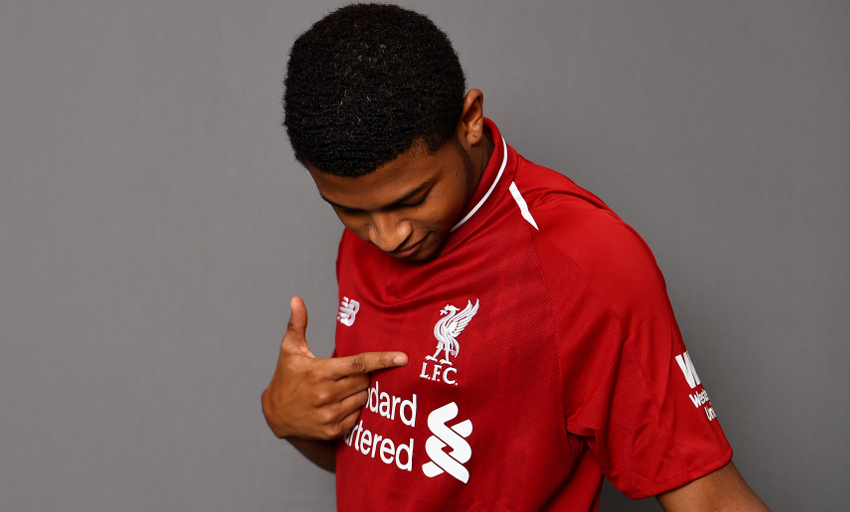 When are you back then?

I’ve been out for about six months now and it’s quite far down the line. I’m hoping to be back by around Christmas. Hopefully by then I should be back fit and fighting for my place in the team.

Your dad is a massive Liverpool fan. Tell us about his reaction when you told him this was done and dusted…

I can’t use a few of the words he said! He was over the moon. To be honest, all my family and everyone around me is over the moon that I’m signing my first professional contract and for Liverpool, such a big, big club. They’re just so happy and excited. Everyone just wants me to get back fit now and prove to everyone what I can do.

You’ve experienced scoring at Anfield for the U23s and the youth teams. Have you had dreams about what it would feel like to do it for the first team?

Sum it up then, how does it feel to be a Liverpool professional?

I’m amazed to be at such a big and great club, with many expectations. I hope for the fans and the club this season coming and in my future at the club we set very high standards for ourselves. We want to win the Premier League of course. If that happens while I’m here, it’s going to be great and I’ll have made the right decision. Playing week in, week out and being with the squad, I’ll know I’ve made the right decision by signing. I hope for the fans and everyone around me that we can push for big things: the Premier League, the Champions League, the FA Cup. The fans want to see us win trophies so we’re going to do that for the fans.