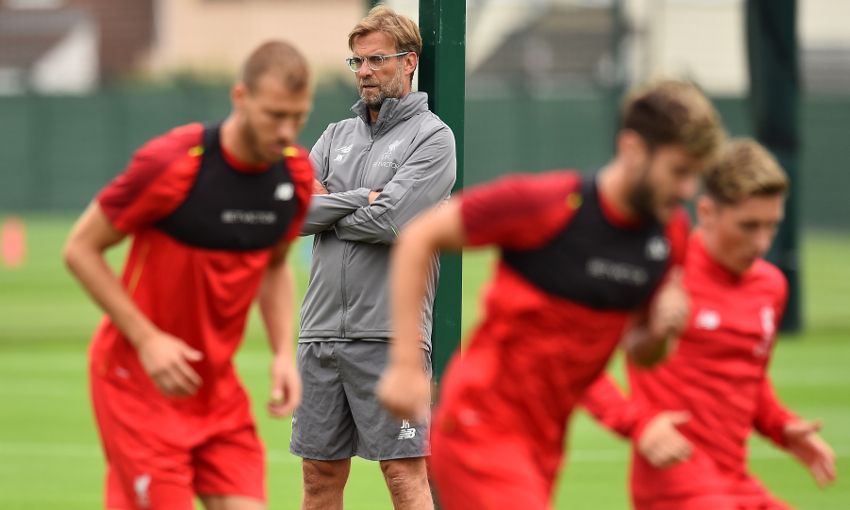 Georginio Wijnaldum, who returned to training on Sunday, must be assessed before the game after missing Thursday morning’s session.

“It’s pre-season so I don’t know exactly who will be ready for Saturday, to be honest,” the manager told Liverpoolfc.com once the workout, the first of two on the day, was complete.

“I hope Joel [can play], it looks like that. Virgil can play. Gini was not in training this morning; that’s pre-season, sometimes they feel a little bit here or a little bit there and the medical department tell me: ‘not today’. I don’t know if he will be in tomorrow, we will know that a little bit later.”

The trip to Bury marks the Reds’ third outing of the summer after 7-0 and 3-2 victories at Chester FC and Tranmere Rovers respectively since they came back to Melwood on July 2.

Klopp confirmed he is likely to name different teams for each half of the clash with the League Two side, as he did in the previous two matches.

The boss anticipates a good test for Liverpool as they continue to lay the groundwork needed to improve on the level they showed last term.

“It’s still early stages. A lot of teams started only yesterday and we are already eight or nine days in,” he continued.

“We want to use that time, we don’t want to make early tests in the games and say: ‘that’s not enough’. We only want to play as often as possible and work with the results and the performances. As long as it’s fair and they cause us problems, it’s good for us.

“I don’t think Tranmere caused us too many problems, we caused our problems ourselves but that’s part of football as well. It was a nice atmosphere, the pitch was really good. I liked the game.

“Now let’s do the next step. It’s much more important in the pre-season what we do in the sessions. In the games sometimes you see a little bit of it, sometimes not. You need to play football with instinct and we create this kind of instinct again.

“A lot of players will come back now in the next eight or nine days and then we have the next group and we are in America, they’ll then start training and all that stuff. It’s kind of a challenge but it’s the same for all the other teams as well.

“The plan is to be stronger after pre-season than before pre-season, reach the level from last year again and use that as a basis for the next step.”