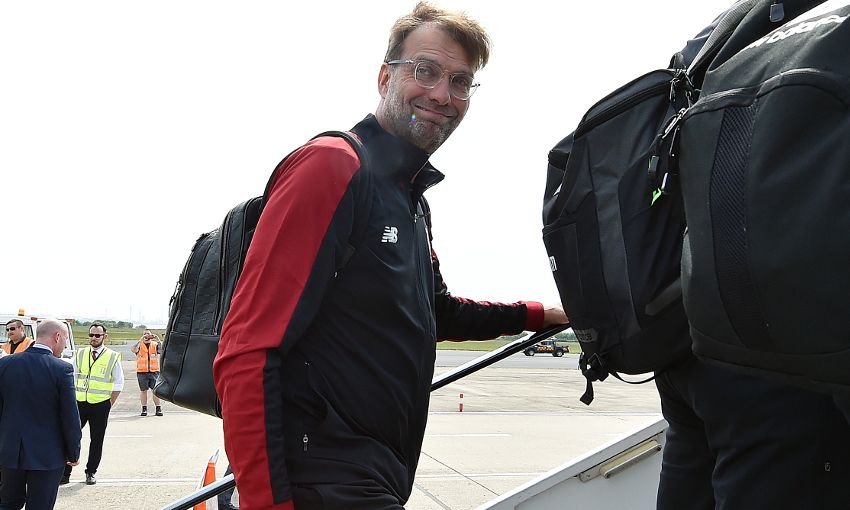 Jürgen Klopp has explained why he's pleased with how Liverpool's preparations for the Champions League final have unfolded over the last 10 days as they touched down in Kiev ahead of the meeting with Real Madrid.

By the time kick-off in Ukraine comes on Saturday night, the Reds will have had just short of two weeks to prepare for the contest with the current trophy holders at the NSC Olimpiyskiy Stadium.

During that time, the squad went to Marbella for a four-day training camp, which concluded last Saturday before they returned to Melwood to continue gearing up for the final.

“It’s been very good – very, very, very good as you can imagine,” Klopp told Liverpoolfc.com on board the team flight to Kiev. “The mood is positive, the attitude is brilliant, the training… it would be crazy if it was not fantastic.

“[We are] very excited in the most positive way; we’re really looking forward to it. We’ve had a few meetings, good sessions, all what we wanted to do. Now, two days left and all good.

“If we’d lost against Brighton, we’d have been fifth and that would have made the first three or four days [of training] really different. But we didn’t, thankfully, so from the first day the lads have been in a really good mood – but the Champions League final was far away at first, two weeks. I didn’t mention it every day and say, ‘Don’t forget! Saturday May 26 – the final!’

“The weather has been really good in Liverpool as well, so it’s been a very special week so far.”

Liverpool trained at Melwood on Thursday morning before departing for Kiev from John Lennon Airport just after 2.30pm BST.

The Reds will hold a session at the Olimpiyskiy on Friday night before another workout on Saturday morning ahead of kick-off.

Klopp continued: “We will do normal things. We trained today already because we thought it made more sense to train at home and then fly.

“The next session will be tomorrow evening. We will have a meeting in the morning, press in the afternoon and then training – so completely normal things. Saturday morning, a little session – the boys like that – and then let’s play the game.

“We don’t have to talk constantly about it, but we cannot ignore that it’s coming. Everything will be special from now on, that’s obvious and we don’t have to say too much about it. The difference is obvious.

“We can sleep twice and then do everything to try and fulfil the dream.”

For Liverpool’s current squad, the experience of a Champions League final will be a new one for them – but for Klopp, it’ll be his second involvement in Europe’s showpiece event having led Borussia Dortmund to the last hurdle in 2013, where they were narrowly defeated by Bayern Munich at Wembley.

“It feels good, really good. In this moment, I am very excited and 0.0 [per cent] nervous,” the boss continued. “I don’t know if I was nervous years ago when we were in a similar situation [with Dortmund], I can’t remember things like that – but in this moment I am not.

“I am ready, it’s a big thing. It is really special, I know that, but in the moment I am only really happy to be here and I really looking forward to it.

“So far, it was an outstanding journey and I would love for all the people – for all of the players and all of our fans – if we could bring it to a fantastic end.”