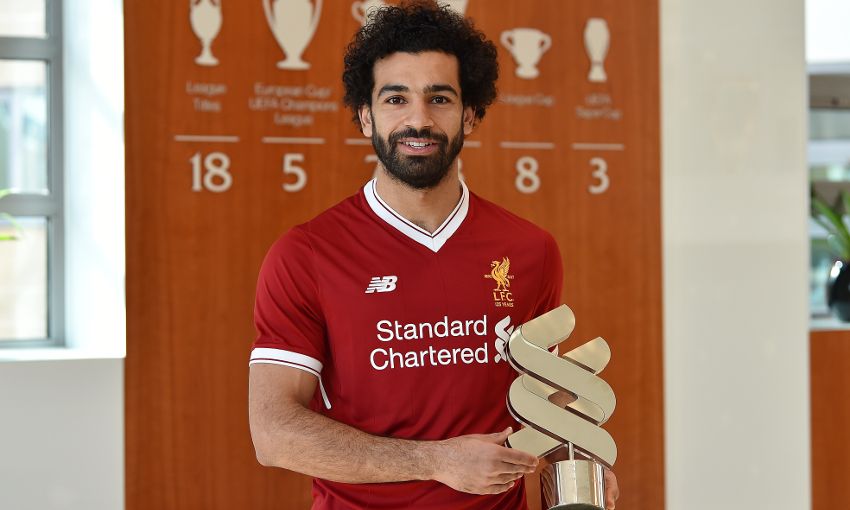 Mohamed Salah collected his fifth Standard Chartered Player of the Month award of the season at Melwood today after being voted Liverpool's star man in February.

The Egyptian continued his sensational form by scoring in every Reds match, beginning with a double against Tottenham Hotspur at Anfield – with his second a sublime piece of individual skill.

He went on to net at Southampton, where he also assisted Roberto Firmino, and in the Champions League rout at Porto before creating one and scoring another as West Ham United were beaten 4-1 at Anfield.

Salah was a landslide winner in the poll of fans on this website, ahead of second-placed Firmino and left-back Andy Robertson in third.

“I am very happy to win it again," the No.11 told Liverpoolfc.com upon collecting the accolade. "I’m happy with the results we had in February, they were good results for us, but we’re already looking forward to our next game.

“I’m pleased with my form, but everyone did good throughout the month. We won three games – and the most important thing, as I’ve said, is always the results for the team.”

In total, Salah scored five goals during the month, including solo stunners against Spurs and FC Porto.

So, which was his favourite and is it the best goal he's ever scored?

“All of the goals were goal important for me, but if I had to choose one in February it would be the second goal against Tottenham," he said.

“I think this season, I could choose this goal as my best and the first goal against Southampton also. Everton was also good, too. It’s hard to say if it’s the best one.”

Having been named on the bench for the midweek draw with Porto, Salah will be aiming to return to Liverpool's starting line-up when the Reds travel to Old Trafford to take on Manchester United on Saturday lunchtime.

“We’re playing so good at the moment and our position in the Premier League is improving and much better," said the 32-goal forward. "We’re now in third and we play the next game against Manchester United, second against third, so it’s an important game. We have confidence, we’re playing good and we need to keep that going.”