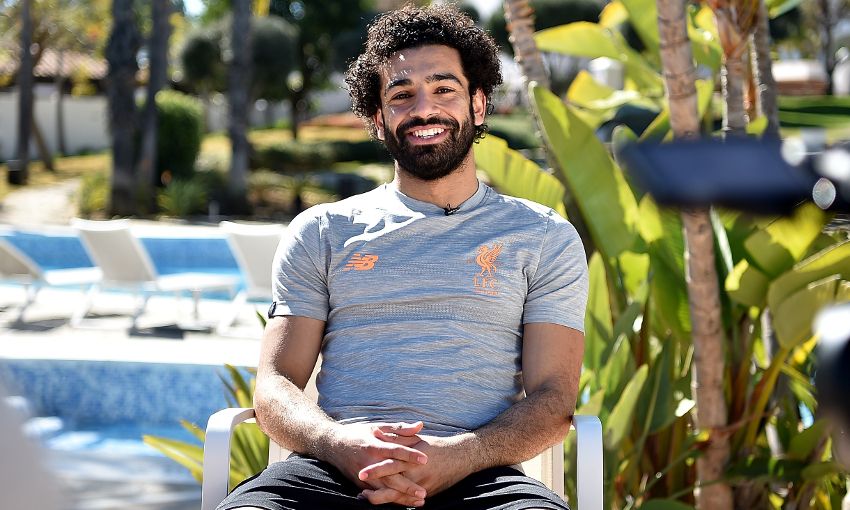 Mohamed Salah has described his 'great feeling' at hitting the 30-goal mark for Liverpool with his strike in Wednesday's victory over FC Porto – but he isn't satisfied yet.

The forward reached the milestone with a wonderfully taken effort at the Estadio do Dragao in which he juggled the ball over goalkeeper Jose Sa with both his feet and his head before finishing from close range after James Milner’s initial shot had come back off the post.

It’s taken Salah just 36 appearances to reach 30 strikes; however, despite such impressive statistics, the No.11 still believes there is room for improvement.

Speaking to Liverpoolfc.com at the Reds’ training camp in Marbella, he said: “It is a great feeling to have scored 30 goals in a first season at a club like Liverpool.

“It’s something huge, so I am very happy about it – but I have to carry on and keep looking forward to score many more goals.

“In my mind I am always trying to improve and I’m doing it every single day. Every day I look at myself and try to improve myself all the time.

“I am happy at the moment, I feel good, and that’s the most important thing – and 100 per cent, there is still more to come.”

Salah is keen to point out that reaching 30 goals would not have been possible without the contributions of those around him at Liverpool, both on and off the field.

“I’ve said before, the players and the coaches here make it easier for you,” he added. “I play alongside very good players, each one has different qualities, and that makes it easier for me.

Meanwhile, Salah has thanked supporters for the giant banner that was on display in Porto in homage to him.

The 25-year-old was sent an image of the flag – which read ‘The Egyptian King’ – on Tuesday evening when he returned to the team hotel in Portugal following training.

“I want to thank the fans for it. It’s something different, it’s something good. I feel good about it, I feel the fans love me, so I am happy about it.”