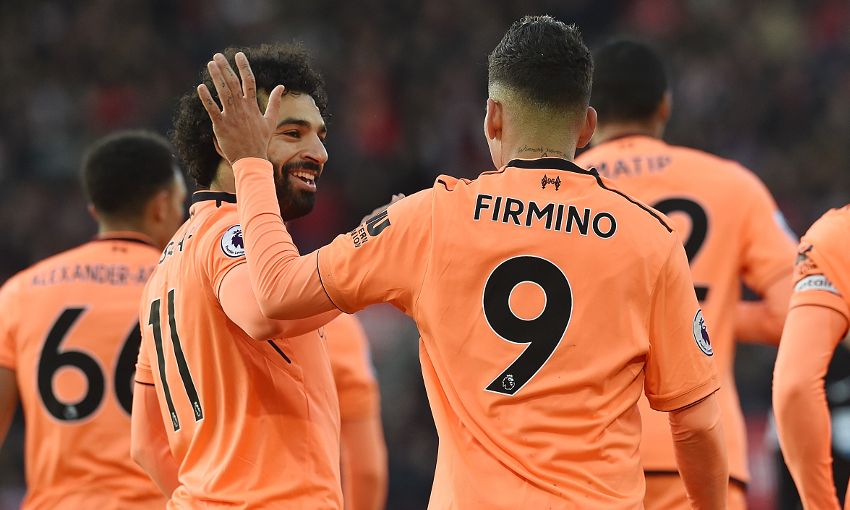 Liverpool moved back up to third in the Premier League table with a 2-0 victory over Southampton at St Mary's on Sunday.

Roberto Firmino fired the Reds into the lead in the opening exchanges as the visitors launched a speedy counter from a home corner.

After the Saints threatened an equaliser, Mohamed Salah extended Liverpool’s advantage just before half-time when he gleefully swept home from a sublime Firmino lay-off.

Salah and Sadio Mane had further chances to enhance the Reds’ lead after the break, but the two first-half goals were enough to move them to within two points of second-placed Manchester United in the table.

Joel Matip, Georginio Wijnaldum and Alex Oxlade-Chamberlain were restored to the line-up as Jürgen Klopp elected to make three changes. They replaced Dejan Lovren and James Milner as well as the rested Jordan Henderson, while Virgil van Dijk lined up against his former club for the first time.

Liverpool began assertively on the south coast as they looked to maintain their grip on a top-four berth.

And they duly took the lead after just six minutes of play. Van Dijk stayed cool to nod the ball back to Karius following a corner, who quickly released it to Oxlade-Chamberlain. He in turn played a searching ball forward into the path of Salah’s run, which Wesley Hoedt failed to cut out.

The No.11 then squared into Firmino, who slotted beyond Alex McCarthy with aplomb.

Karius’ contribution to the goal was vital – as was his save from Pierre-Emile Hojbjerg 10 minutes later, sprawling himself to block the midfielder’s close-range effort after he’d beaten Andy Robertson to a cross.

The Saints were growing in confidence after suffering an early setback and were seeing plenty of the ball. Guido Carrillo’s downward header needed to be kept out by Karius just before the half-hour mark.

Then, the Reds goalkeeper produced a fine save to tip James Ward-Prowse’s powerful nod from a Dusan Tadic centre over the crossbar just seconds later.

At the other end, Wijnaldum’s attempt to slide Mane through on goal resulted in the forward toe-poking wide of the post under pressure before Robertson’s pass across the six-yard box couldn’t pick out a teammate after Liverpool opened up their opponents down the left.

Southampton will have been buoyed by their response to conceding an early goal, but they were prised open by a moment of magic just before half-time that extended the Reds’ lead.

Salah touched the ball off to Firmino just outside the area, who in turn returned it back in the direction of his fellow frontman’s run into the box via a first-time flick between his legs.

Liverpool’s top scorer required no second invitation as he steered a one-touch finish beyond McCarthy to put the visitors two goals ahead.

With the next goal in the contest seemingly crucial, Klopp’s side could have made the ideal start to the second period when Mane’s attempted acrobatic volley took a deflection and broke for Salah, but the Egyptian scooped over the crossbar on the turn.

Wijnaldum and Emre Can both struck over the frame of the goal from distance, while Milner was introduced in place of Oxlade-Chamberlain.

On 70 minutes Salah spurned a good chance to strengthen Liverpool’s grip on the contest, as he instinctively struck into the side-netting after McCarthy had blocked Firmino’s initial drive.

Mane then arrowed off target on the spin after being played into space by Wijnaldum’s dummy inside the box.

With the contest edging ever closer towards completion, Adam Lallana replaced Firmino for a first appearance since January 22 after injury.

And the playmaker was inches away from netting at his former home when he swiped wide from Salah’s neat lay-off inside the box.

There were to be no further indentations on the scoresheet as Liverpool saw out the final stages to consolidate their position in the top four.