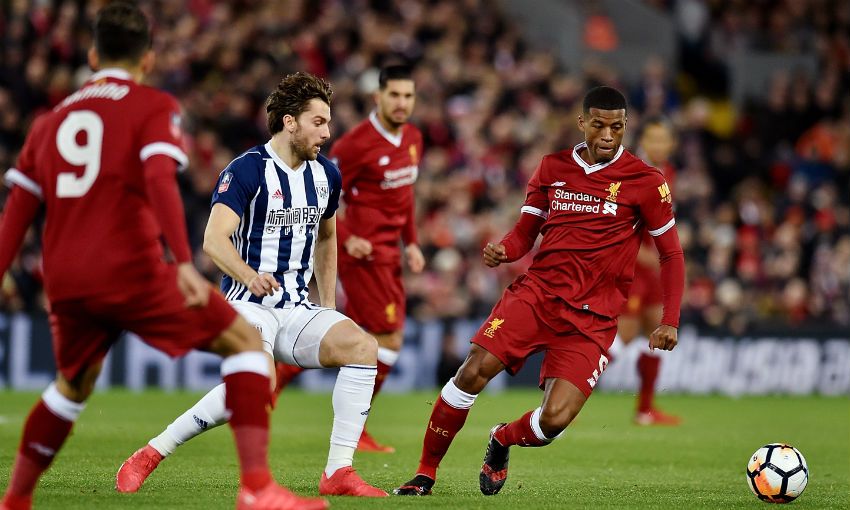 Liverpool were consigned to an FA Cup fourth-round exit as they were beaten 3-2 by West Bromwich Albion at Anfield on Saturday evening.

The Reds took an early lead through Roberto Firmino's deft chip but saw the game quickly turned on its head as Jay Rodriguez netted twice in quick succession.

The visitors then extended their advantage before the end of the first half, Joel Matip putting through his own net after Firmino had missed a penalty given by VAR.

And, though Mohamed Salah pulled one back late in the second period, West Brom held out to secure their place in the next round at the expense of Jürgen Klopp's team.

As Klopp explained pre-match, the absence of a two-legged League Cup semi-final this month offered him a chance to name his strongest possible team for this tie.

As a result, he made to just three changes to his starting XI, with the fit-again Alberto Moreno joining Trent Alexander-Arnold and Simon Mignolet in returning to the side.

The Reds instantly showed great fluency than in Monday's defeat to Swansea City and took just six minutes to carve out a lead.

A mix-up at the back for West Brom saw Salah left to run onto Chris Brunt's backpass by Jonny Evans and, though the Egyptian couldn't finish, Firmino chipped in the follow-up beautifully.

The lead lasted just 68 seconds, however.

Brunt capitalised on hesitance in the Reds midfield to play in Rodriguez, whose smashed finish into the top corner of the Kop-end net gave Mignolet no chance.

And the visitors were ahead just two minutes later as Grzegorz Krychowiak burst forward from midfield before playing the ball out to left-back Kieran Gibbs, whose low cross provided a tap-in for Rodriguez.

It could have been worse for the hosts had Craig Dawson's header not been ruled out through VAR shortly after, with Gareth Barry adjudged to have blocked the goalkeeper's view in an offside position.

The newly installed technology handed the Reds another lifeline after the restart, Livermore's foul on Salah in the box being spotted on second look after the No.11 appealed vociferously.

But Firmino failed to take the opportunity, sidefooting his spot-kick onto the bar.

West Brom's had little time to enjoy their reprieve, with Gibbs and Hal Robson-Kanu forced off by injury before the break, Ahmed Hegazi and Matt Phillips their replacements.

However, the Baggies had another goal to celebrate in injury time, Dawson latching onto a recycled ball and forcing Matip to turn into his own net from a low cross.

Just four minutes after the restart, the travelling fans thought they had a fourth goal, but Dawson was adjudged - this time by the linesman - to have been offside in nodding the ball home.

That mattered little in terms of the pattern of play, with West Brom still enjoying great succcess in picking off Liverpool attacks and showing threat on the counter.

And so with 25 minutes of normal time remaining, Klopp opted for a triple change, bringing on Danny Ings, Jordan Henderson and James Milner in place of Sadio Mane, Alex Oxlade-Chamberlain and Emre Can.

Milner came close with a stinging half-volley from, before Ings was also denied by Ben Foster as the visitors held firm in the face of building pressure.

But there was little they could do about Salah's finish inside the box after the ball had bounced somewhat fortuitously off Firmino.

The Reds had all of the ball in the dying moments as they pushed for a winner, but half-chances aside they failed to break the Baggies' resistance.