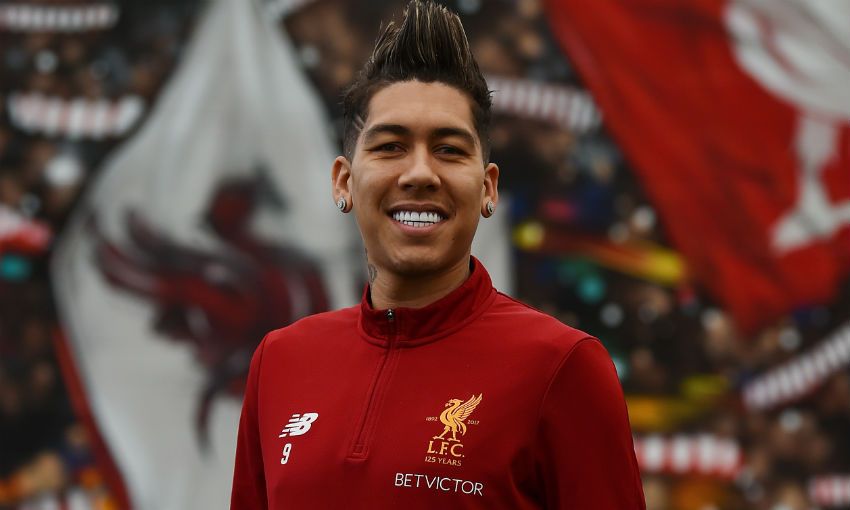 'Oxlade-Chamberlain is not someone you want to come up against'

As examples of self-evaluation go, Roberto Firmino’s upon signing for Liverpool has proven to be unerringly accurate.

“I’m a player who works hard and who’s constantly looking to support my teammates on the pitch,” the Brazilian pledged, during his first interview as a Red following his transfer from Hoffenheim in June 2015.

“I’m a player with an attitude and who knows how to play a tactical role with the team.”

Two-and-a-half years on, few observers would disagree. Certainly not his manager, anyway.

“He looks like the engine of the team. I really like how the crowd appreciate it. It’s really nice to see and he deserves it. He works so hard.”

But while the manner in which Firmino goes about his business on the pitch hasn’t changed since he swapped south-west Germany for north-west England, the starting position from which he does so most definitely has.

Firmino is no longer an attacking midfielder, no longer Liverpool’s No.11.

Firmino is now a striker. Both literally and figuratively, he is now Liverpool’s No.9.

After sitting down with Liverpoolfc.com at Melwood recently to discuss this evolution, the 26-year-old explains: “Since Jürgen Klopp became our manager, this has been my new position.

“I wasn’t a striker before but as I’ve been adapting into this position I’ve liked it more and more. I feel really comfortable and really adapted to it. I’d like to continue playing there for the rest of my career.” 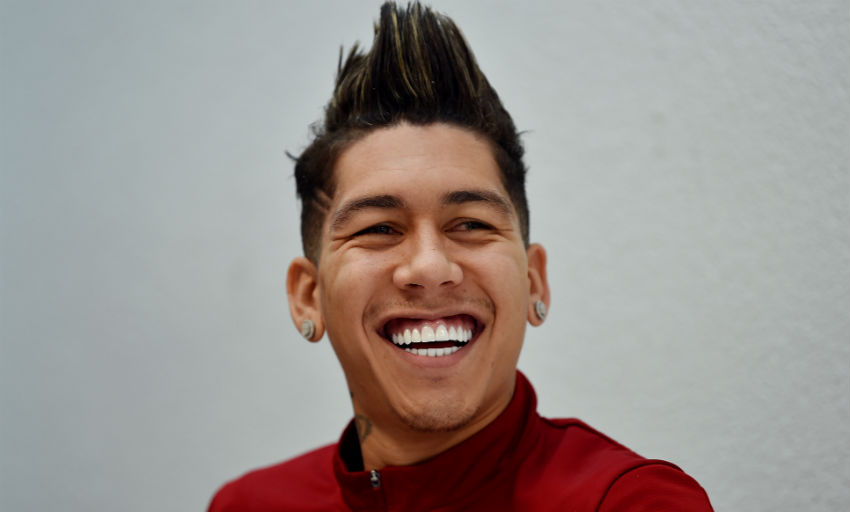 The increased level of familiarity with his role Firmino references can be measured quantitatively, too.

But, following last Sunday’s deft chip against Manchester City, Firmino has already netted 17 goals in only 31 matches during the current campaign, including seven in eight Champions League outings.

Firmino has a penchant for following Liverpool goals with unusual modes of celebration. In recent weeks, dance moves inspired by his legendary compatriot Ronaldinho have been supplemented by a kung-fu kick.

Most recently, these acrobatics could be witnessed in the aftermath of Mohamed Salah’s long-range strike that put the Reds 4-1 up versus City. 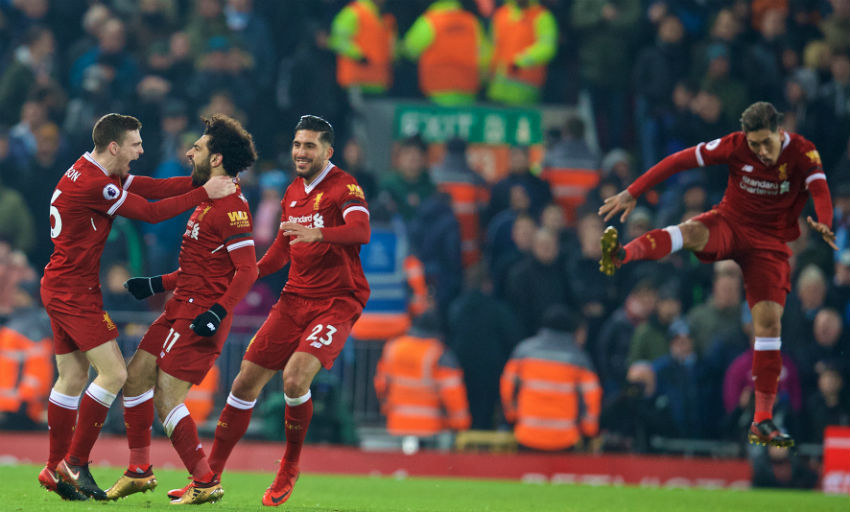 A broad grin breaks out across Firmino’s face as this particular subject is raised.

“Well, when I was a kid, I used to do a goal celebration that was a back-flip,” he reveals.

“I did it a lot when I was younger. It’s something I wanted to do [again], but maybe it’s best not to try! I did it up to four years ago, but not anymore!”

Goals, though, are not the only currency Firmino values highly.

“I’m always very happy to score and to give assists, give passes - that’s also hugely important,” he says.

“I work hard and I want to help my teammates. It’s not always the goal itself, though the goal is the fruit of the work we’ve done which is why of course when I score, it’s always good.”

While scoring and creating represent two primary aims for any forward, there is also another facet of Firmino’s game that so endears him to Liverpool fans.

The sight of the No.9 tracking back and hustling opponents out of possession is a regular occurrence at Anfield, as well as grounds across the country and beyond.

As Klopp acknowledged, appreciative applause and a chorus of ‘Bobby Firmino!’ from the Reds supporters in attendance generally follows.

The man himself credits his readiness to embrace the less glamorous side of the game to a combination of instinct and the way leaving home to join Hoffenheim at the age of 18 moulded him, both personally and professionally.

“It’s natural, of course - it comes from the cradle almost. I think though that the four years I spent in Germany changed my mentality a great deal. It made me become a lot harder,” Firmino notes.

The manner in which the Brazilian fulfils such tasks - with indefatigable diligence - is testament to his physical fitness.

Of Liverpool’s 33 matches across all competitions so far this season, Firmino started 28 - an impressive ratio for an elite club’s frontline striker.

He smiles and raps the table with his knuckles to gesture ‘touch wood’ when it’s put to him that he rarely seems pick up injuries. But is his robustness down to nature or nurture?

“I prepare very intensively for all games, physically and mentally,” Firmino asserts.

“I’m always eating the right food, I make sure I eat well, and I believe in God so I pray before all games that I’ll be alright. So I prepare on all levels for games.”

The esteem in which Firmino is held by Liverpool supporters is made clear every time the Reds play, but his popularity among the Hoffenheim faithful has not waned, either.

Last August, when Klopp’s side visited the Rhein-Neckar-Arena for the first leg of their Champions League play-off tie, the home fans chanted Firmino’s name before kick-off and then afforded him a standing ovation when he was substituted late on.

“It’s due to me as a person, I think, my charisma,” Firmino replies, when asked why he believes he is regarded so highly by followers of his clubs past and present.

“I always treat people well. I always stop, it’s never a problem when people want to speak with me, that’s OK with me - I’m never rude to anyone.

“And then on the field I give absolutely everything, I play with all of my heart and that’s why I think it is.” 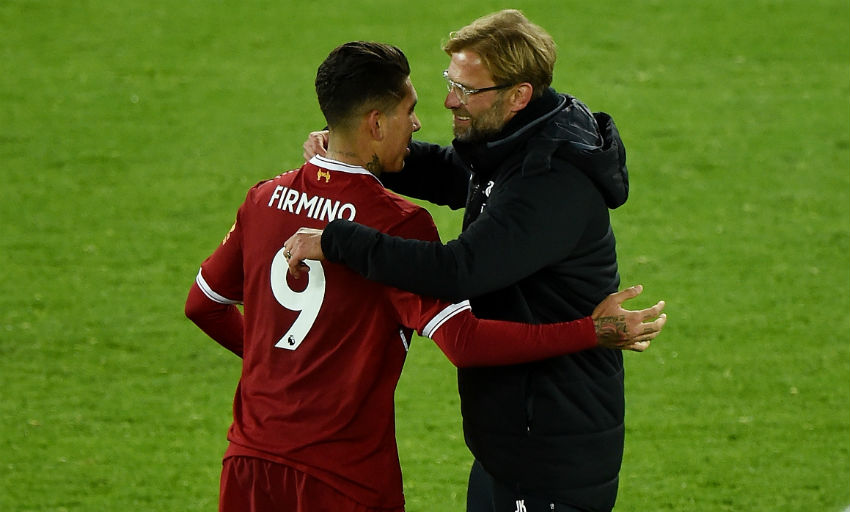 Firmino has spoken previously about the positive influence Klopp has had on his development since the boss’ arrival at Anfield in October 2015.

His manager, as detailed in the opening stages of this interview, admires his No.9 greatly and Firmino feels their similar understanding of football is a consequence of his own spell in the Bundesliga.

“When I was 18 and I was in Brazil, the offer came up to go to Germany and I didn’t think twice. It was a big adaptation, a new country, food, culture, but I didn’t go about it with any airs and graces and therefore I adapted,” he recalls.

“For me, it’s certainly helped and the German mentality that I have from my time there, that’s been very important [for his relationship with Klopp]. I’ve learned a huge amount with the manager, it’s a real honour to be with him.

What does he make of Klopp referring to him as the ‘engine’ of his side?

“I like to drop back and help defend because that then turns into attack, turns into goals, so I don’t mind being called the ‘engine’ of the team.”

Just as Firmino didn’t hesitate when the chance to join Hoffenheim arose, nor was the opportunity to move to Liverpool going to pass him by.

“It was over the years that I was seeing the Champions League, the Premier League, I watch all football so it was the same thing - when the proposal came up to join Liverpool, I didn’t think twice,” he says.

And, as any of Firmino’s 2.8 million Instagram followers would surely attest, the man from the tropical climes of Maceio and his family are well settled into life in a city located nearly 5,000 miles from home.

“I’m at peace [and] I think it’s important that you are, because if you’re happy at home with your family it means that you go onto the pitch also happy.”

Something that makes Firmino unhappy, though, is the spurning of goalscoring opportunities.

However, such short-term pain only serves to feed an insatiable hunger for long-term improvement.

“When I miss a chance or I misplace a pass, I always feel that I could’ve done better,” he admits.

“It’s never perfect. I always want to work hard and prepare the best for each game. And each goal that comes, that’s a consequence of the preparation we put in to it.”

Get your 'Firmino 9' home, away and third shirts in our online store>>>