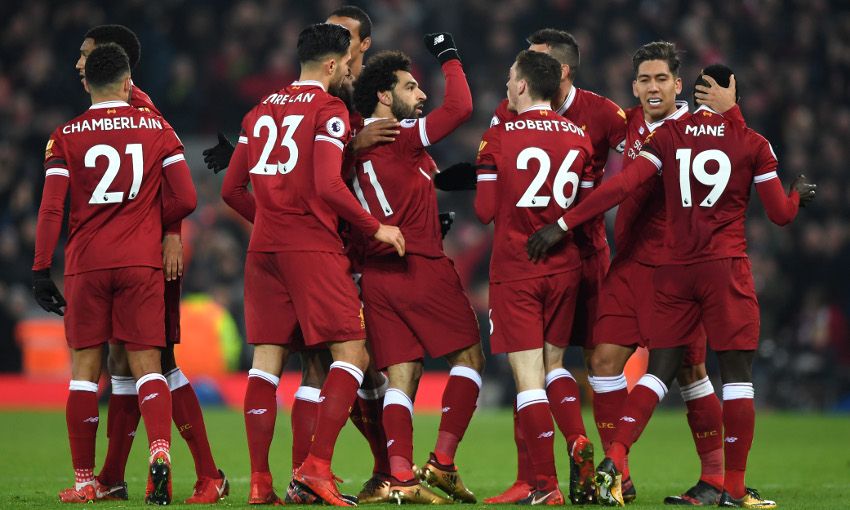 Liverpool 4-3 Manchester City - how it happened at Anfield

Liverpool stunned Manchester City to become the first team in the Premier League to defeat them this season – and extend their own unbeaten run to 18 matches – with a 4-3 victory at Anfield on Sunday.

Alex Oxlade-Chamberlain’s wonderful run-and-finish gave the Reds an early lead, but Leroy Sane restored parity before the interval when he cut in from the left and fired into the back of the net at the near post.

However, an incredible spell in the second half saw Jürgen Klopp’s side power into a 4-1 lead as they rattled the visitors.

Sadio Mane then cracked the post before driving into the top corner just moments later from the edge of the area after Mohamed Salah had won the ball back.

Salah then got in on the act himself, scooping Ederson’s poor attempted clearance over the goalkeeper and into the net from 40 yards.

Bernardo Silva and Ilkay Gundogan grabbed late consolations for City, but it was a day that firmly belonged to Liverpool.

Liverpool made three changes to the line-up deployed against Everton last time out. Dejan Lovren returned and captained the side with Virgil van Dijk ruled out due to a tight hamstring. Salah and Georginio Wijnaldum also started, while Loris Karius was selected in goal.

On a bitterly cold Anfield afternoon, the hosts set about looking to become the first team to overturn the league leaders in the division this season.

And just three minutes had elapsed when Firmino’s ball over the top released Mane into space. The No.19 couldn’t get it fully under control and it rolled for Salah, whose whack was blocked by the thigh of Stones.

Indeed, Liverpool had started the contest strongly – and they duly took the lead with nine gone.

Oxlade-Chamberlain pounced on possession 25 yards from goal, burst beyond two blue jerseys before arrowing a low shot across Ederson and into the bottom corner. 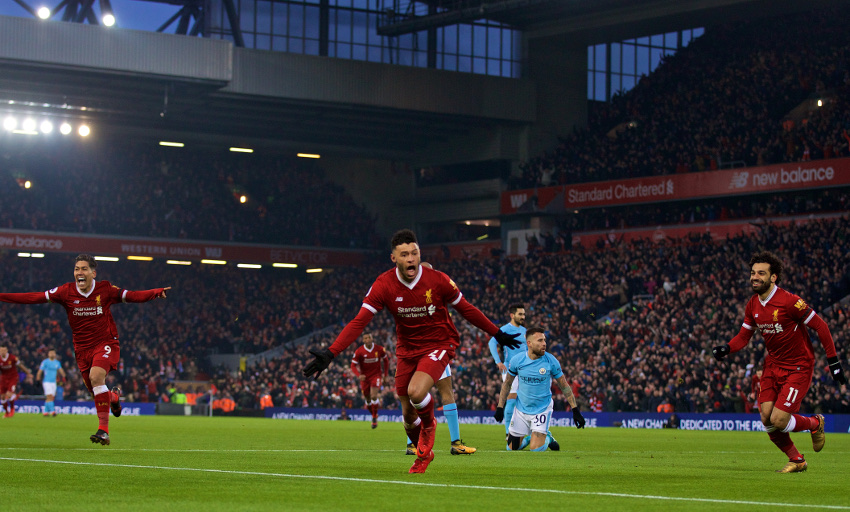 The Reds’ approach was causing Pep Guardiola’s side plenty of concern and Salah threated a second shortly after, but could only stab wide at the near post after twisting into space in the area.

But City demonstrated their ample threat for the first time in the contest when Kevin de Bruyne’s low ball across the area narrowly evaded Sergio Aguero in the centre before Sane had an effort deflected wide by Lovren.

The visitors were forced into a change on the half-hour mark, with Fabian Delph limping off to be replaced by Danilo – and could have been further behind just seconds later, but Firmino could only head Oxlade-Chamberlain’s cross wide at the front stick.

However, City drew level before the break when Sane chested Kyle Walker’s crossfield pass beyond Joe Gomez and sped into the box, evading the challenge of Joel Matip before firing the ball into the back of the net at the near post to ensure the sides went in on level terms at the break.

Liverpool restarted the game once again looking to get on the front foot, though they were thankful to see Otamendi’s looping header from a corner bounce off the top of the crossbar and behind in the early stages.

At the other end, Salah’s crisp snap-shot from a half-cleared corner was acrobatically saved by Ederson before the goalkeeper thwarted Oxlade-Chamberlain seconds later after the Reds forced the ball back into the danger zone.

But on the hour mark, Liverpool conjured up a rampant nine-minute spell that left Guardiola’s team shell-shocked as they raced into a 4-1 lead. 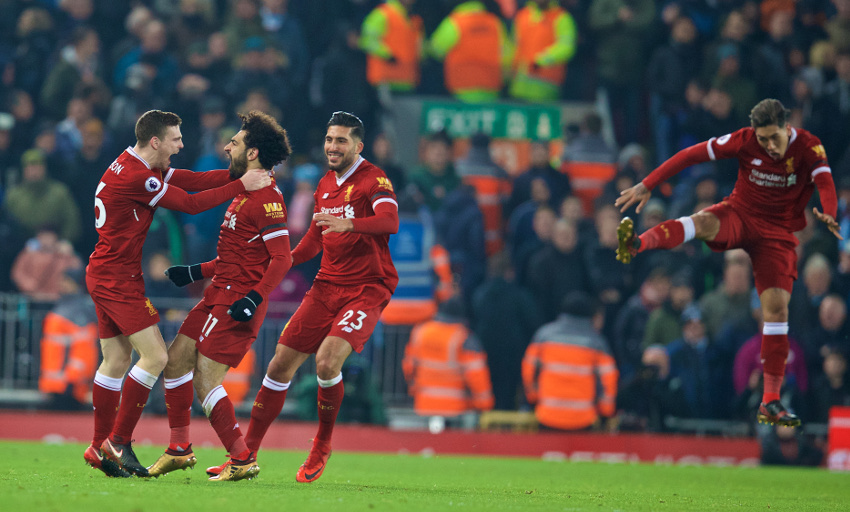 It began with Firmino out-muscling Stones to reach an Oxlade-Chamberlain pass before sublimely lofting the ball over the advancing Ederson in scenes reminiscent of a goal Robbie Fowler scored at Old Trafford two decades ago.

Mane then cannoned against the upright before finding the back of the net with an arrow of a left-foot finish after Salah had won the ball back.

And predictably, the Reds’ top scorer added his name to the goal tally when he pounced on Ederson’s low attempted clearance from outside his area and lofted it back over the goalkeeper and into the net from 40 yards.

With the game edging towards its conclusion, substitute Bernardo Silva swept in a loose ball inside the area to reduce the arrears while Gundogan nudged in a third for City, but Liverpool survived the late fightback to clinch a vital – and deserved – win.