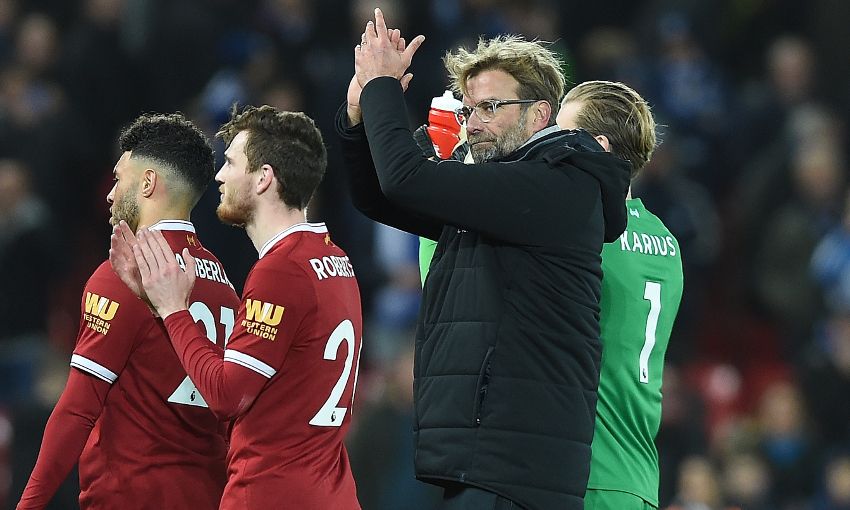 Jürgen Klopp was delighted by the way Liverpool reacted to an early concession to claim a hard-fought 2-1 victory over Leicester City.

The Reds fell behind within three minutes at Anfield as possession was squandered and Riyad Mahrez squared for Jamie Vardy to net at the Kop end.

But the hosts’ persistence had no limit and they were rewarded in the second half, with Mohamed Salah on target twice to secure all three points.

On his satisfaction with the comeback…

You don’t want to be 1-0 down but if you are 1-0 down that early in the game you want to see the reaction I saw tonight – it was the best reaction we showed so far after being 1-0 down. It was fantastic. I didn’t see one nervous player or any real reaction in a negative way. We kept on going and created and created and created, and played brilliant football. Defensively we were really strong. The main strength of Leicester is counter-attacking and quick transitions. If you are 1-0 down it plays into their hands and makes it more difficult. But we did really well. I liked the first half a lot apart from the result, to be honest.

Everybody in the stadium reacted in the right way, everybody saw, ‘wow, what a game!’ It was 100 per cent one of the best we have played so far. We knew at half-time we had to carry on; there were not a lot of judgments that we had to change this or that. We had to do it again and again and again, and keep our nerves – that’s the most important thing. Of course you get a little bit annoyed after missing the third or fourth chance. But they will come again. As long as we don’t concede, we always have the chance to score. That’s what we did – fantastic goals, two fantastic goals. They felt so good and felt so fair in this moment and deserved. So I’m really happy about it. 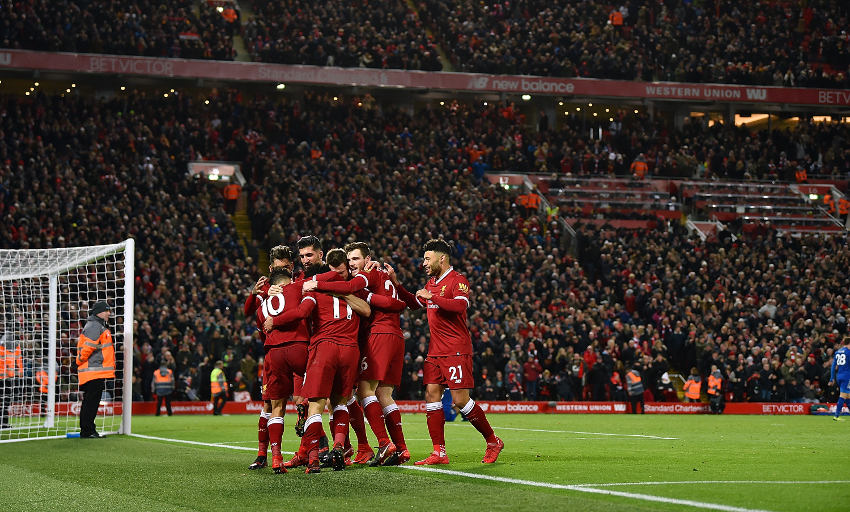 On whether Salah can maintain his form…

Yes, he can keep that standard, for sure. He is still a young player, he can improve. It’s not about scoring only, it’s about other situations as well. He’s so important for us. But he knows and I know that he couldn’t score if he didn’t have the fantastic support of all the other boys. We played fantastic passes. Sadio’s idea in the moment before Mo scored the first goal – I don’t think a lot of people in the stadium saw that it would be an opportunity. That was really important.

Yes, I think he can keep the standard but that’s normal, all the boys can keep the standard they have in the moment. It’s not that it’s only a run. The boys show their quality. We did that already a few times, the thing is more to get the results. That’s what we did tonight. To get this result, the most important thing was the defensive performance, so I’m really happy about the concentration level in all defending moments. They really were spot-on and aggressive in a very legal way. The yellow cards we got, especially the one for Emre, were not necessary I would say. It only showed the desire of the boys to turn this game. I was not happy about the yellow cards but the reaction was cool. It was a good team performance tonight.

That’s part of professional football. The really good players will always say that the challenge with other players for a position in the team will always help you. That’s how it is. We cannot go in a season with two centre-halves and hope nothing happens. The third one is already logical and if you have a fourth one then it’s even better. No player should and can play a whole season. At a club like Liverpool, we need to react in situations when a few of them are maybe not at their top level or injured. That’s what we did.

I don’t think the boys were nervous, I couldn’t see anything like that. They don’t have any reason to be nervous because I’m really happy about the development of these players. But we have to obviously fight and battle with the biggest teams in world football, so we cannot go there with a group of 11 and being best friends every day. We need to have a squad ready for that. That’s what we are building step by step.