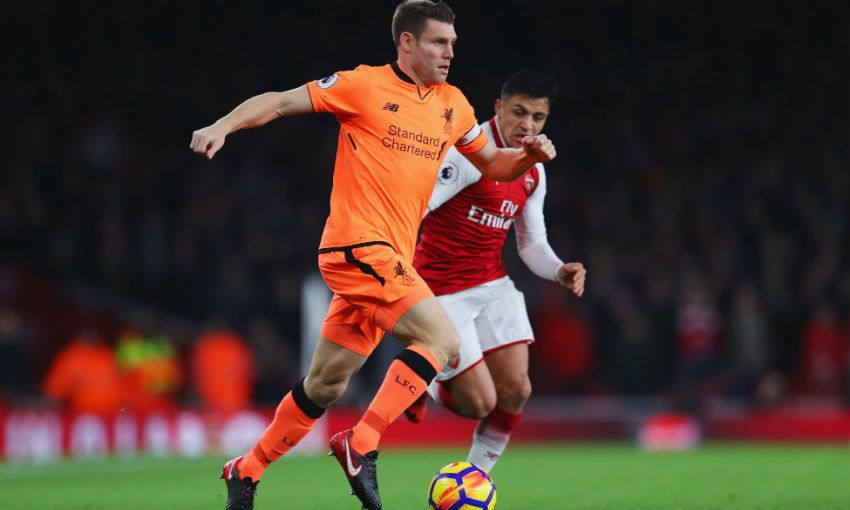 James Milner rued Liverpool's concession of a two-goal lead at Arsenal and called on the Reds to learn from Friday's 3-3 draw.

After Mohamed Salah doubled the visitors’ lead in the opening stages of the second half following Philippe Coutinho’s opener midway through the first period, Jürgen Klopp’s side looked set to claim a fifth successive away win in the Premier League.

However, a chaotic five-minute spell involving three goals for Arsenal turned the game on its head, before Roberto Firmino’s powerful 71st-minute drive ensured the points were shared.

Milner, who came on as an early substitute for the injured Jordan Henderson, was frustrated with the Reds’ failure to take all three points after being in such a strong position in the aftermath of Salah’s 21st goal of the campaign.

“I think when you’re in a position like that at this level you’ve got to see the game out,” the vice-captain told Sky Sports.

“We’ve got to be more boring. Obviously we’re very good going forward but those are the times in the game when you’ve got to tighten up, not make mistakes for those five minutes.

“All the goals were our fault, really, and that’s something we have to learn from and we need to do it quick, because it seems to be a thing for us this year.

“We play such good football and sometimes we just need to switch that off for five to 10 minutes in a game and learn about the game, sense the situations when it’s time to take it easy, play a bit tighter and keep the ball a bit longer rather than trying to break every time.

“Against good teams at this level you get punished and it happened today.”