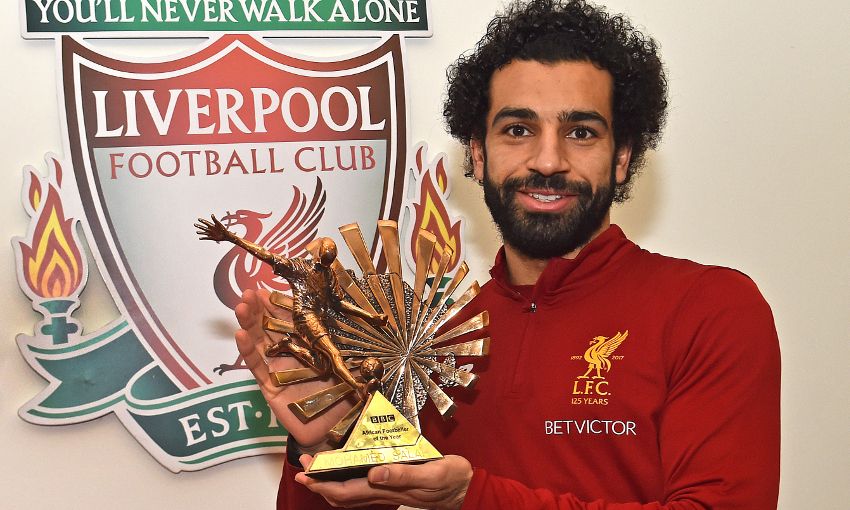 Mohamed Salah has today been crowned as the BBC African Footballer of the Year for 2017.

The Liverpool forward saw off competition from teammate Sadio Mane as well as Pierre-Emerick Aubameyang, Naby Keita and Victor Moses.

Upon being presented with the award by Jürgen Klopp at Melwood, Salah told the BBC: “I’m very happy to win this award, it’s a special feeling for me.

“I’d like to thank everybody; my teammates and the people I work with. I am very happy here at the club, I’ve had a very good start here. Also the manager has helped me to settle into the team.

“Last season I had a very good season with Roma, so I need to thank my teammates [there] and also my teammates in the national team.

“The people I work with are very professional and I’m happy with them.

Salah’s magnificent strike in Sunday’s Merseyside derby with Everton took his goal tally to 19 for the season so far, in just 24 games following his summer transfer from AS Roma.

13 of those have come in the Premier League, making him the division’s top marksman.

On the international stage, Salah’s heroics helped Egypt secure a place at the World Cup finals for the first time since 1990 as he scored twice – including a 95th-minute penalty – to record a 2-1 win over Congo in October.

“I am a really lucky person because I’ve had the opportunity to work with a few fantastic, outstandingly good players – and now I am happy I have it with Mo.

“When I started as a manager he was a kid and nobody could have imagined that we would work together.

“The good thing with him is he is still young, there is a lot of space for improvement and still a lot of potential for us to work on, but that’s how it should be.

“It is a big pleasure to work with him and the other guys together. On a good day, we make it easy for each other because that’s how football should be.”