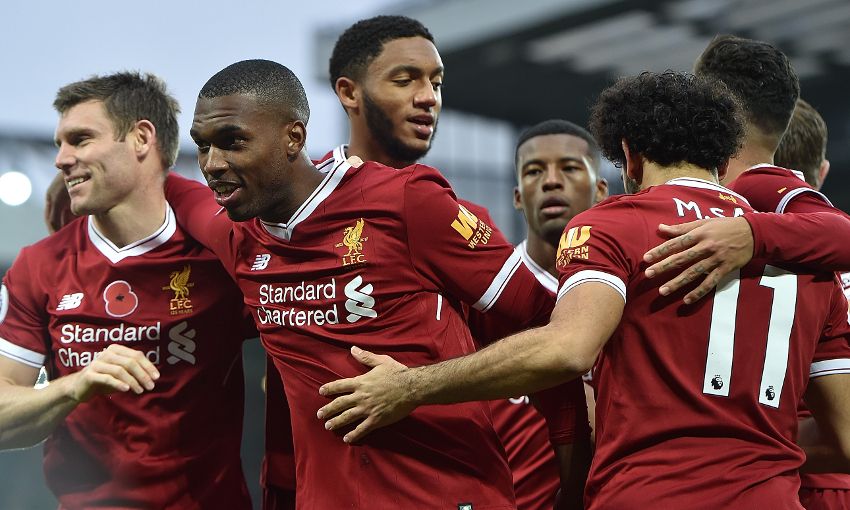 Liverpool returned to winning ways in the Premier League on Saturday afternoon as they beat Huddersfield Town 3-0 at Anfield.

After a low-key first half in which Mohamed Salah missed a penalty, Daniel Sturridge gave the Reds the lead shortly after the restart with a neat close-range finish from Tommy Smith’s wayward header.

Roberto Firmino then glanced in a second soon after, meeting James Milner’s corner at the near post with his head.

Georginio Wijnaldum wrapped up the scoring when he cracked in Liverpool’s third off the underside of the bar to seal victory.

Wijnaldum returned to the starting line-up alongside Sturridge, with Emre Can dropping to the bench and Philippe Coutinho being ruled out through injury.

There was also late change at the back with Ragnar Klavan coming in to replace an injured Dejan Lovren just before kick-off. Youngster Ben Woodburn was promoted to the bench as a result.

The game was slow to come to life, with a resilient Huddersfield restricting Liverpool to few clear-cut opportunities.

Alberto Moreno was the first home player to test the Terriers’ backline when he whipped a low ball towards the front post, however Firmino couldn’t get an effort on goal.

Next, Milner found space down the right flank and picked out Sturridge with a deep cross, but the England forward hit his shot into the ground and over the bar.

Just before the half-hour mark Salah and Firmino played an intricate one-two in the Huddersfield area with the former placing his effort directly into the gloves of Jonas Lossl.

Milner was then picked out by a long-range pass from midfield partner Jordan Henderson, but his low curling effort was well gathered by the Terriers’ goalkeeper.

With around five minutes of the first half remaining Liverpool were awarded a penalty after Smith was adjudged to have brought down Firmino from a Reds set-piece.

Salah stepped up to the spot but his drilled effort towards the bottom right was well saved before Henderson’s rebounded effort hit the left upright.

It didn’t take Liverpool long to take the lead after the break as they pressed the Terriers with a much higher tempo.

Sturridge found himself on the end of a diverted Moreno pass and the No.15 coolly lofted the ball over an oncoming Lossl to give the Reds the advantage - the 100th club goal of his career.

The game then came to life for the home side after that, with a bombardment of passes and crosses into the Huddersfield area making it hard for the visitors to relieve the pressure.

Just before the hour mark the lead was doubled as Liverpool looked to gain control of the game; a corner from Milner found the head of Firmino, who guided the ball home with a precise header.

Salah then came close to getting on the scoresheet as he neatly turned away from his marker before hitting the outside of the post.

Huddersfield had a great opportunity to get back into the game when Moreno gave away a free-kick just outside the Liverpool area; however, Tom Ince’s effort sailed over Simon Mignolet’s bar and just after that it was three goals to the good for the home team.

Liverpool went straight on the attack and, in a lovely team move, Salah found Wijnaldum in the area, who slammed the ball off the underside of the crossbar and into the net to seal the win.