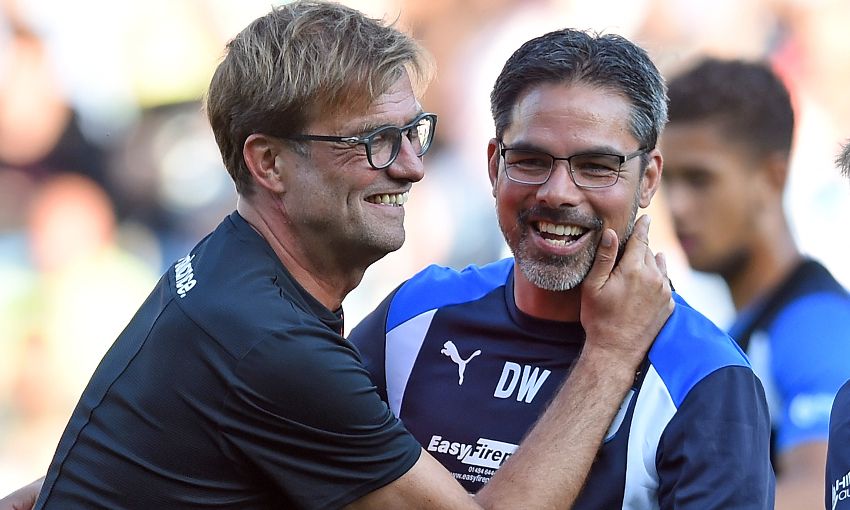 Jürgen Klopp has explained why he’s spoken a little bit less to close friend David Wagner this week as the duo prepare to go head-to-head on the touchline when Liverpool take on Huddersfield Town at Anfield on Saturday.

The Reds boss is delighted to have the opportunity to come up against his old pal in the Premier League, but admits they’ve had to place their relationship on pause as they both set about preparing their sides.

“It was not as much as it is in other weeks, to be honest,” Klopp said when asked how much he’d chatted to Wager this week.

“It’s exciting, 100 per cent, as you can imagine. I am really happy about this that we play now against each other in the Premier League, nobody would have expected that 20 or 30 years ago, so that makes it even nicer.

“He is my best friend and we have a real close relationship but it changes nothing for the game.”

Klopp and Wagner’s friendship began when the pair played together for FSV Mainz 05 back in the early 1990s.

They later became managerial colleagues at Borussia Dortmund before both journeyed west to take up roles in England.

Nevertheless, Klopp insists their relationship will have no bearing on tomorrow’s Anfield contest.

“Our friendship will last for the rest of our lives, whatever happens in this game. I want to win that game and that means we have to beat Huddersfield and that’s it. I know him well him enough to know he thinks exactly the same, so I have no problem with that, that’s how it is all the time.

“Nothing that we will say to each other in the game will stay a second longer in our minds after the final whistle. We played together and I said worse things to him than any other person in the world and we are still friends, so that’s not a problem. I was the defender and he was the skilled striker with not the perfect attitude, so I helped him a little bit.