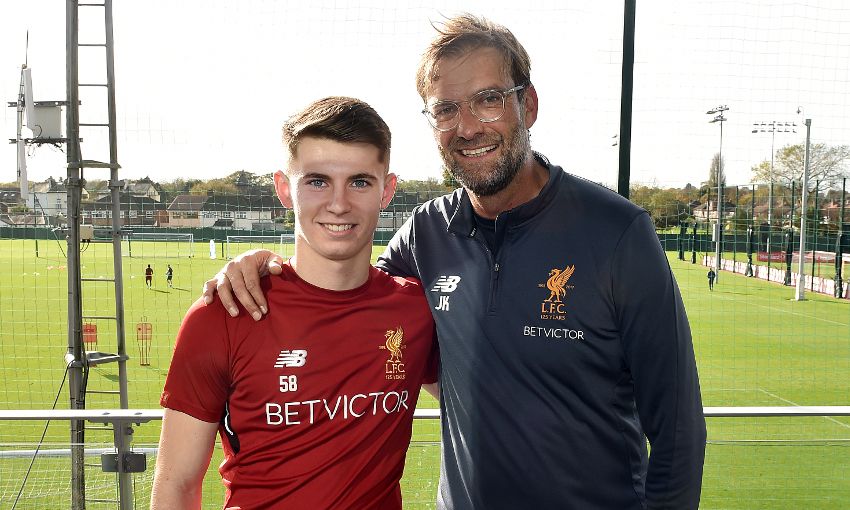 Jürgen Klopp today described Ben Woodburn as the 'perfect balance of talent and attitude' as the youngster committed his long-term future to Liverpool by signing a new contract.

The 18-year-old inked the fresh deal at Melwood on Wednesday afternoon, taking the latest step in a remarkable journey over the last 12 months.

Woodburn became Liverpool’s youngest ever goalscorer last November when he netted in a League Cup tie with Leeds United in one of nine first-team appearances before going on to be voted the club’s Academy Player of the Year.

At international level, the forward made his senior bow for Wales and marked it with a goal in a World Cup qualifier against Austria in September.

Reacting to news of Woodburn’s new contract, Klopp told Liverpoolfc.com: “This is brilliant news, although without sounding complacent about it, it is absolutely not a surprise.

“Ben knows how committed we are to him and he and his family know this is the best environment for him to grow, learn more and become even better and better.

“What a talent this young man is. We don’t call him the Prince of Wales for nothing, although judging by his facial expression when we do he would probably be happy if we stopped with this!

“Ben is that perfect balance of talent and attitude. One of either is OK - to fulfil your potential at the very highest level you need to have the maximum of both.

“I like that he is prepared to be patient. He has already had some big playing moments, for Liverpool and of course Wales. But when we ask him to go to the Academy and do things like play for Stevie’s [Gerrard] U19s in the UEFA Youth League, on nights we play Champions League football, he approaches it so well.

“Alex Inglethorpe and all the staff at Kirkby should be very, very proud of the contribution they make to these young players’ progress. It’s a brilliant environment and culture for an ambitious young player.

“It’s quite poetic that Ben signs this contract on the same day that Rhian Brewster scores another hat-trick for the England U17s in a World Cup semi-final against Brazil. I love this.”