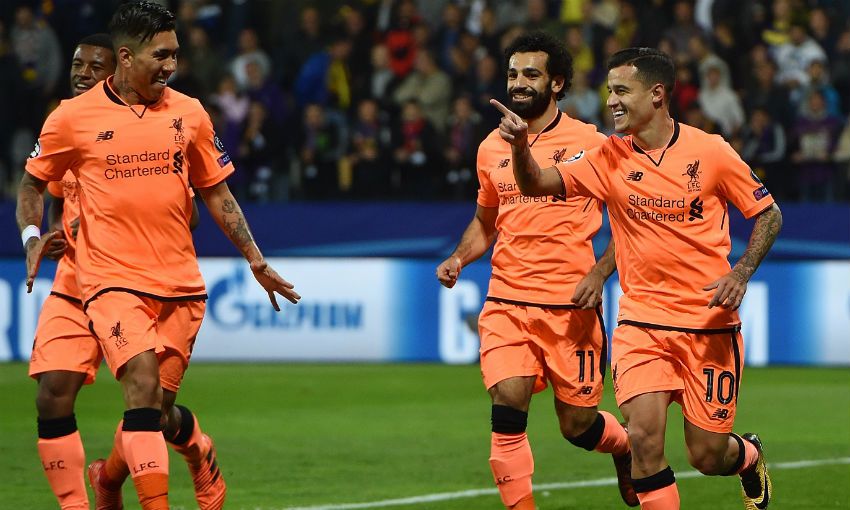 Liverpool collected a first win of the Champions League group stages with an emphatic 7-0 victory over Maribor in Slovenia on Tuesday night – setting a club record in the process.

The Reds enhanced their chances of making the next phase of the competition in style as they followed up draws against Sevilla and Spartak Moscow with a commanding triumph at the Ljudski Vrt stadium.

Salah grabbed a second before the break prior to Firmino meeting Coutinho’s free-kick from the left with a flick header following the restart for the fifth.

The scoring was completed when substitutes Daniel Sturridge and Alex Oxlade-Chamberlain combined to enable the latter to net his first Liverpool goal and Trent Alexander-Arnold thumped in a seventh.

The seven-goal margin makes it the Reds’ biggest ever away victory in European competition; however, of more concern to Klopp and his players will be the fact the success has significantly bolstered their prospects in Group E.

Klopp made three changes to his starting line-up from the side deployed against Manchester United on Saturday, with Loris Karius, Alexander-Arnold and James Milner coming into the XI in place of Simon Mignolet, Joe Gomez and Jordan Henderson – all of whom were on the bench.

Liverpool got the game under way in Slovenia knowing a win could ultimately prove vital to their hopes of reaching the next stage of the Champions League, following draws with Sevilla and Spartak Moscow.

A good start, therefore, was the order of the day – and it was exactly what the Reds delivered after just four minutes at the Ljudski Vrt stadium.

Salah’s industry and tenacity down the right took him into space inside the area, and he rolled the ball across goal to allow Firmino the easiest of finishes from four yards out.

If the opener was one of simplicity, the second – which followed just nine minutes later – was a much more complex manoeuvre.

Firmino turned into space in the centre of the park and switched play out wide to Salah, who in turn fed it down the line into the path of Milner’s maraud forward. The captain for the night hooked the ball back towards the edge of the area, where Coutinho arrived to sweep a volley into the back of the net. 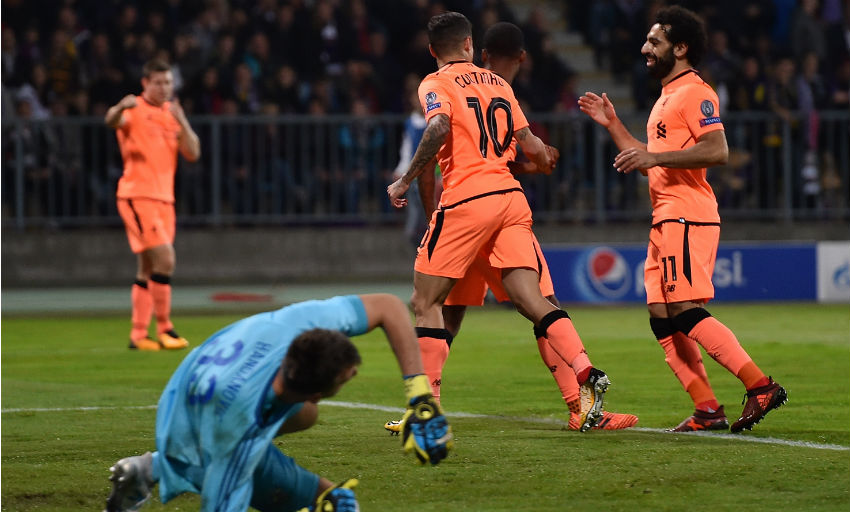 And despite their storming start, there was to be no let-up in Liverpool’s chance creation as Firmino flicked one agonisingly wide of the post before Alberto Moreno crashed a drive into the side-netting.

But a third soon arrived when Firmino slipped Salah into space inside the area, and he finished clinically beyond Jasmin Handanovic from close range with just 19 minutes elapsed.

And by the interval, the Reds had registered a fourth. Coutinho’s magnificent pass to find Moreno’s burst into the left channel of the area allowed the Spaniard to drill into the middle, where Salah tapped in just ahead of Firmino.

It was the first time in the club’s history they’d scored four goals away from home before half-time in Europe – and the first time since December 2006 they’d achieved it in any competition since doing so at Wigan Athletic.

Liverpool picked up where they’d left off as the second half got under way – and they didn’t have to wait too long for number five.

Nine minutes, in fact, as Firmino met a Coutinho free-kick from the left with a glancing header across goal and into the far corner.

Oxlade-Chamberlain entered the action shortly after, replacing Salah, before Sturridge took the place of Firmino and Dominic Solanke that of Georginio Wijnaldum.

Oxlade-Chamberlain went close to opening his Reds account on 76 minutes, but had a low whack blocked at the near post by Handanovic prior to Coutinho having a nudge cleared off the line by a home defender.

However, a debut strike did duly arrive for the No.21 when Sturridge punished a poor clearance by sliding Oxlade-Chamberlain through, and he steered into the net.

And on a magnificent night’s work for Klopp’s charges, there was still time for Alexander-Arnold to thump in a seventh via a deflection to put the seal on a significant evening for the Reds in Slovenia.