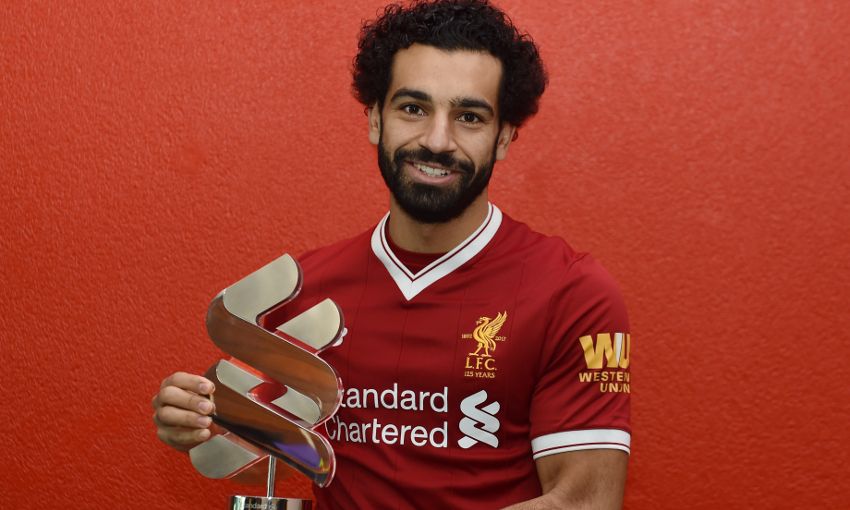 Mohamed Salah returned to Melwood on Thursday morning to collect his second Standard Chartered Player of the Month award of the season - and was adamant Liverpool are ready to fight to improve upon their recent run as they reconvene following the international break.

Fresh from his heroics in helping Egypt secure a place at next year’s World Cup finals for the first time since 1990, the No.11 picked up the Reds’ star man accolade for September.

Salah tallied 41 per cent of the vote on Liverpoolfc.com, seeing off competition from Philippe Coutinho (23 per cent) to claim the prize for the second month running.

September ultimately proved a largely frustrating month for the Reds with just one win in seven matches stretching into October, but with Manchester United next up this Saturday lunchtime, the forward was eager to outline why he and his teammates are determined to get back on track.

“I have to say thank you very much to the fans and I am happy to win it,” Salah said upon being presented with the trophy at Melwood. “But now we have to keep fighting and improve our results a little bit.

“It’s a big game on Saturday, everyone in the world will watch the game. It’s a big game for us too because we have to keep fighting and improve our results, as I said. I hope we can get the win.

“We always fight in each game, but this game is a big game and can make a difference for us. We have to improve our place in the table. We have to fight and try to win the game.”

Salah will be aiming to pick up where he left off when he returns to action on Saturday after his two goals helped Egypt to a historic 2-1 victory over Congo last weekend.

The Liverpool attacker sealed a place at the World Cup in Russia for his nation by confidently sweeping home a 95th-minute penalty, sparking incredible scenes of celebration.

“It was a great, great feeling to help my country play in the World Cup after a long time,” he said.

“That’s something huge for us. I am very happy and very proud of it.”

Liverpool will go into the clash with United on the back of the news that Sadio Mane is facing up to six weeks out of action after sustaining a hamstring injury while on international duty with Senegal.

Salah reflected: “I texted him when he was at the national [team] and then when he came back. He told me then he was injured, so that’s bad news for everyone.

“But that’s football and anything can happen. Now we have to focus on the game and keep moving forward.”