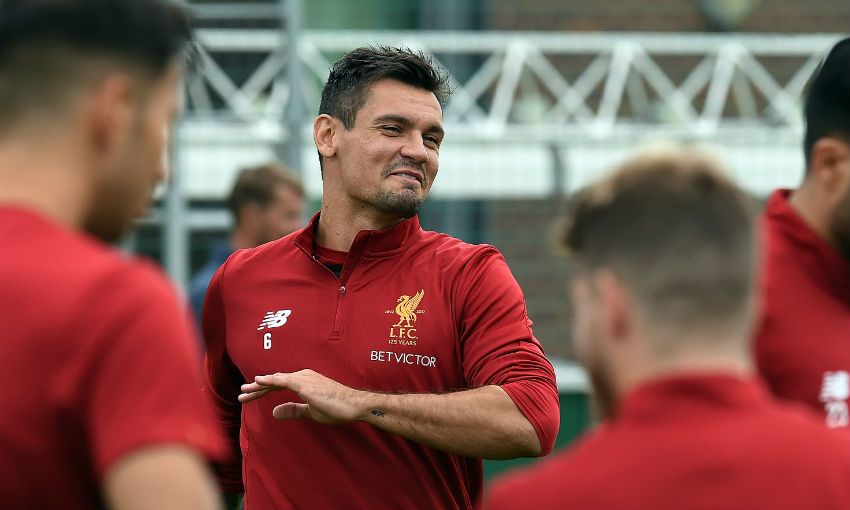 Anfield was at its raucous best when Hoffenheim visited in midweek - and Dejan Lovren expects more of the same against Arsenal on Sunday afternoon.

The occasion of a crucial European game, coupled with a devastating attacking display from Liverpool, meant the home fans created a vibrant, partisan atmosphere as the Reds sealed their spot in the group stages of the Champions League by defeating their Bundesliga opponents 4-2.

Leading 2-1 from the first leg in Germany, Jürgen Klopp’s side produced a scintillating start to Wednesday’s match that saw them score three times without reply in the opening 21 minutes.

Naturally, that only served to increase the volume coming from Liverpool’s supporters who, Lovren believes, will be in full voice again for today’s meeting with the Gunners.

“I’m not worried about the big games, I would say, even with the crowd because everyone wants to beat the big teams,” the centre-back explained to Liverpoolfc.com.

“The crowd wants to see that we give our best, which we always do against all the teams, but it’s definitely different when you play against the likes of Arsenal, Man United and Everton. I think everyone is ready.”

Games between Liverpool and Arsenal tend to be high-scoring affairs, with the last three Premier League clashes featuring 17 goals - something Lovren feels is down to the fact that both teams back their ability to win any match.

“The good thing is they’re a team who likes to play football,” he said.

“It’s a good thing for us because we can play high pressure against a team who likes to play so if they’re ready to play and they know that we’ve left a couple of players up front who are quick, let’s see what will happen, but definitely it will always be an interesting game against Arsenal.

“They also have quality players who can change the game in every moment.”

Arsene Wenger has started a back three in each of Arsenal’s two top-flight fixtures so far this season - a system Sadio Mane, Mohamed Salah and Roberto Firmino thrived against in the game with Hoffenheim at Anfield.

However, Lovren isn’t overly concerned with how Liverpool’s opponents will line up this afternoon.

“You never know what will happen, maybe he will change again the system, but whichever system they play we will not focus on that, we will focus on us, to try to score goals and beat them in every position,” the No.6 insisted.

“They’re always dangerous also [though], they have really good players who can decide a game in any moment, like Sanchez, Ozil, Lacazette, Chamberlain, everyone, so let’s see what will happen.”

One Arsenal man Lovren knows plenty about is striker and summer signing Alexandre Lacazette, who he played alongside at Lyon.

“He’s a fantastic player who played in Lyon for many years. When I played with him he wasn’t the striker he is today, but that’s normal because he was young,” he said.

“Of course he’s still young, but at that time you get some experience and he showed in the last two seasons the reason why he was one of the best strikers in the French league and also the reason he’s one of the big stars of the national team.

“He’s a player who has good movements, likes to play in behind defenders, quick, good with the ball, so it will be quite interesting to see him again after many years of not playing against him.”

Lovren stars alongside former Liverpool midfielder Ray Houghton in the latest episode of #LFCWORLD. Watch episode three throughout the week on LFCTV or on demand on LFCTV GO.