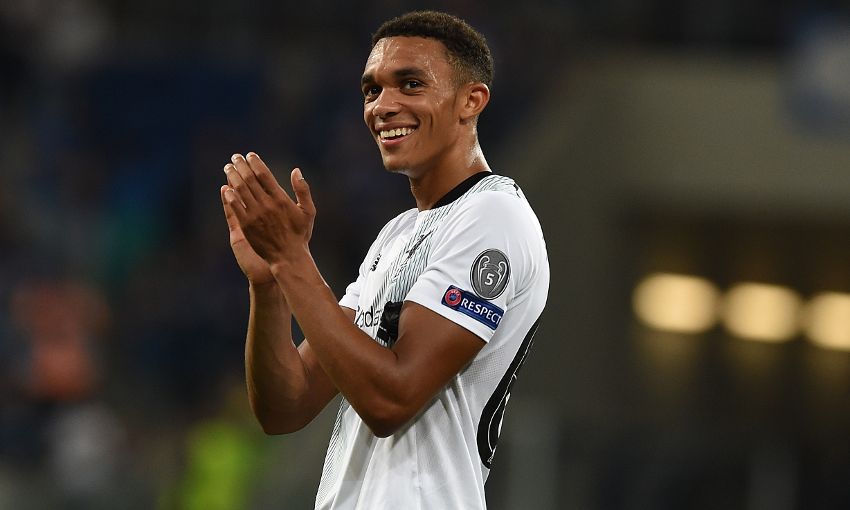 Trent Alexander-Arnold will forever remember this night in Germany.

The Liverpool full-back shrugged off the size of the occasion against Hoffenheim, on his maiden European appearance for the club, with a composed display that was punctuated by a stunning goal.

Taking charge of a free-kick situation 10 minutes before the break, Alexander-Arnold sent the ball swerving around the wall and firmly into the bottom right corner for the opener at Rhein-Neckar-Arena.

His sublime effort set Jürgen Klopp’s team on their way to a crucial 2-1 victory in the first leg of the Champions League qualifying play-off with the Bundesliga outfit.

“Obviously it’s a thing of dreams to make your European debut for your boyhood club. And to mark it with a goal as well was very special for me,” Alexander-Arnold told BT Sport.

“But, more importantly, we got the win. We’ll still be a little bit disappointed with the late goal, but it’s always good to take a lead back to Anfield.”

The Scouser added: “I kind of got egged on to do it, to be honest. I didn’t put my hand up at first. But I had the confidence to finally take it and it paid off!”

Alexander-Arnold had shown his set-piece ability during the Premier League clash with Watford last weekend – and Jordan Henderson revealed it was no surprise to see the thriving 18-year-old hit the net.

“He was outstanding last season and he has come back and gone up another level again in pre-season, he has been brilliant,” said the captain.

“Last week I thought he was outstanding and then tonight, brilliant again. The free-kick is no coincidence. He has been doing that every day in training for the last few weeks – that’s why he’s on them. He’s done it on the big stage, so fair play to him.

“He’s just got to keep working hard and putting in performances like that.”