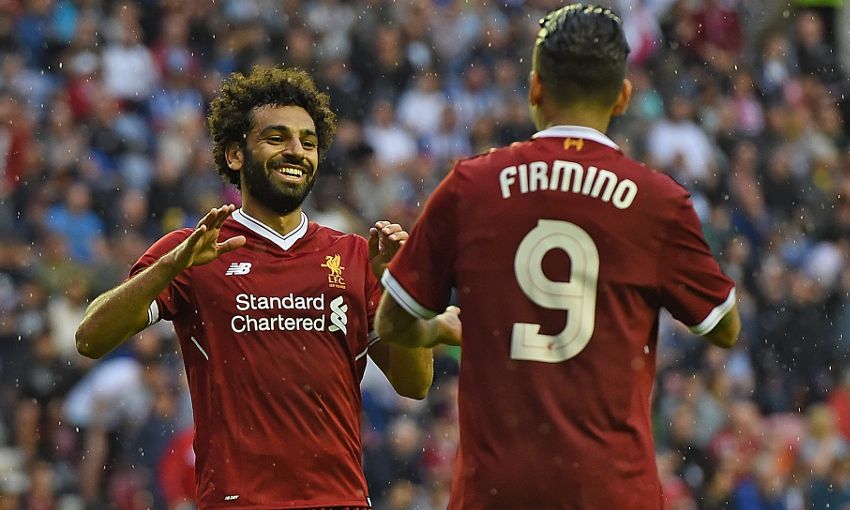 Mohamed Salah marked his Liverpool debut with a goal as Liverpool played out a 1-1 draw at Wigan Athletic in their latest pre-season friendly on Friday night.

The Egypt international grabbed an equaliser on the stroke of half-time when he tapped in from Roberto Firmino’s pass after the Reds had earlier fallen behind to Alex Gilbey’s opener.

There were no further goals in the clash at the DW Stadium – which featured several returning players for Jürgen Klopp’s side – although Dejan Lovren did hit the post with a header in the second half.

As at Tranmere, the team news confirmed Liverpool would field different elevens in each half – with the opening line-up including new signing Salah for the first time, as well as Philippe Coutinho, Adam Lallana and Simon Mignolet.

Meanwhile, Lovren and Divock Origi were in to make their maiden appearances of the summer after the break.

Less than 60 seconds had elapsed when Salah produced a glimpse of his trademark blistering speed – bursting down the right before striking over the angle of post and bar.

Soon after, Trent Alexander-Arnold brought a smart stop out of Christian Walton before Lallana dragged an effort wide of the post in a bright opening for the visitors.

But the home side were not without their threat as Omar Bogle clipped inches off target and Gilbey perhaps should have done better when a loose ball broke to him inside the area and he slid behind for a goal kick.

However, Gilbey made no such mistake on 21 minutes when he neatly tucked Bogle’s miscued shot at a free-kick into the far bottom corner to hand Wigan the lead.

At the other end, Firmino twice went close to an equaliser for the Reds. First, he was thwarted by a point-blank save from Walton prior to uncharacteristically skewing wide after an impressive, swift move involving Coutinho, Salah and Lallana had prised open the opposing defence and left him facing goal.

Lallana also had an effort of his own kept out by the goalkeeper when his diving header was met by the gloves of the home custodian.

Finally, though, Liverpool grabbed an equaliser seconds prior to half-time. Coutinho picked up possession 25 yards form goal and slipped a pass beyond the Wigan defence for Firmino to chase. One-on-one with the goalkeeper, he unselfishly elected to square and allow Salah to tap in a goal on his debut.

Klopp made the pre-planned 11 changes at the interval – and within seconds of the restart, Origi went agonisingly close to putting the guests in front, but his shot from a tight angle rolled across the goal line.

On 68 minutes, Wigan substitute goalkeeper Owen Evans was called into action to turn away a low curler from Daniel Sturridge, but clear-cut chances were not as frequent in the second 45.

That said, Dejan Lovren went close to forcing to issue when his header from James Milner’s centre from the right clipped the outside of the post and bounced behind.

Next, with three minutes left to play, Sturridge was narrowly off target after Jordan Henderson’s pass played him into space on the right corner of the area.

And in stoppage-time, James Milner was denied a winner when his attempt to steer home Marko Grujic’s neat flick was repelled by Evans’ save, ensuring the contest ended in a draw.