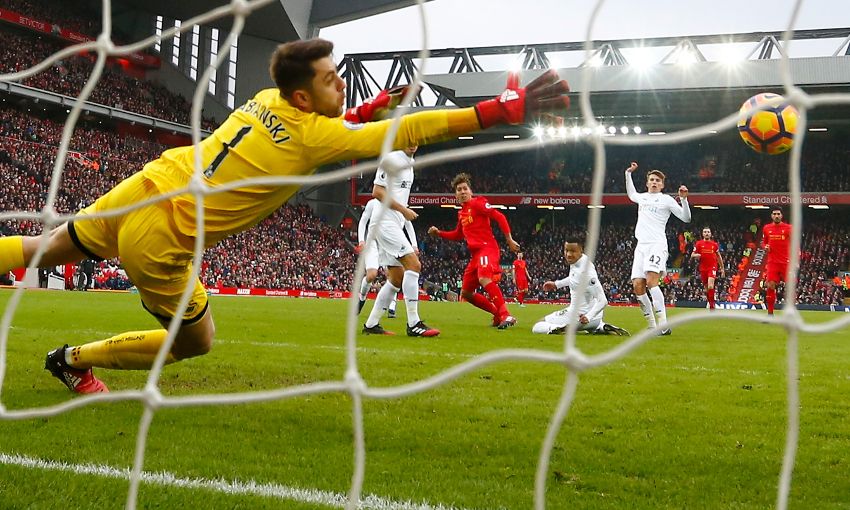 Roberto Firmino has revealed his favourite three goals of the dozen he tallied for Liverpool during 2016-17.

The Brazil international contributed a number of exquisite strikes as the Reds secured a fourth-place finish in the Premier League and thereby reached the Champions League qualification play-off round.

His clinical hit at Stoke City in April was as important as it was masterful, Firmino lashing a looping blast into the roof of the net from Georginio Wijnaldum’s long ball to seal a 2-1 comeback victory.

But the No.11 himself rated another effort even higher.

“If you asked me for the best three goals I scored, I’d say Palace away in third place, the one at Stoke next, and then that second goal against Swansea,” he states in the new edition of the official Liverpool FC magazine.

“We were 2-1 down when Gini won the ball on the left and I realised that he was going to cross it. I had to react very quickly and I dominated the ball with my chest. My only thought then was to shoot straight away.”

A week after that crucial winner against Stoke, it was Firmino who sealed maximum points for Liverpool again at West Bromwich Albion with a back-post header.

By that stage of the season Jürgen Klopp’s side were playing a more resolute style of football as they attempted to ensure their coveted return to Europe’s elite club competition.

And Firmino rejects any personal credit in favour of accentuating the work of the whole team, who did not want to endure another campaign without continental action.

“[They were] important goals but how we performed as a team was more important, adapting to games against difficult opponents away from home to get the right result,” he says.

“It was great to reach the last game and have something important to play for. Last season it was sad that we had no European games but we worked hard and now we’re really looking forward to them next season.

“We’ll have more games to play but, as I’ve said before, I would play twice a week if I could. It shows the team is moving in the right direction.”