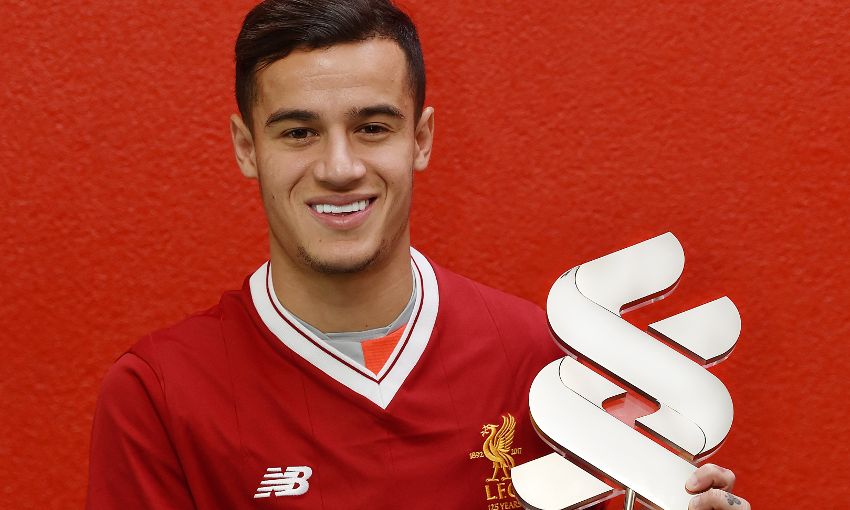 Four goals in five appearances and an outstanding showing in the Merseyside derby saw Philippe Coutinho today named as the Standard Chartered Player of the Month for April.

The forward clinched the accolade for the second time this season after winning the fans’ vote in a poll on this website.

Coutinho tallied 37 per cent of the total, seeing off competition from Simon Mignolet (31 per cent) and compatriot Roberto Firmino (18 per cent) to claim the prize.

“I am very happy, as always, to win this award,” he told Liverpoolfc.com upon being presented with the trophy at Melwood. “It’s always a source of happiness to win a prize like this because it is recognition of my work. I hope to carry on helping my team with good performances.”

Despite his prolific record in front of goal during the month, and ultimately winning this award, Coutinho candidly acknowledges he feels there were times when he could have performed even better.

“I always try to improve myself,” he continued. “As I’ve always said, I am always trying to get better and better.

“Looking back, I think I could have done better at times because my mind thinks in this way and I always want more and more and more from myself. It was a very good month, but we still have three games left. I hope to contribute, to help the team and give my best.”

One of Coutinho’s highlights during the month was undoubtedly his stunning solo goal against Everton.

Collecting the ball midway inside the Blues half, he danced beyond several opposing challenges before cutting inside and curling into the top corner to put the Reds 2-1 in front.

“Of course, that goal I scored was a beautiful goal,” he smiles. “A very important goal against Everton. To score in a derby is always a huge pleasure and important.

“I am well aware a goal against Everton is a reason for a lot of happiness! It was a good goal!” 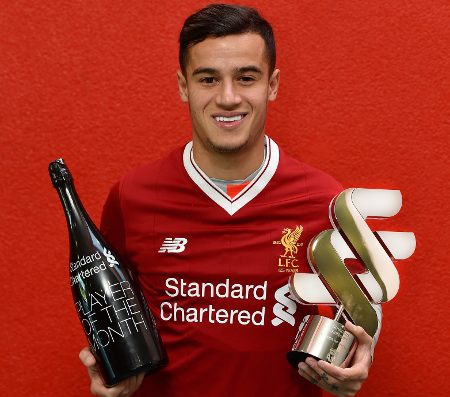 That win over Everton meant Liverpool began April with a bang, recording an emphatic 3-1 victory over their neighbours.

A home draw with Bournemouth followed, before back-to-back away wins at Stoke City and West Bromwich Albion.

A disappointing defeat in L4 to Crystal Palace concluded the month, but Jürgen Klopp’s side maintained their push for a top-four finish – and Coutinho believes they aptly demonstrated different aspects of their game.

He said: “Every game in the Premier League is very difficult and complicated. Each team has their own qualities and their own style of play. For this reason, our manager tries to prepare us for every match by taking into account the team we’re going to play against.

“In April, it was wins in different ways for us, but the main thing is always to achieve a win and get the three points. We are doing our very best to keep ourselves among the top four, so it doesn’t matter how our opponents play – what matters to us is getting the three points, that’s the main thing.”