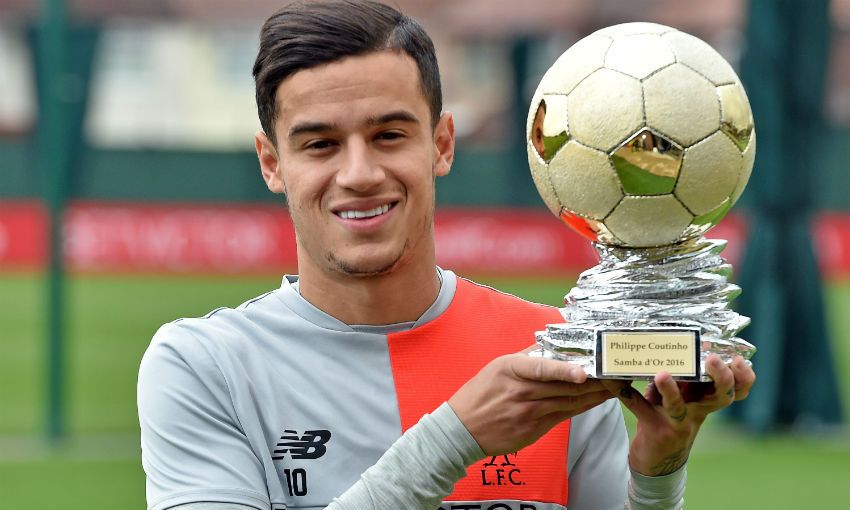 Philippe Coutinho has expressed his pride at joining an illustrious group of Brazilian players to be honoured with the Samba Gold award.

It was announced in December that Liverpool’s No.10 had followed in the footsteps of the likes of Kaka, Thiago Silva and Neymar in scooping the 2016 edition of the annual prize by earning 32.13 per cent of the vote in a combined poll of journalists, current and ex-professionals and supporters.

And upon being presented with the trophy by Sambafoot at Melwood on Wednesday, Coutinho - who scored 18 goals for club and country throughout the calendar year - spoke of his delight at becoming only the sixth winner of an award that was launched in 2008.

Coutinho also reflected on 2016 from a collective point of view, with the playmaker feeling the year was, on the whole, a positive one for Liverpool.

“It was a good year. As a team, we played very well and we managed to get to two finals,” he added.

“Unfortunately, we did not win the finals, we lost. That was a very difficult time for us to deal with the defeat [to Sevilla] but this certainly made the group stronger.

“We started the season very well, at a high level. We all played very well, so, of course, 2016 was a good year. In the end I got injured, I missed a few games at the end of the year, but it was a positive year.”

Jürgen Klopp’s influence on the Reds’ style of play is there for all to see, and Coutinho explained that a strong focus on teamwork is always a key part of the boss’ instructions.

“The coach demands a lot from the group. We work hard as a group and of course Liverpool has great players,” he continued.

“Everyone has been playing well this season and has done what the coach has asked for. And in relation to that, the coach lets us do what we want on the field.

“Of course, everyone has their responsibility, when they do not have the ball, they should mark, be in their position, defend. But he lets us do what we want. No one feels pressure determine who will make decisions and who will defend. Everyone works together, as a group.”