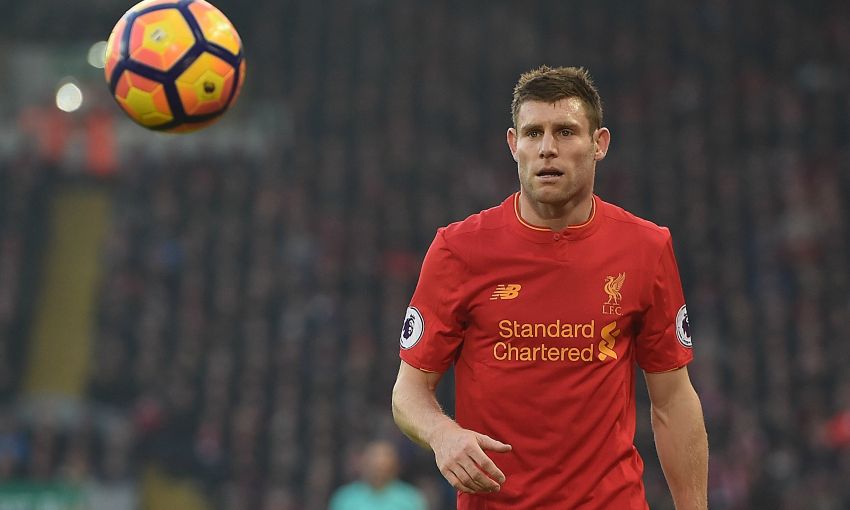 James Milner feels the manner in which Liverpool went about winning Monday’s Merseyside derby proves they have a steadfast commitment to their footballing principles.

As the clock ticked into the 94th minute at Goodison Park, Jürgen Klopp’s side were on the verge of having to settle for a frustrating 0-0 draw, having seen a dominant second-half display go unrewarded.

Sadio Mane, though, had other ideas. The Reds forward pounced to score from close range after Daniel Sturridge had hit the post following yet another patient passing move - sparking scenes of jubilant celebration among the visiting players and supporters alike.

Post-match, Klopp praised his team for the way they ‘learned from the first half’ to produce a much-improved performance after the break.

And Milner thinks Liverpool’s refusal to deviate from their style of play, even as time ebbed away, is evidence of their trust in each other and the manager’s ideas.

“The belief’s there. I’ve said it since I’ve been here - I don’t think it has been in people realising in the squad how good we are and can be, so I think that’s coming more and more this season,” the Reds’ vice-captain told Liverpoolfc.com.

“It was a different type of game, a game which was never going to be a very pretty game - they are very different to all the other games in the season.

“To be able to come out of it with a victory and also the way we kept going in the second half, [we] kept playing, kept trying to do the right things, we were on the front foot for the majority of the second half definitely - I can’t remember them being in our box too many times - and we played the game in their half really.

“To keep probing, to keep playing the way we want to play and then be rewarded with that is obviously pleasing. It shows good patience from the lads and shows we were not getting too anxious.”

Milner went on to say that the atmosphere in the away dressing room in the aftermath of the match was a mixture of relief and joy.

“Derbies are all about the victory and the three points and the bragging rights,” he added.

“You want to play well and you want to put in a performance, but ultimately that’s all that matters and that’s all that anyone cares about. The way we did it is pleasing and probably the fans enjoyed it more winning like that. But any win will do in a derby.”

Liverpool’s players and coaching staff held their Christmas party 24 hours after the win over Everton - a result that was in stark contrast to the 3-0 defeat at Watford which preceded last year’s festive get-together.

Presumably this week’s bash had a much happier vibe than the 2015 equivalent, then?

“It’s obviously always nice when you’ve had a good result and last year wasn’t great. You go and it’s team-building, you want to have a good night and have a good party together but obviously after a defeat it’s always hard get it out of your mind and it lingers for a few days, so to get a good win like that was nice and we had a good night.

“We’ve got a good, close bunch of lads here. Everyone gets on and we do plenty of things together outside and things with the kids and stuff like that as well, so we’ve got a great team spirit and that probably does contribute to being able to go late into games and go that extra yard for each other.”

During his time at Manchester City, Milner played in one of the most memorable derby matches in Premier League history when his former club beat Manchester United 6-1 at Old Trafford in October 2011.

While the 30-year-old finds it tough to call whether an injury-time winner tops a barely-believable rout in terms of enjoyment, he admitted that nothing comes close to the feeling of scoring late to claim a victory.

“It’s hard to compare the two, they’re obviously both wins which like I said before is the most important thing, and both [came] in very different ways,” the No.7 continued.

“They’re both very pleasing because in one you’ve gone away from home and won convincingly at a team who’ve been such a force in English football in recent history.

“Obviously the other night, winning in the last minute - any last-minute victory, we had a few last year as well, obviously with the Dortmund game and at Norwich - the moments after those games, you can’t really beat in football, when it’s been so close and feeling that relief of getting the victory in that dramatic fashion.”