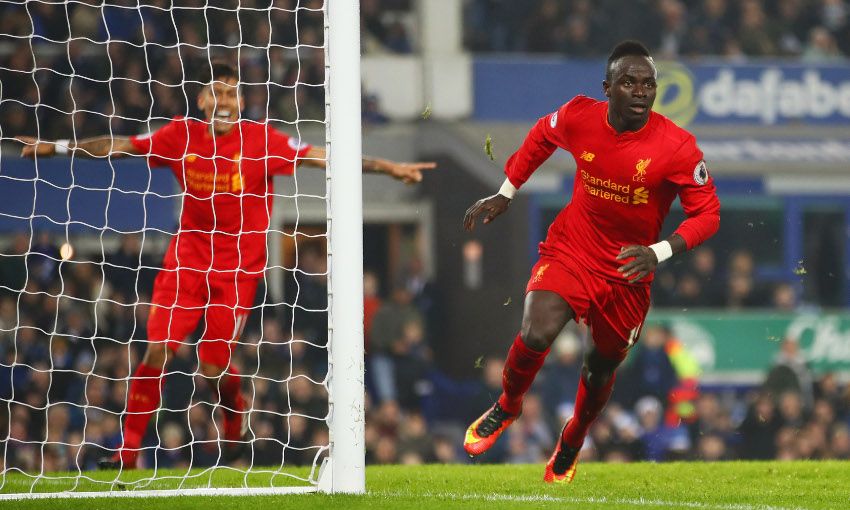 The Reds looked set to have to settle for a point in a typically high-tempo, hard-fought Merseyside derby they dominated large parts of, but Mane reacted quickest when Daniel Sturridge’s low shot hit the post and converted from close range in the 94th minute.

The goal was no more than Jürgen Klopp’s side deserved, with Roberto Firmino twice being denied after half-time before Mane’s late intervention.

A second-successive away win lifts Liverpool back up to second in the Premier League.

•    Liverpool shade a first half featuring few clear-cut chances, with Divock Origi going closest for the Reds.
•    Klopp’s team control the second period from start to finish but look set to be frustrated – until, that is, Mane strikes deep into stoppage time.
•    Sturridge and Emre Can make their comebacks from injury as late substitutes.

Klopp named an unchanged starting XI from last Wednesday’s 3-0 win at Middlesbrough, with Sturridge and Can returning to the Liverpool bench after their respective calf and knee injuries.

A frenetic start to the game saw little in the way of goalmouth action at either end, but Ragnar Klavan was alert to block Aaron Lennon’s low cross as Romelu Lukaku lurked in the 24th minute.

Georginio Wijnaldum then shot over the bar as the match settled down and Liverpool began dominating the ball.

Origi sliced Nathaniel Clyne’s cross over following a brilliant, free-flowing move from the Reds and the teams went in level at the break after Ramiro Funes Mori headed Ross Barkley’s corner wide at the other end.

Liverpool began the second period on the front foot and Firmino forced Stekelenburg into action five minutes after the restart.

The Brazilian raced onto a long ball and attempted to side-foot beyond the advancing Stekelenburg, only for the Everton goalkeeper to palm his attempt away.

A one-two between Firmino and Mane ended with the latter sliding an effort wide under pressure from Stekelenburg and Leighton Baines.

Robles then denied Firmino’s expertly-struck volley from James Milner’s corner and Klopp introduced Sturridge and Can as the Reds continued to press for a late winner that their dominance deserved.

And Sturridge made a telling contribution, as his shot from 20 yards beat Robles and rebounded off the post straight into the path of the onrushing Mane, who finished with ease.