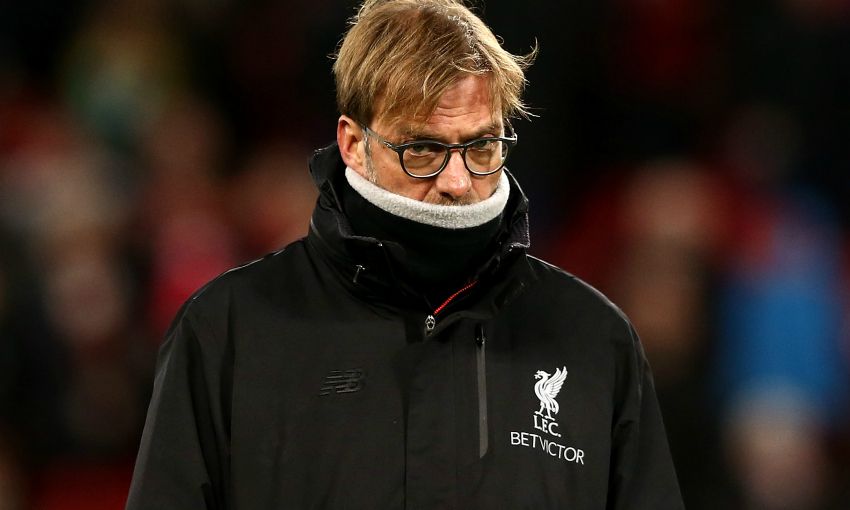 Jürgen Klopp admitted to feeling disappointed after Liverpool's 2-2 draw with West Ham United, but the boss praised his side for fighting back from 2-1 down to claim a point.

Adam Lallana's early goal put the Reds ahead at Anfield this afternoon, but strikes from Dimitri Payet and Michail Antonio ensured the Hammers were 2-1 to the good at half-time.

Klopp's team equalised almost immediately after the restart through Divock Origi's fourth goal in his last four appearances, but they were unable to force a winner, despite putting the visitors under plenty of pressure in the second period.

The manager was asked for his assessment of the draw in his post-match press conference, while he also provided an update on the fitness of Dejan Lovren, who was substituted at half-time.

Read on for a full transcript...

On he whether he sees the draw as a negative result…

Yes it’s a negative thing that we didn’t win, but it’s still a point so it’s kind of mixed emotions. Being one goal down in a game against West Ham with their style of play, with their situation in the table plus the quality they have usually - it is really difficult to play against them. First half, we started brilliantly in the game … they wanted to defend, we had to take the ball, play them around if you like and score goals. 1-0 up and all good. Then a little bit too excited I would say, we had not a real formation for protection in these moments, nearly everyone was involved in our offensive situations, we had exactly two centre-halves and sometimes Hendo behind the ball, all the rest were on the other side so it was a little bit a problem with second balls after, but not too often actually.

The goals were not in situations like this, but we gave a little bit away in these moments, we were not completely in control how we could have been I would say. West Ham then played football, what they’re able to do of course. Then free-kick and the deflected situation with Joel Matip - who made a fantastic game tonight - slipped a little bit, couldn’t control this ball and Loris was then obviously surprised and was a bit late and they could score. [It was a] Difficult challenge then. At half-time we told the boys to cool down, ignore the result, in this game we are able to score one, two or three goals if we go back to our usual idea. The boys did well in the second half, it felt a few times that we had the whole 48 minutes in their box. It wasn’t like this, but it felt like this. That’s really difficult then because the whole of West Ham was waiting for us there so you need a little bit of luck to come through.

We scored the equaliser, more than deserved. It was pretty early but over the 93 minutes it was more than deserved. We tried everything but of course you can say in this situation we could have done better, that’s for sure the case but first of all you need to find solutions. We did it well, we crossed maybe a little bit too often but only because of our occupation of the box…sometimes Divock made a cross and then we have in the box a few players against - Reid and so on, it’s not too easy. It’s not too simple, second balls were there, a fantastic finish from Hendo but a great save. So that’s the whole story of the game and in the end it was a draw. It’s still a point, maybe I need a night to feel a little bit better, but that’s no problem. That’s my job - now we have to carry on, no problem.

On Payet’s equaliser from a free-kick…

Things like this happen and with all goals, we can always do it like surgery and pick at this and that – and I completely accept this, but goals like this happen. First of all, you have to shoot like this, you have to find the guy who doesn’t jump and whatever; it was a brilliant situation from Payet. I saw him training before the game and he missed all [shots] and I was hoping [he would] in the game too!

On Liverpool’s position in the Premier League table…

It’s difficult to stay in the race with Chelsea when they win everything, which we obviously haven’t! When we were first or second I didn’t think about it, which is what I said. I am pretty sure I said this is the moment to collect points as much as possible. The season is very long, as everyone knows, and the most intense time is coming now. Chelsea until now could play nearly the whole time with exactly the same team, Arsenal nearly the same, United had a few problems probably I am not sure, and Tottenham lost Kane. That’s how it is. We are a real skilled team and our expectation is that we are in the top region of the table - that’s where we want to be in the decisive part of the season and then we can talk about what’s possible. In this moment, six points [behind] it’s not what we wish but we cannot change it, the only thing we can do is do what we can do best.

When I saw today a few moments of how we are able to play, it was fantastic even with a few [players] injured. All of our offensive options [on the bench] were very young and we have absolutely no doubt about their quality, but a game against West Ham with only guys like this [on the bench] was maybe not the best moment. We will need them in the next few games. It is all good in the moment apart from the results in the last two games, but in both – in big part of the games – we were the much better team. That’s an important thing. I have to say, today they [the fans] were outstanding. We only did what we had to do, playing football with big passion, but the crowd was great over the whole 90 minutes. We are still on a very good way, we are not first in the table, we are third – but a lot of teams should feel worse and everything is good in the moment.

He said he had a cramp and in the ear of the medical department, it was a hamstring issue. It was in the region. Dejan wanted to carry on but we cannot take a risk in this situation. Hopefully we took him [off] early enough.