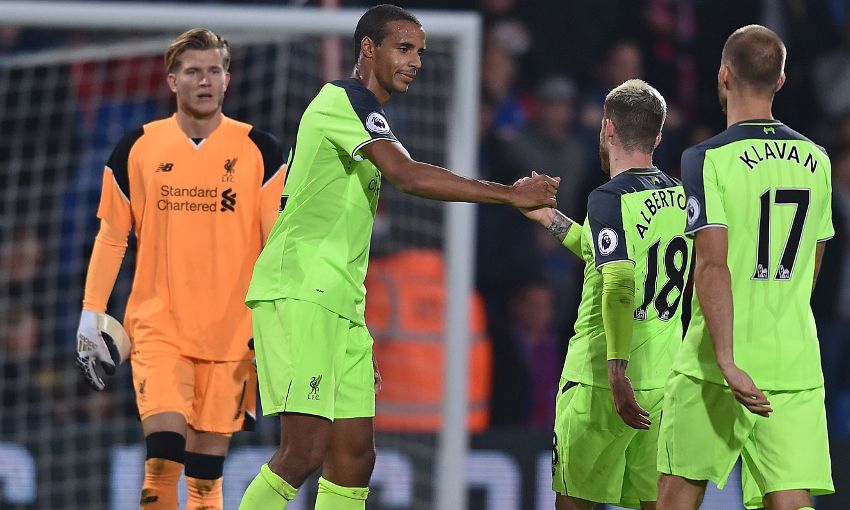 By registering his first goal for the club with an unstoppable header at Crystal Palace, Joel Matip demonstrated exactly why he can be a vital figure at both ends of the field, according to David Fairclough.

In the closing moments of an eventful first half at Selhurst Park on Saturday, the centre-back expertly nodded in Philippe Coutinho’s corner to put the Reds 3-2 up.

The fine finish came as part of another assured display at the back from the No.32 and his popularity continues to grow with supporters.

Former Liverpool forward Fairclough is also a big fan of his qualities, believing Matip to be an inspired signing by Jürgen Klopp.

“I think Matip has really come on and he has gradually become a firm favourite amongst the Liverpool supporters,” he told Liverpoolfc.com.

“It was great to see him get his first goal for the club and it was an unstoppable header. You get the impression with his presence he is capable of getting more goals for us like that.

“Everybody who watches Liverpool can’t help but notice how calm Matip is. He is a big, imposing figure who has added height and strength to the side.

“He handles himself extremely well and he doesn’t get ruffled. He is getting stronger and stronger.”

Saturday’s win at Palace saw Klopp’s charges extend their unbeaten Premier League run to eight games to remain level on points with Manchester City and Arsenal at the summit.

Once again, Brazilian duo Coutinho and Roberto Firmino were the chief tormentors as the Eagles backline struggled to cope with the Reds’ dynamic attack, and Fairclough feels another statement of intent was issued.

He said: “We all expected an exciting game but for some people there was a touch of trepidation about going to Crystal Palace, but with the form Liverpool have been in during recent weeks I always felt we would get a performance.

“The football Liverpool played in the first half was sensational and Philippe Coutinho was fantastic.

“He started well and maintained that. He’s a great player and we are seeing the best of Coutinho this season with his goals and the assists he makes.

“Firmino scored another superb goal and once you get a little taste of scoring, it’s something you want to continue, so you sense we are in for a really good season with the likes of Firmino, Coutinho and Sadio Mane all contributing.

“Don’t forget, Adam Lallana has scored a few goals this season as well, so with the forward players we have available, including Daniel Sturridge and Divock Origi, it’s a very exciting prospect.”

Next up for Liverpool is the vist of Watford to Anfield on Sunday in the final game before the international break.

Walter Mazzarri’s side are seventh in the Premier League table and have kept three successive clean sheets in the top flight, but Fairclough believes the Hornets won’t be relishing a visit to L4.

He added: “They are one of the few teams to play three at the back, which presents a different proposition, but it shouldn’t be that great a problem for us if we play our game.

“Liverpool have faced awkward situations this season as most teams have tried to play defensively at Anfield, so we are used to crowded situations on the field.

“Watford are a big and strong team and obviously they have the threat of Troy Deeney and Odion Ighalo up front, but Anfield is a very difficult place to visit these days and it is going to be a tough game for Watford.”