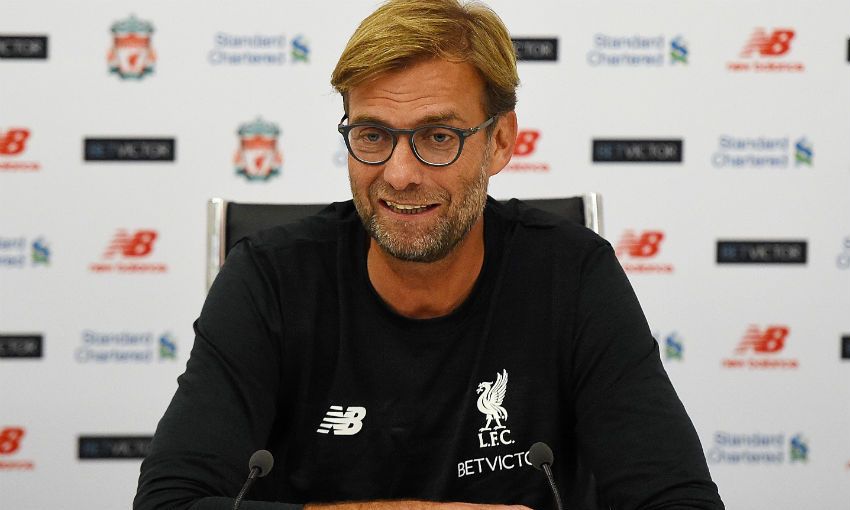 Jürgen Klopp wants his Liverpool team to take inspiration from their most recent experience of facing Manchester United at Anfield tomorrow night, with the boss promising: ‘We’ll be ready.’

The Reds last hosted United in last season’s Europa League round-of-16 tie, when a penalty from Daniel Sturridge and Roberto Firmino’s close-range finish at the Kop end gave them a 2-0 lead to take into the second leg at Old Trafford.

Liverpool were good value for their two-goal cushion, and subsequently finished the job a week later by claiming a 1-1 draw in Manchester.

A dominant performance in front of a fervent Anfield crowd is something Klopp would dearly love to see repeated on Monday evening, and the manager believes his players are fully prepared for one of world football’s biggest fixtures.

On his team talk prior to March’s European meeting in L4, Klopp said: “I don’t write down what I say before games, but maybe I could use it again for the next Man United game.

“We have a lot of things to do until the game, but we’ll be ready, that’s the only thing I can promise. We’ll try everything, I am really looking forward to it.

“I am quite optimistic because we have a wonderful opportunity to play a home game under the floodlights.

“It will be a fantastic atmosphere and trying your best in a situation like this is the best thing I can imagine when I think of football.”

Games between Liverpool and United are usually tight and always hard-fought, but while voicing his respect for the qualities of the opposition and their manager Jose Mourinho, Klopp is focused only on ensuring his team are at their best.

“We don’t think about United too much,” the boss added.

“We know about their strengths and where they are individually strong, experienced and all that stuff. They are a good side, but if they are not concentrating for a second, then we can use the situation.

“There’s not a big difference between the teams. Nobody can be thinking this will be a clear result with a game decided early on.”

On Mourinho, who Klopp faced during their tenures at Borussia Dortmund and Real Madrid respectively, the manager added: “He is a very, very successful and very experienced colleague. We had a few talks before the games, especially against Real Madrid.

“It was always difficult, because he always has good teams behind him I would say. [It’s] always a big challenge and that’s how it is this time.

“I’ve said before it’s not Mourinho against Klopp - that would make the game much easier.

“This is Liverpool against United, two good sides. We are in the race for three points and that’s the only thing I need.”