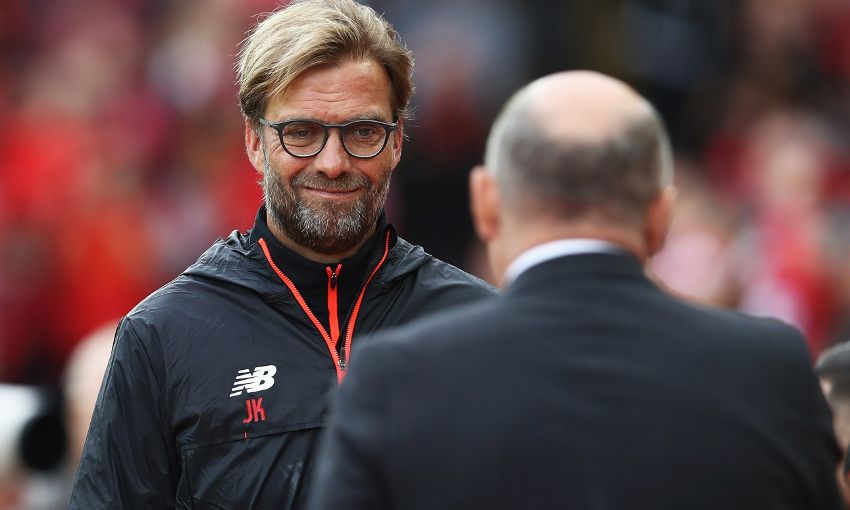 Jürgen Klopp was delighted with Liverpool's first-half performance in the 5-1 win over Hull City – but admitted his side could have played better in the second period.

The Reds were 3-0 up at the break in the Premier League clash at Anfield, courtesy of strikes by Adam Lallana, James Milner – from the penalty spot – and Sadio Mane.

Hull were reduced to 10 men with the award of the spot-kick, as Ahmed Elmohamady was dismissed, but struck back through David Meyler six minutes after the interval.

However, Philippe Coutinho whipped another sublime long-ranger past the goalkeeper within seconds and another Milner penalty capped off the win.

Klopp was especially satisfied with the level of Liverpool’s counter-pressing as they claimed a fourth consecutive victory, though felt more could have been shown as time ticked away.

Read on for a summary of the manager’s post-match press conference, in which he also discussed Coutinho’s strike, the form of Milner and more.

On his team’s performance…

All good. Actually, the first half was brilliant. That was how football should be if you are able to do it. You have to show this. In the first few minutes you could really see how strong Hull could be in counter-attacks – really good, really strong and difficult to defend. We showed it in analysis but I saw there was a little bit of a surprise about the speed and power of Hull in these situations. Nothing happened and then we played football. We were really strong in possession today. But the most impressive thing today was the counter-pressing in the game, with this big number of possession. I think it was the best game in counter-pressing that we have played until now. That was very important, because we scored the goals right and all that stuff, but winning the ball back in these moments is so important and it becomes really difficult for the opponent to increase confidence.

So I was really pleased with the performance in the first half. The second half was not [as] exciting, but still good, maybe not at 100 per cent concentration. I could say now ‘we have to do this’, that’s right. But it’s a kind of respect – I don’t say we have to score more goals in a game like this. It’s respect for Hull. They did a really good job today, not in the situations where they conceded goals but around [that]. They stood in the game, they were not over-aggressive or something, didn’t try to kick us out of the game. The coaching staff and manager on the sideline tried to find solutions and in the second half they had a solution, even with 10 men. I appreciate this really. A good game from my side, but for both teams [it is] only one game and one result.

On a special goal by Coutinho…

I saw a lot of them when I was still in Germany, to be honest. I think he always scores goals like this! I would like to take the credit for his shooting ability, but I’m not responsible for this. It’s very good. All his goals he scored were because we created the spaces, not to force [him] to shoot like this. In this moment it was the perfect finish, the absolutely perfect finish for the situation. We played with all offensive players, today something like eight. We played freely and patient football – a lot of movements, a lot of good passing patterns which I saw. I was really pleased with all this.

On Milner’s contribution from left-back…

We can now talk about Millie if you want because he was not a left full-back last season. Or we could say the same about Clyney – did anybody see Clyney that often in and around the opponents’ box? It’s a very important position for us, a very, very important position for us. To be honest, one of the best players in training in the last few weeks has been Alberto Moreno. He took the situation brilliantly and is in a really good moment. I don’t want to have too much pressure because I want the players all confident, but that’s the kind of pressure we need to make on all positions. In each training [session], we have to perform. If not, not because of me, only because there’s another one who can perform, then we have to change – that’s how it is and it helps all of us. Milner played really well, that’s true.

On there being more room for improvement…

I don’t know how many times in my life, and I’ve had four or five hundred games as a manager, that I’ve won 5-1 in this kind of [way]. It’s all good and I don’t want to criticise but I think we could have done better in the second half, honestly. It was good, even in the second half, but not as good as it could have been. I am really happy – really happy. I’m quite a thankful person usually, so I am really thankful for the first half! In the second half, a little bit better would have been nice. We have a lot of things to improve and one of the things is if you are brilliant, you need to be brilliant for 95 minutes. We were brilliant first half and second half we were still good, but not brilliant anymore. It’s all good and only my problem.