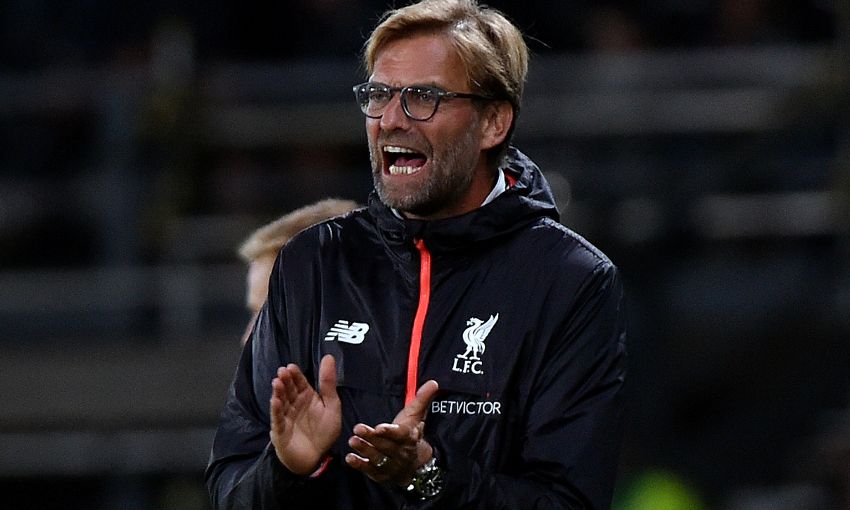 Jürgen Klopp was delighted to see the players who came in for Tuesday night's EFL Cup win at Derby County make the most of their 'deserved' minutes.

The manager opted for seven changes to his starting line-up at the iPro Stadium, including full competitive debuts for Marko Grujic and Loris Karius.

Ovie Ejaria also made his senior bow from the bench, Danny Ings was introduced for a first appearance of the season and Emre Can clocked up game time after injury.

There was no dip in Liverpool’s quality, though, and they followed up Premier League victories over Leicester City and Chelsea by eliminating the Rams with a 3-0 result.

Asked to assess the efforts of those who came in, Klopp told Liverpoolfc.com: “For Divock [Origi], the goal was good. You see [there’s] a little bit of a lack of rhythm.

“[We have seen] better from him. But he is still such a young boy and we will keep on working with him and everything will be good in the future, 100 per cent.

“Alberto Moreno had a brilliant game, very calm – that’s how he trained in the last few weeks since he didn’t play. He was really cool, concentrated and disciplined in training sessions and that’s how he played, really good.

“Ovie had his debut too – well deserved. Ingsy came in, that’s nice. They all deserved these minutes. It was a good evening and a good game for us. I don’t think anybody is injured.”

Can featured for the first time since the previous round of the EFL Cup, when he picked up an ankle problem in the 5-0 win at Burton Albion last month.

The Germany international requires more time to develop his rhythm according to Klopp, but the boss happily welcomed the additional strength in depth.

He said: “Fitness is not a problem. Emre is a player who has a strong, strong mentality and he can fight. But you saw again it’s about rhythm.

“You cannot go into a shop and buy rhythm. You need to work for it and that’s what we are doing. I’m not rushing it.

“Emre is cool enough and experienced enough. We can use him, that’s good. He is back, that’s very good. But, of course, I don’t know who will play at the weekend and what will happen [before] the weekend.

“The most important [thing] is that the more players I have and the more difficult the choices for me, the better it is for LFC.”