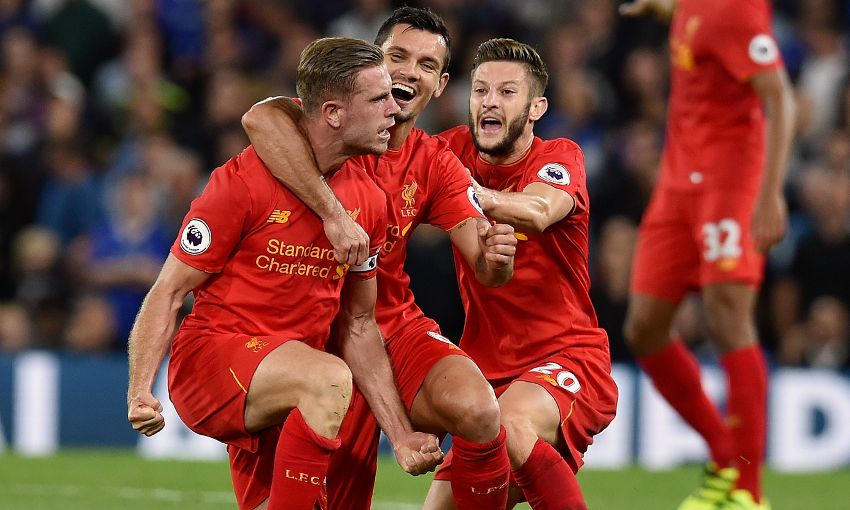 Having stylishly beaten reigning champions Leicester City at Anfield six days ago, the Reds followed up with an another enterprising display to claim a third Premier League win of the season.

Lovren opened the scoring from Philippe Coutinho’s assist and Henderson increased the advantage with a sensational curler into the roof of the net from 25 yards.

The Blues responded strongly in the second half and halved the deficit through Diego Costa, but Jürgen Klopp’s team were not to be denied and they repeated their triumph on this ground last term.

Two changes on the teamsheet

The manager’s teamsheet showed two changes from last weekend’s home win over Leicester, with Coutinho replacing Roberto Firmino – ruled out due to a minor groin strain – and Lovren back in for Lucas Leiva in central defence.

Liverpool’s first sight of goal was forged inside two minutes and it was from the left foot of former Chelsea man Daniel Sturridge, who skipped in from the right to the edge of the area and hit a shot which Thibaut Courtois handled low down.

Klopp’s side had settled into the challenge quickly, taking control of possession and pushing the hosts back into their own half with an air of confidence. The away support roared in approval.

And the noise from the visiting section grew significantly in the 17th minute.

Coutinho was allowed too much time and space on the left flank to whip a cross to the back post that was begging to be finished – and Lovren accepted the invitation gleefully with a calm strike across Courtois.

Chelsea were rattled by the setback as much as the Reds were buoyed by it, with the pattern of the game showing little sign of changing immediately after the goal.

In fact, Sturridge was not far away from doubling the lead when a quick throw released the No.15 with plenty of space, but his eventual thump whistled beyond the far post.

Instead it was the captain who produced a second for his team nine minutes before the break with as perfect a shot from distance as you will ever see. 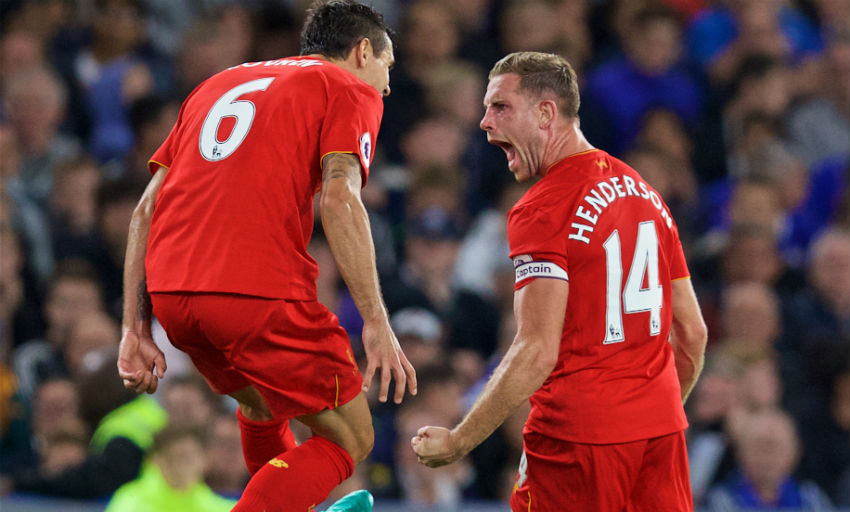 Liverpool had appeared to be blocked in from a throw-in deep on the left and the ball was somewhat squandered, at least until it bounced out to Henderson and the midfielder instantly sent a stunning dipper of a shot that sailed into the air and back down underneath the bar.

Klopp’s men therefore returned to the dressing room for half-time in almost complete command of the clash.

But the Chelsea side that came back out after the interval was a much different obstacle to contend with and began to seriously test the visiting defence for the first time.

Only diligent tracking by Sadio Mane into his own area prevented Eden Hazard from a free shot on goal before the home crowd appealed vociferously for a penalty as Branislav Ivanovic tumbled under pressure from James Milner.

Divock Origi came on for Sturridge shortly before the hour mark and within moments Antonio Conte’s charges found the goal they craved.

A supporting run forward from Nemanja Matic saw the midfielder played in on the left byline and he picked out Costa in the middle of the area for a straightforward conversion despite Milner’s late attempt to clear off the line.

To their credit, Liverpool found a way to re-establish a foothold in the match and as the clock ticked into its final 10 minutes, it was the team in red holding onto the ball.

Origi might have finished the contest too when a Milner cross from the left flank took a deflection and looped to the Belgian at the back post – but Courtois reacted quickly to thwart his compatriot’s downward header.

Thankfully a third was not needed and the Reds preserved their lead to secure a second successive league victory at Stamford Bridge under Klopp and move onto 10 points in the table.