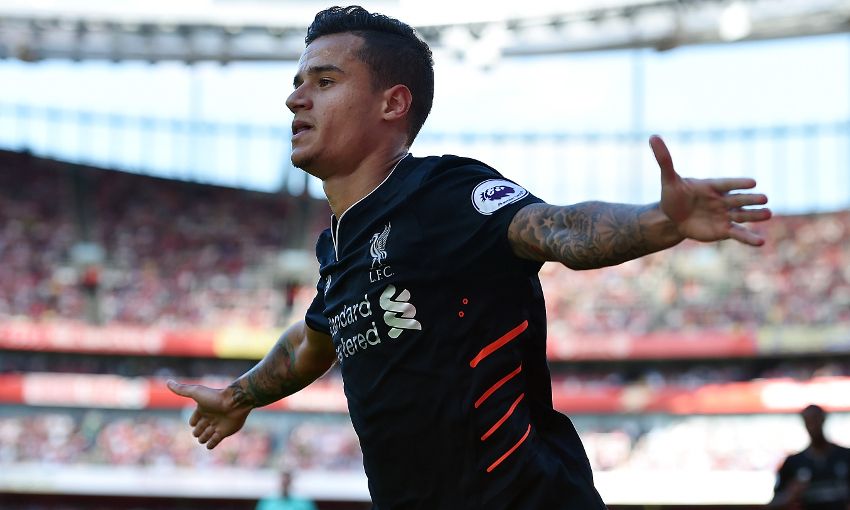 Philippe Coutinho admits his first goal in the 4-3 win at Arsenal on Sunday was the finest free-kick he has ever scored.

The Brazilian levelled the score at 1-1 at Emirates Stadium in the final seconds before half-time, swiping an unstoppable, curling effort into the top left corner.

It was a strike of breath-taking skill and it helped to turn the game in Liverpool’s favour after Theo Walcott – who had already seen a penalty saved by Simon Mignolet – put the Gunners ahead.

When the teams returned from the interval, Adam Lallana edged the Reds in front, Coutinho converted Nathaniel Clyne’s cross for a third and Sadio Mane blasted home at the end of a solo run through the Arsenal defence.

The hosts set up a tense finale by responding with goals from Alex Oxlade-Chamberlain and Calum Chambers, but Jürgen Klopp’s men secured the win.

“[It gives us] confidence, not only for me but the whole team,” Coutinho told Sky Sports.

“We played a difficult game and played really well. Now we have to focus on the next game, step by step and keep going.

“In the first 20 minutes we didn’t play very well, in the way the manager wanted. Then we showed we are fit, we were training hard in pre-season. We had a good second half.”

And on that sublime set-piece, the No.10 said: “I think it was my best one. I keep trying.

“It was a good game, a tough game and we are happy because we won. Now we have to focus on the next game.”

Want to watch Coutinho and co in style at Anfield this season? Click here to check out our range of hospitality packages.