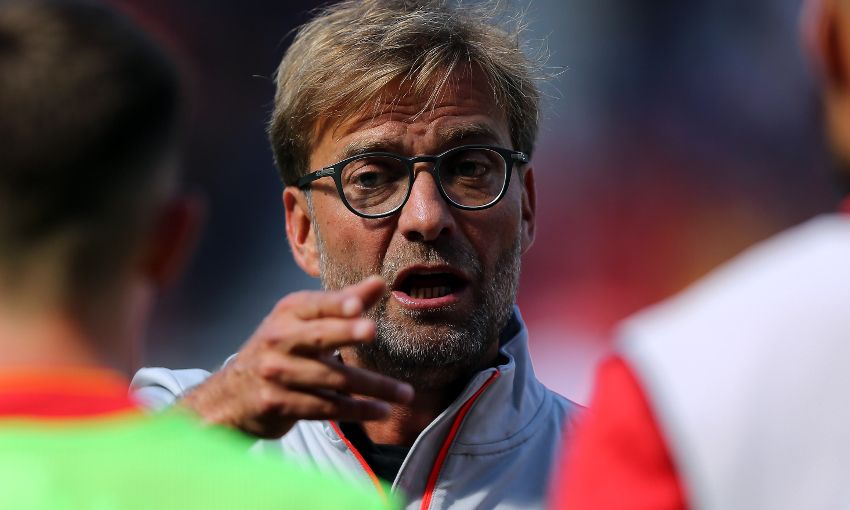 A who's who of managerial talent will stand on the Premier League's touchlines this season but Jürgen Klopp insists results can only be decided by the performances of their teams.

The Liverpool boss is set to face some of the finest coaches in world football, with Antonio Conte, Pep Guardiola and Jose Mourinho notably adding to the competition after their appointments at Chelsea, Manchester City and Manchester United respectively.

Klopp kicks off his first full campaign in the English top flight by going head-to-head with Arsene Wenger as the Reds face Arsenal at Emirates Stadium on Sunday.

As he previewed that game at his pre-match press conference, the German explained why the focus should ultimately be on the pitches rather than the dugouts.

“The best thing is we [the managers] don’t play!” said Klopp.

“It’s exciting for everybody having these big names in the league, that’s clear. But in the end, if they all have only one target, one aim – winning the league – then there can be only one really lucky.

“We can think about the answer now. What does that mean for all the others? They failed? Or they still did a good job? Or they did their best? I have no idea what it means. So we have to wait.

“In this moment, it’s England and in England managers have, in public, a more special role than maybe in other countries.

“We will all have problems in the season and difficult moments in the season. Then it’s all about finding solutions again. In that part, it’s always the same job, only the problems are different.

“We have to be ready for solutions and that’s what we tried to prepare for in this pre-season.”

Liverpool played nine times during their pre-season preparations, including fixtures against a variety of opponents on home soil, in America, at Wembley and in Germany.

And Klopp has been pleased enough with the work done in the summer to admit there can be no excuses for his team as the campaign gets underway with ‘everything possible’.

He continued: “Until now, it was really OK. We had wonderful games and wonderful moments, wonderful signs of the team.

“And also a little bit less wonderful signs, of course, especially the last game. But the last game is the most easy to explain.

“Now we have to make sure that we have the right answers for the first game, and not think about all the rest.

“I have already said we want to fight for everything. That’s what I mean when I say we are not watching out for excuses before we start. Maybe in the season we have to excuse one or the other thing and say ‘this time it was not possible because of…’ but not from this point of view.

“At this moment, everything is possible – so we should try everything.”