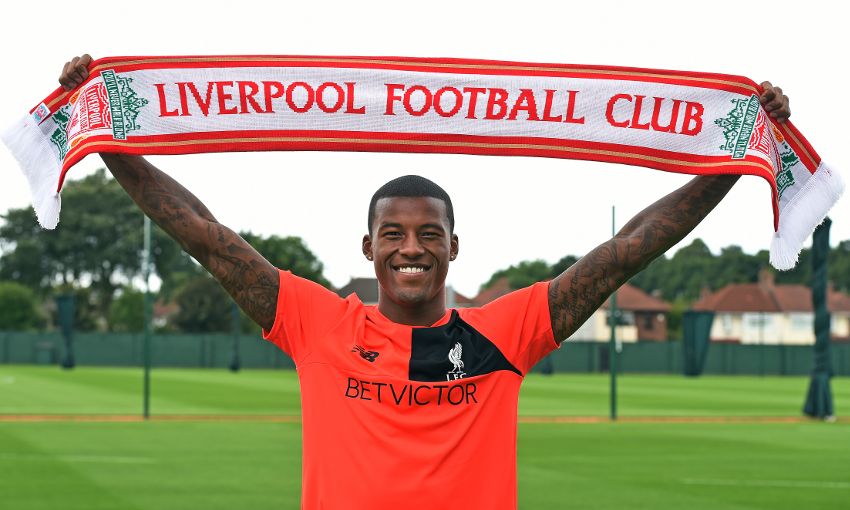 Read or watch Georginio Wijnaldum's first interview as a Liverpool player after the Dutchman today completed his move to Anfield from Newcastle United.

Wijnaldum opened up on his excitement at playing for the Reds and working under Jürgen Klopp, before also revealing why he opted to take the No.5 shirt last worn by Daniel Agger.

You can watch the midfielder's first interview on demand now on LFCTV GO by pressing play on the video below. Need a subscription? Sign up here.

Gini Wijnaldum, welcome to Liverpool Football Club, how excited are you about the move here?

Really excited because Liverpool is a big club with a great history and it’s always a dream to play for as big a club as Liverpool.

Sometimes players speak to other players, coaches, before a big move – have you spoke to anyone about coming to this club and what Liverpool is all about?

Not really but I spoke with friends and they told me it’s a big team. I know Jonjo [Shelvey] very well because he’s my old teammate and he also told me how big the club is.

What did he tell you about - the atmosphere, the history of the stadium?

I already saw it when we played here with Newcastle, I saw the supporters and how they sing and support the team. But he told me that I would love the city and also [that] the people who work in the club are good people. He said, ‘you will enjoy it’.

You have had a taste of English football already, do you feel you’ll benefit from having a season at Newcastle and be ready to hit the ground running here?

I must say that the people around me make it easy for me because the only thing I have to think about is football because all the other things are taken care of. I think the people with me at Newcastle helped me to focus only on football and that’s what I did. I tried to enjoy every game that I played and [in] most games it worked. When you are in a [relegation] situation, sometimes it’s difficult to enjoy the football, but I think I did well for my first season in the Premier League.

Eleven goals last season, you were very successful at St James’ Park in particular. What made you perform so well at home?

I don’t know why! As a team we did well in home games and away games we were not so good. I think that was the main reason we were relegated. To be fair, for me, it doesn’t matter where I score. If you’re a midfielder and you score, you must be thankful and happy because a lot of midfielders don’t score goals. It doesn’t matter where I score, I want to score everywhere, but if you can make 11 goals, every midfielder dreams about that – especially in my first season [in the Premier League]. No matter where you score, you have to score and win the games for your team.

You say you’re a midfielder, but whereabouts in midfield do you like to play? Sometimes it may be hard to pin down your position.

It doesn’t matter, really, but I think as an attacking midfielder I’m best because I’m fast, I can make goals from behind the defence. Because I can score goals, I think that’s my best position, but I can also play other positions and that’s what I did last year.

At Liverpool, there are a lot of big players who play behind the strikers: Philippe Coutinho, Roberto Firmino, Adam Lallana. Are you excited by the prospect of playing with them?

Of course. As a football player, you are always excited if you can play with good players, good footballers. They are good footballers and you want to prove that you can work together with them. I look forward to that.

You play in midfield so why the No.5?

On my debut at Feyenoord nine years ago, I had No.5. I started with [that number] because all the other numbers were already taken. It went well for a few games but when I went to PSV I had No.10 because they held the No.10 for me. And when I went to England with Newcastle they gave me a choice of a few numbers and the No.5 was free, so I thought I began with that number and it’s a new start in a new country – I will play as a No.5 again and see how it works. It’s quite a lucky number for me, I feel good with a No.5 and when I came to Liverpool it was also free so I took it.

You started with Feyenoord at 16, what was that like? Was it good for you to play so early?

It was really good. It went fast for me because I was already playing with lads who were two years older. They let me make my debut at the age of 16 and at that time I was only enjoying it because I was thankful that I could make my debut at that age – not a lot of players have that. A lot of players play at a later age and I was lucky I could do it. If I look at my career from 16 to now I have a lot of ups but also a few downs and that makes me stronger as a person.

You’ve crammed a lot in, moving clubs a couple of times, being crowned Dutch Footballer of the Year and moving to England. Do you feel now that you’re well-placed for the second part of your career with all the experience?

Yes. [Experience] makes you stronger and especially in situations where it’s not going so well. I learned a lot from last season – it didn’t go so well but I learnt how to fight more. Unfortunately it was not enough because we got relegated but it made me stronger, so it was a good season for me. It was a new country, new club, with players who only speak English, so I had to learn a lot in one year.

We haven’t had a lot of Dutch players at Anfield but Dirk Kuyt was here. Do you have memories of seeing him play in a Liverpool shirt?

Yes, he did it really well. He played for Feyenoord before and went to Liverpool. Ryan Babel was also at Liverpool. Dirk had the best moments here.

He was a really popular player with supporters, is that the kind of rapport you’re hoping to build up with fans?

He deserved it at that time because he worked – he always works hard. It doesn’t matter where you put him on the field, he works hard. Supporters appreciate it when you’re trying to work hard for the team and that’s what I have to do also.

You’ve seen Liverpool from afar so what do you think this group can do? What do you hope to achieve?

Everything is possible. You look at Leicester last season, they were champions. They put the marker down for a lot of teams and we have to try that also. Liverpool is a club with a great history but you want to get more history, create history, and be part of that. That’s what I want, I came here to win something, and I’m going to do everything to make it happen.

What have you made of Jürgen Klopp?

A great man, from the outside, because I don’t know how he works yet and I have to work with him. I always love to watch him, his passion as a trainer, I like how he enjoys the game. He gives something back to the group [with his passion] so I look forward to working with him. I met him one time, we had a conversation and it was a good conversation because after I wanted to sign for Liverpool. He convinced me to come to the club.

He’s a passionate, infectious sort of character, is that how you find him?

That’s why I liked the conversation we had and after I just wanted to sign for Liverpool. I told my family it was a good conversation and that he’s a coach who can make me better than I am right now.