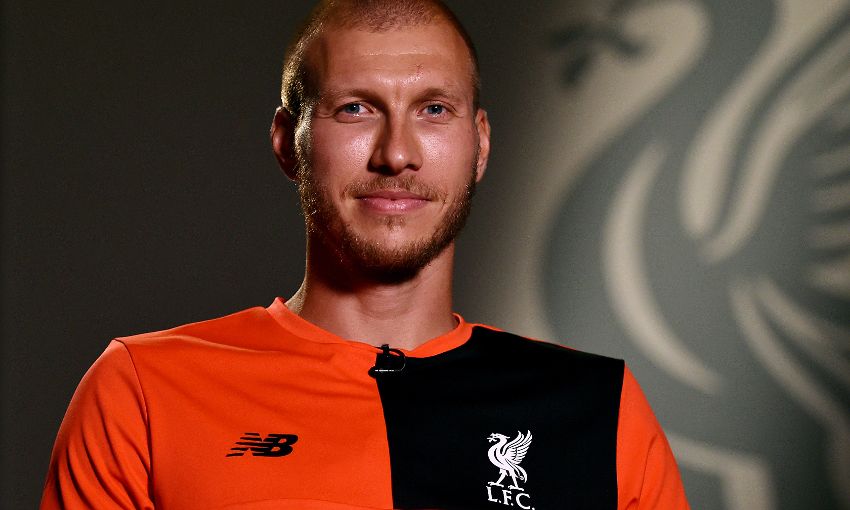 Klopp: Klavan was the one I wanted for this position

Liverpool completed the signing of Ragnar Klavan from Augsburg on Wednesday, and the Estonia international's first interview as a Red is now available to watch or read in full.

Klavan discussed the realisation of his Premier League dream, the prospect of playing in front of the passionate Anfield crowd on a regular basis, and his excitement over working with Jürgen Klopp during a sit-down with Liverpoolfc.com.

You can watch the defender's first interview on demand now on LFCTV GO by pressing play on the video below. Need a subscription? Sign up here.

Tell us why playing in the Premier League has always been a dream of yours?

Because of our national team’s former goalkeeper, Mart Poom. He was the first one [Estonian] ever to play in the Premier League and he was a big idol for me when I was growing up. I followed him wherever he went, so that’s one of the reasons, but the Premier League is the most attractive league in the world and you always have amazing players here. This is the home of football.

Did you get chance to speak to Mart about what it was like to play in the Premier League?

Yeah, of course I didn’t play for too long with him in the national team, but he said: ‘It’s crazy! This country loves football, it’s all about football.’ So that was the main thing he said, that when you play here they do everything for you so you can only focus on football and as a professional player, that’s what you need.

I mean the history…how many trophies they’ve won. Then what kind of names have been here in Melwood and at Anfield Road – that I can be a part of this club…I can’t describe it, it’s something special. I’m privileged to be here.

You played here last season in the Europa League. What was it like playing at Anfield as an opposition player?

In the beginning of the game you were more focusing on the atmosphere and what is going on because it’s a really good stadium and the fans are amazing. At that time we also had a lot of fans from Augsburg here and those things combined made it a really good atmosphere.

You’ve played in some big grounds, against Munich, and in international games. How did Anfield compare to the great stadiums of world football?

I think it’s more the feeling you get when you walk on the pitch…it’s a compact stadium, but there’s so much history in there, this is what excites me more. These days a lot of teams have really new stadiums which look good and everything is clean, but Anfield…it’s not the newest, but it’s the place to be.

How much of a factor was the manager in you coming here?

He knew me when I played in the Bundesliga from when he was still there and when I heard about this chance to have multiple good things together, to represent Liverpool and work with Jürgen Klopp, I didn’t doubt in my mind that something really, really good would come out of it.”

What was a Jürgen Klopp team like to play against?

Really difficult because Jürgen likes to play fast football and also really high pressing when they lose the ball – it was really difficult! You never got a break from the Dortmund strikers.

Talking of people you probably know a bit about, Joel Matip has arrived this summer. What do you know about him? I guess you’ll have played against him when he was at Schalke?

He’s a good, young defender. In Schalke he was a really important player for them and now that he’s here, I’m really happy.

What do you make for the competition for places? There’s plenty of it in the centre of defence with yourself and Joel, and Dejan Lovren and Mamadou Sakho as well.

For me the most important thing is the team effort. Whatever needs to be done for the team. I’ve always been a team player and this is going to be [the case] until I retire so we will see. Of course if you come to this big, amazing club there’s a lot of really good players.

Is it right to say you’re also comfortable playing as a left-back as well?

Who said that?! [Laughs] I played there when I was younger, but for the last four years or something I haven’t played there. But if it’s needed then I’ll be there.

You saw Liverpool at close quarters last season, what do you think you can achieve as a group going into this season?

It’s difficult to say, I only know the team on paper and what happened last season. For me also with my former clubs I’d always see what kind of feeling you have in pre-season. If there are really good players in the team, you also have to have the ‘click’ so everyone is working together. I’ve not trained [with the team] yet, so it’s hard to see, but I mean in the Premier League there are many, many good teams and that is what makes the Premier League so interesting for everybody.

There are some great strikers you could potentially come up against this year. Anyone in particular [you’re looking forward to playing against]?

Erm… not at the moment!

Finally, you’ve come at a good time because the squad are off to America. You talked about clicking and becoming part of the team, so two weeks away is a great chance to get to know the players when you’re all together?

Yeah of course, you’re always together 24/7 in training camps for such a long period of time and I think it makes it easier to come into the team as you can talk with different people – the staff, the players – and that’s how it starts.