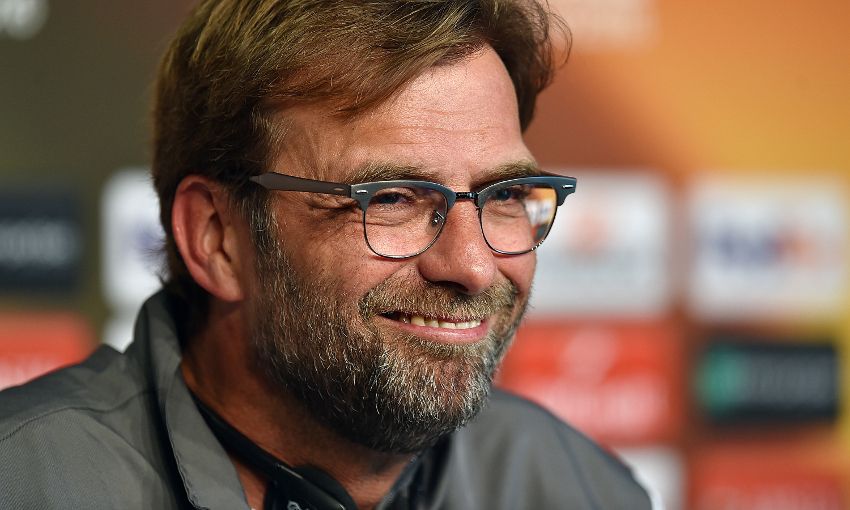 In the second part of our exclusive interview with Jürgen Klopp ahead of the Europa League final, the manager explains why victory over Sevilla would be such a fitting sign-off for the season.

At the end of a gruelling campaign filled with incident, Liverpool meet the La Liga side and reigning title-holders in Basel tonight aiming to secure silverware for the first time since 2012.

Klopp may have only been on Merseyside for seven months but the German knows ‘100 per cent’ what it would mean to return from Switzerland with the trophy on Thursday.

You felt there was a lack of patience last week against Chelsea. Is that going to be crucial tonight, because it’s important to remember that the game is 90 minutes and you don’t win it in the first 10?

The perfect performance is a mixture of all, a mixture of being lively and patient in the right moment. And defending together, that’s the most important thing, which we didn’t do against Chelsea because timing wasn’t good. I said after the game immediately that it could be the most important game of the season, especially for the Europa League season, because we can really use this game. We don’t have to show it again, everybody felt it on the pitch. We made mistakes we usually don’t make. That’s quite important. If you are in theatre, if you are an actor, and the last rehearsal is not too good, that’s quite good for the real moment.

That’s how it was for us in the game against Chelsea – it was really not our best performance. So we don’t feel too secure about our qualities, because we were in a really good moment and we are in a really good moment. Especially in the first 15 minutes of that game you saw we were so strong, so clear, good football, perfect defending, counter-pressing and all this stuff against a really strong Chelsea side as everybody saw after 15 minutes. That was quite good but it looked too easy and the final will not be easy, so it’s important that we had these problems and now we know that’s not the way we want to play. We can go back to the usual way and try our best.

Can you also use a game from back in February? Can you draw anything from the previous final you were in this season and the disappointment in losing against Manchester City at Wembley?

I don’t think I will use it, to be honest. The only thing that we could use is that we played against a strong side and were a competitor. That’s the truth. We lost in a penalty shootout – what does it mean? Nothing. Everybody says you need a little bit of luck in a penalty shootout and for sure we had no luck on that day. It doesn’t mean we won’t have luck against Sevilla. For winning a final you always need a little bit of luck, that’s how it is. In decisive moments you need the decisions of the referee. So there’s nothing real we could use apart from that we felt pressure before the game, of course, but in the game we were really on the same level as City. Maybe not from the beginning but from a special point in the game we came back.

We are not out of the game until the last whistle and that’s what we could learn in these seven months. We had a lot of strike backs, a lot of comebacks in the games and that’s the most important thing. The game is decided after the final whistle, not before, on both sides – 2-0 in the lead, 2-0 down, whatever, everything is possible still. So you need to be concentrated, you need to stay confident, all this stuff. Our seven-month common history in this season is the perfect preparation for this game. All we have done until now is only to be prepared for this game, all the good things and all the bad things are really useful for this game. So I don’t think I will mention the Manchester City game. But all our development in the last few months, for sure I will use.

In between all these games and planning and preparation, you have had time to soak up what it means to the fans and the city. Can you understand what it would mean to win a European trophy and bring it back to Liverpool on Thursday?

100 per cent, because I think exactly the same. That’s quite easy – it means everything. That’s how we understand it and understood it all the time. We didn’t need the signs the fans gave us but it was quite obvious how important it is when we came to the two games against Dortmund and Villarreal in the stadium and what happened there. It’s clear, nobody should doubt about this. We all have the same, the same target, the same goal. Everything is clear – we want to take this cup for all of us and to feel good in a very special year for the whole Liverpool family, with justice for the 96 and all. It is such a special year and it would be the perfect final to take this cup to Liverpool.