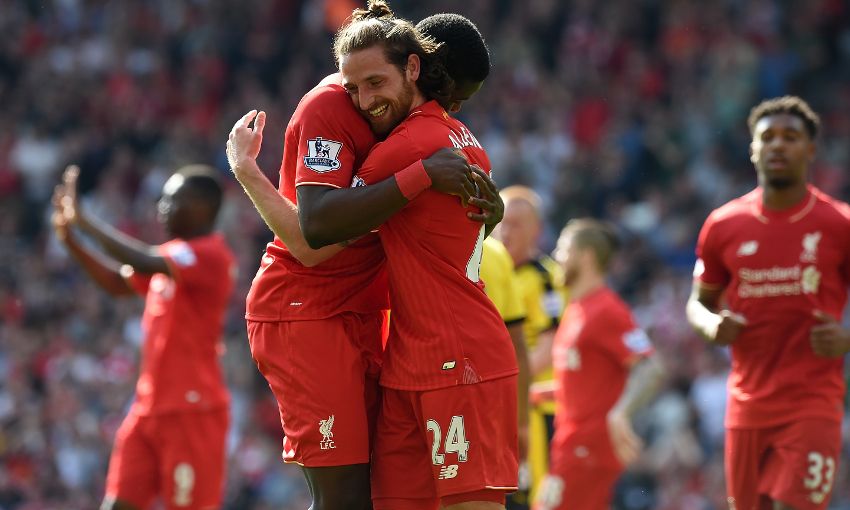 Goals from Joe Allen and Roberto Firmino ensured Liverpool recorded a 2-0 victory over Watford in their penultimate Anfield game of 2015-16 on Sunday.

The Reds took the lead in the opening half when Allen turned home a Christian Benteke header from close range.

Both sides had opportunities to make further indentations on the scoreline, but substitute Firmino finally clinched the points when he found the net with 14 minutes left on the clock.

Liverpool made eight changes to their line-up from the team that took to the field against Villarreal on Thursday night, with only Mignolet, Alberto Moreno and Philippe Coutinho retaining their places.

There were starts for Jon Flanagan and Benteke, while Lucas Leiva captained the side.

Liverpool’s second to last home fixture of the season began with chances for both sides to strike early.

Ighalo threatened after just eight minutes when he pounced on a loose ball from Allen with a first-time shot from fully 45 yards that sailed narrowly over the bar.

Almen Abdi then watched an effort go wide from Kevin Stewart’s wayward header, while at the other end, Coutinho fashioned an opening for himself with some tricky footwork inside the area, but his final effort was deflected behind by Craig Cathcart.

Next, Moreno arrowed an effort over the bar and Abdi had a goal-bound shot superbly blocked by Martin Skrtel.

The breakthrough arrived with 35 minutes on the scoreboard – and it was a goal of great simplicity.

Coutinho collected a short free-kick just inside the Watford half and clipped a pass into the area, which Benteke knocked down into the path of Allen’s run. The Welshman beat Heurelho Gomes to the ball and steered it into the net.

The hosts began the second period with intent and within moments, Benteke teed up Coutinho with a low ball across the face of goal; however, the Brazilian was unable to make the necessary contact to turn it over the line.

Nevertheless, on 55 minutes Liverpool had Mignolet to thank for keeping their advantage intact when he produced a wonderful one-handed save to thwart Ighalo after the striker had evaded two challenges on the edge of the area to open up an opportunity.

The Reds introduced Firmino for Coutinho on the hour and he almost made an instant impact, but his curler was straight into the gloves of Gomes.

Substitute Steven Berghuis then stung the palms of Mignolet with a fizzing hit from the corner of the box, but Liverpool made certain of the three points on 76 minutes.

Sheyi Ojo charged down Ikechi Anya’s attempted clearance and the ball ricocheted into the path of Firmino. He strode towards the edge of the area before striking goalwards. Gomes got his hands to the effort, but it squirmed beyond him and over the line.

As the contest ticked towards its conclusion, Benteke had an effort saved by Gomes and Ibe struck the outside of the post with the goal gaping, but the Reds had done enough to collect maximum points.