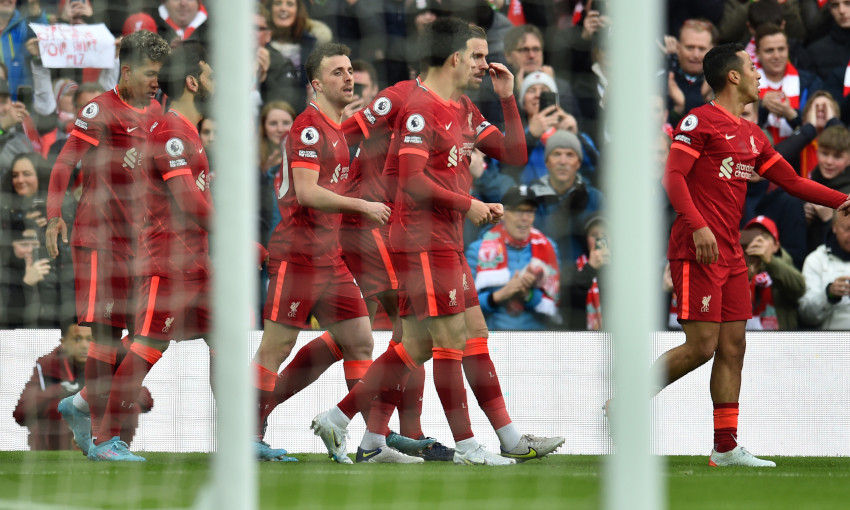 Diogo Jota’s 22nd-minute header and a late Fabinho penalty separated the sides in Saturday’s lunchtime kick-off as the Reds kicked off a massive April with three more vital points.

The result moved Jürgen Klopp’s team to the top of the table ahead of Manchester City’s trip to Burnley later in the day.

There were six changes from Liverpool’s Emirates FA Cup win at Nottingham Forest before the international break, with Mohamed Salah back in attack and Trent Alexander-Arnold fit for the bench.

The atmosphere crackled as the Reds strode out at Anfield for the first time since March 8, knowing the significance of a positive result in the Premier League title race.

Klopp’s men started on the front foot, too, but it was Watford who enjoyed the more promising sights of goal during the opening quarter-hour.

First, Ismaila Sarr moved onto a sixth-minute clearance up the pitch and met the bouncing ball with a long-range effort that refused to dip enough to threaten the net.

Then an Imran Louza corner kick from the right found Cucho Hernandez, whose flicked header at the near post was caught by Alisson Becker.

Liverpool needed their goalkeeper again at the half’s midway point, Alisson rushing from his line to crucially block a driven effort on the angle by Juraj Kucka.

The save’s importance grew in a matter of seconds as the home side went up the other end and got themselves in front.

Possession was crisply guided out to Joe Gomez on the right flank and his outstanding cross to the six-yard box was reached by Jota before Ben Foster to nod into the Watford goal, the Portugal international’s 20th strike of the season in all competitions. 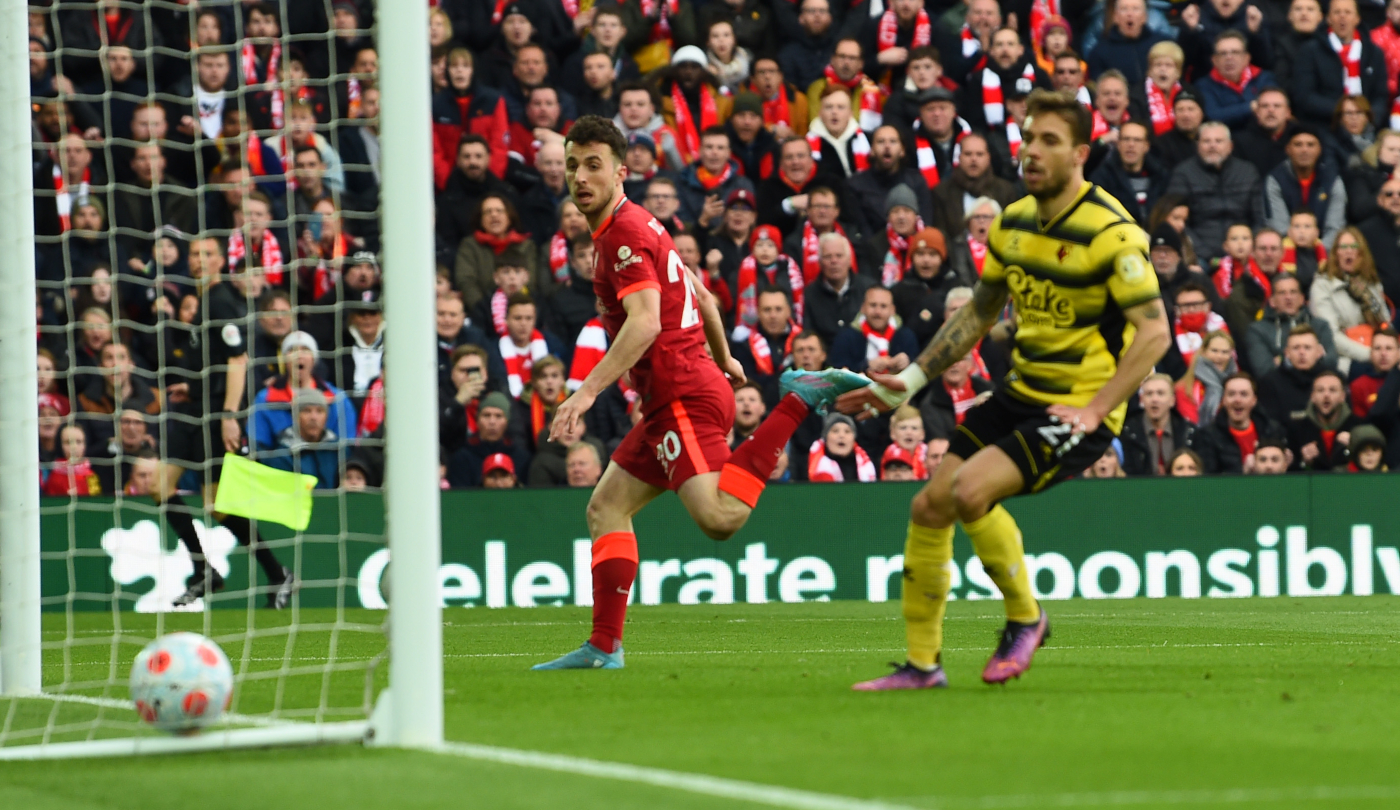 Thiago Alcantara thumped a volley over the crossbar from a cleared corner, before a sprawling save from Foster denied Jota a second goal when Andy Robertson’s shot deflected his way inside the box.

The ebb and flow of the opening 45 minutes continued beyond the interval and Virgil van Dijk had headed a decent chance from a Curtis Jones corner over the bar before the Hornets spurned a big opportunity.

Sarr broke in behind the Liverpool defence – narrowly evading an offside call – and teed up the supporting run of Joao Pedro into the box on the inside, only for the No.10 to skew his finish just wide of the right post.

Back to the other end, Jordan Henderson flighted in a free-kick that found Jota in a pocket of space; the forward could not quite get over the ball, however, and his header drifted into the Kop.

Klopp introduced Fabinho and then Sadio Mane from the bench as time elapsed, while Watford began to commit more players to attack in search of an equaliser.

Gomez almost architected a second for the Reds with an angled knock across the box to Robertson, who, perhaps caught between shooting and crossing for Roberto Firmino, sent the ball into the gloves of Foster.

But the points were finally secured a minute from time. After a VAR review, the referee called a foul on Jota by Kucka and Fabinho expertly swept the spot-kick into the top left corner. 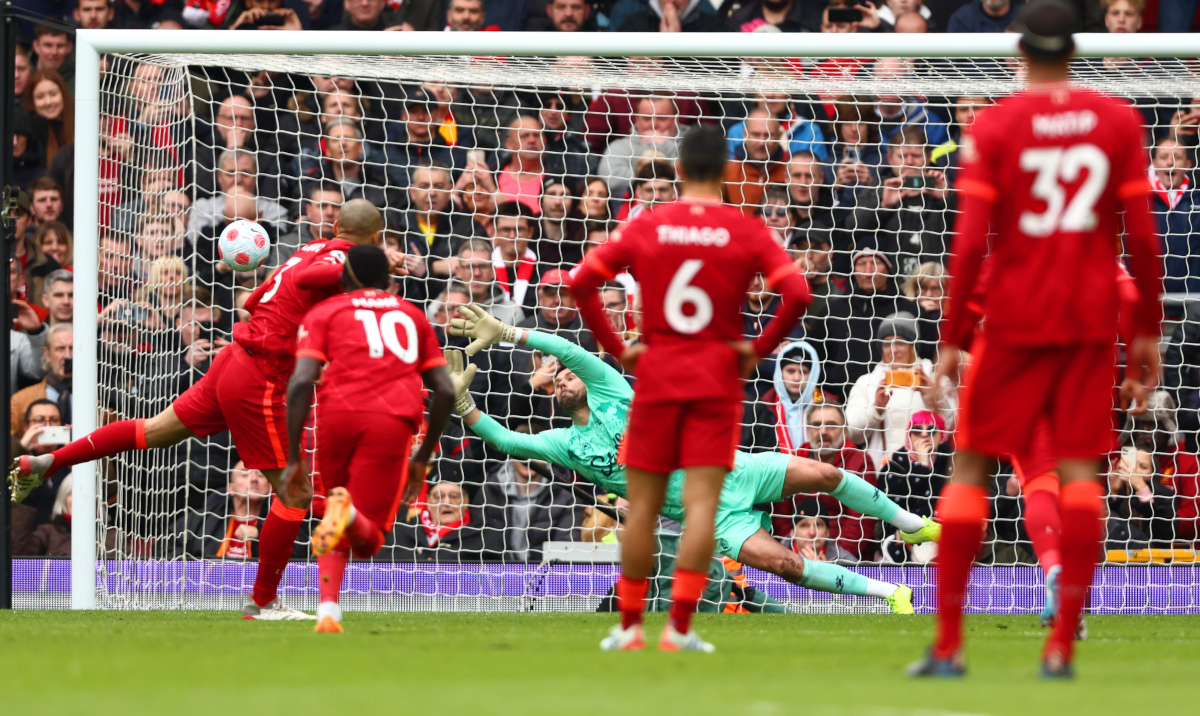