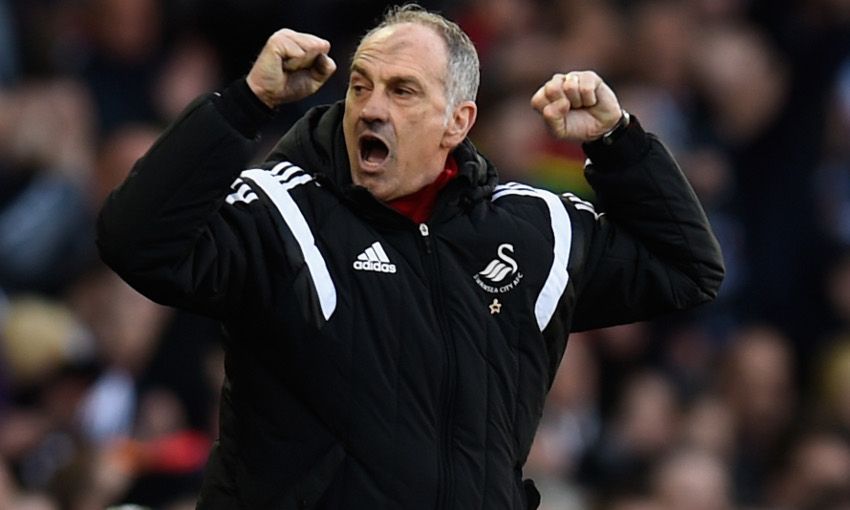 Swansea's model of selecting managers with similar tactical philosophies has been admired throughout the Barclays Premier League since they gained promotion in 2011.

Outside of the traditional top six, Swansea still have the highest average possession rate in the top-flight, although that has dropped from 58 per cent under Brendan Rodgers in their first campaign in the Premier League to 52 per cent this term.

Former coach Garry Monk started an evolution towards a more direct style and less time on the ball as whole. The long-term approach from new boss Guidolin appears to favour this vertical brand of football.

With the Swans now onto their third manager of the season, it's understandable that their pattern of play isn't always clear at present, but that should change as they persevere with the move away from the ideology that has given them their recent success.

In his four years at Udinese, Guidolin averaged under 50 per cent ball possession in all but one campaign, while every season his team scored the highest amount of goals from counter-attacks in the whole of Serie A.

This may take time to implement at the Liberty Stadium, and a full pre-season would give a better inclination as to whether Guidolin can transfer his values to the club. However, he clearly favours quick and versatile players in attacking areas.

Andre Ayew, Modou Barrow, Wayne Routledge and Jefferson Montero all fall into this category and have been used in various positions across the front-line. Some continuity in the future will certainly help the fluidity of their attacks.

This means that Gylfi Sigurdsson in the No.10 role is key to linking the midfield with the attack, while the Iceland international is also the team's leading goalscorer this term. Since the start of March, the 26-year-old has four goals and an assist, and he will look to unhinge Liverpool's holding midfielders with his clever movement.

Jack Cork and Leon Britton often form the central unit, with the latter a symbol of this overall adjustment in method. Britton's own style has altered due to the needs of his managers, and the evidence suggests the Swans are bypassing the midfield more nowadays.

The 33-year-old was an important part of Rodgers' team alongside Liverpool's Joe Allen, as he averaged around 60 passes per game with an completion rate of 93 per cent. This season he has played less, but has still made 22 appearances, with 20 fewer passes per game and a 5 per cent drop in the completion rate.

Liverpool 4-1 Cardiff City - how it unfolded