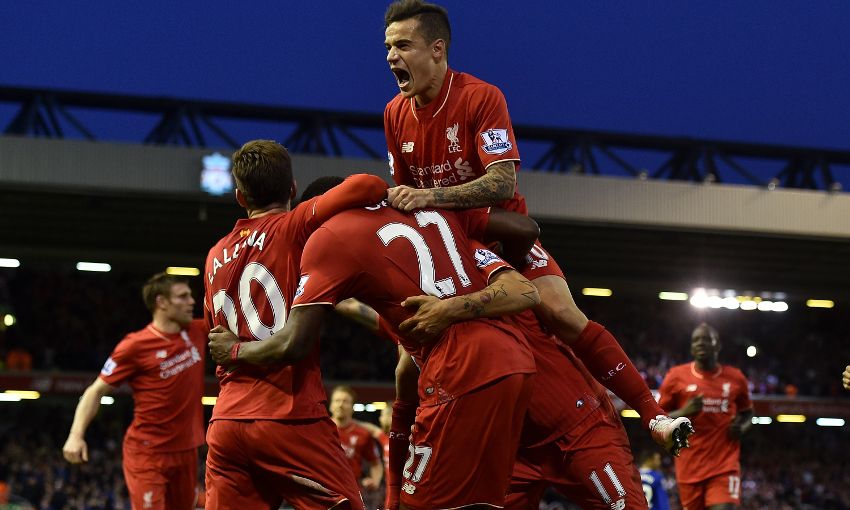 Liverpool surged to a 4-0 Barclays Premier League win over 10-man Everton in the 226th Merseyside derby at Anfield on Wednesday night.

The Reds emerged from an even opening half-hour to strike twice at the Kop end late in the first period – through Divock Origi and Mamadou Sakho.

A red card for Ramiro Funes Mori ruined the Blues’ hopes of finding a way back into the game, and Daniel Sturridge extended the advantage shortly after coming on.

Philippe Coutinho then added a fourth with a clinical drive, toasting a fourth consecutive victory for Jürgen Klopp’s men in all competitions.

The manager again made mass changes to his starting XI – nine in total from Sunday’s win at Bournemouth – in the hope that fresh legs would be the key to three points. James Milner wore the captain’s armband.

After early pressure from Everton had the Reds on the back foot, it was actually Adam Lallana who had the first clear chance of the game in the sixth minute.

When last man Bryan Oviedo smacked a clearance up rather than out, Coutinho reacted immediately to play his fellow attacker through one-on-one but the No.20’s finish was blocked by the legs of Joel Robles.

Kevin Mirallas placed a shot over the crossbar as the Blues counter-attacked in riposte and the Belgian was off target again moments later, wildly lashing wide having stepped inside Dejan Lovren 20 yards out.

Everton’s threat on the break was obvious and only a last-ditch – and perfectly measured – tackle by Sakho prevented Romelu Lukaku from adding to his derby tally for the season.

Next Lallana flicked a header narrowly wide of the near post from Nathaniel Clyne’s cross in front of the Kop, before Liverpool beat the visitors’ offside trap for a second time.

On this occasion it was Milner with the through ball and Roberto Firmino racing clear, but the end result was unfortunately the same, John Stones and Robles combining to keep the Brazilian out.

Few opponents are able to stop Origi at the moment, though, and the striker netted in the 43rd minute to put the Reds in front.

Deep into Toffees territory on the right flank, Milner held possession until the right moment and sent a cross to the back post for the No.27 to divert home his 10th goal of the season.

No sooner had those in the Kop sat down than they were back on their feet.

The Reds recycled the ball from a corner on the left and once more it was Milner with the delivery to the opposite side, where Sakho powered a header into the roof of the net for 2-0 and a welcome half-time lead.

Funes Mori was dismissed for a needless lunge on Origi’s ankle as the Liverpool striker looked to get turned on goal. Off went the Blues defender, while Sturridge replaced his injured teammate.

The England international soon slid a pass into Firmino, who was denied by Robles rushing from his goalline, but the third arrived on the hour mark.

A loose knock out from the back was seized upon by Lucas Leiva and the midfielder’s weighted diagonal into the box was a gift for Sturridge to side-foot into the bottom left corner and make it a half-century in Liverpool colours.

Reduced to 10 men and with the Reds buoyed by the situation, the away team were pinned back and under immense pressure which barely let up for the remainder of the game.

And Coutinho added the final flourish on 76 minutes as he received a pass across the area from Joe Allen and slammed a shot into the net – with Sturridge claiming it took a slight nick off him along the way.