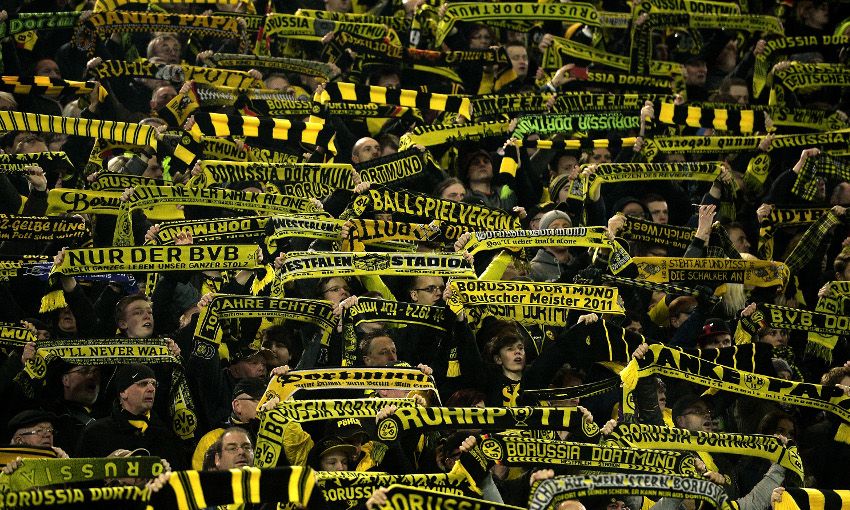 Liverpool and Borussia Dortmund supporters are sure to unite in breathtaking fashion to sing 'You'll Never Walk Alone' ahead of both legs of the sides' Europa League quarter-final tie.

But, while the story of Kopites adopting the No.1 hit from local band Gerry and the Pacemakers dates back to the 1960s, the origins of the masses at the Westfalenstadion taking the ditty to their heart are far more recent.

That story begins when a five-piece band from the Dortmund area called Pur Harmony were encouraged to cover the English classic in 1996.

And, while frontman Matthias Kartner was sceptical at first, the group eventually went on to recreate the famous anthem.

Kartner told Liverpoolfc.com: "A good friend of ours told us 'you have to make a recording of 'You'll Never Walk Alone'. I thought 'oh no!'

"It's a nice song but it was difficult to make it because of the harmony of the music. It's hard to sing because at first you go very deep and then you go high.

"But a week later we made this recording.

"We are Dortmund boys and big Borussia fans, so I gave the recording of 'You'll Never Walk Alone' to our stadium speaker and he took this and said 'very nice, we'll try this'."

From that moment on, the song went on to become a popular chant on the steps of the Yellow Wall - a stand which houses 25,000 BVB fanatics.

"They [the supporters] knew it from Liverpool," Kartner continued.

"But now since Pur Harmony recorded it, the people liked it from the beginning and it was fantastic for us.

"Norbert Dickel [Dortmund's stadium announcer] tried to use Gerry and the Pacemakers' version but the fans liked our song [better]."

When Liverpool last travelled to face Dortmund - for a Champions League group-stage clash in 2001 - Kartner had a big part to play in the build-up.

On that occasion, a speedy return from Spain led to an unforgettable experience for the successful musician.

He added: "I came from Majorca and went straight into the stadium and sang 'You'll Never Walk Alone' before the match.

"It was a great moment. When I sang the song in our stadium, the Reds put their scarves up [too] and sang with me. I was so proud. It was so nice for me.

"In my own production, I made 'You'll Never Walk Alone' in different versions and I gave this CD to [former Liverpool chief executive] Rick Parry.

"One week later, I got a letter from him telling me if there is a chance then they would invite me to sing it at Anfield.

"For me and many other Dortmund fans, my favourite club in England is Liverpool. The mentality is just like ours here in Dortmund."

Kartner won't be in attendance for tonight's meeting but admits if a late opportunity pops up then he might have to reconsider.

"I'm with my daughter and she is seven [so] I have not the chance," he said.

"But if Norbert Dickel asks me 'Matthias, is it possible that you can come in the stadium to sing it live?'

"OK then, I would take a look at a babysitter. If not, I will just watch it on the TV."