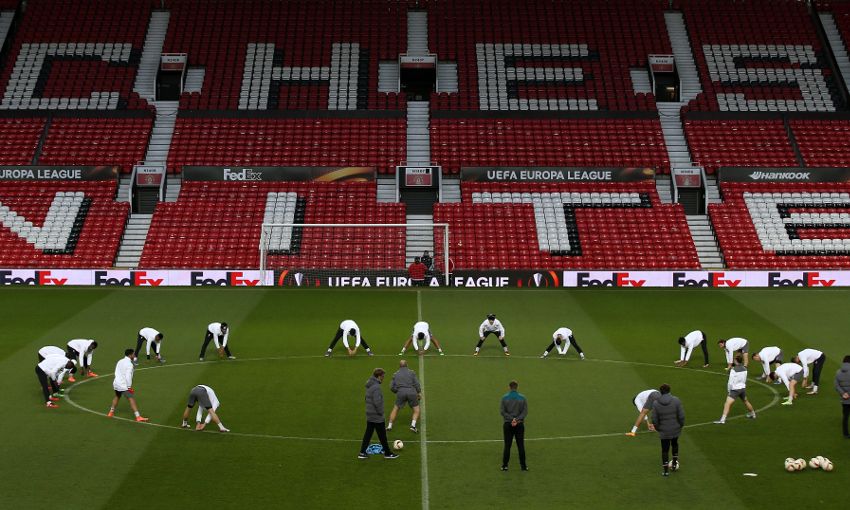 Jürgen Klopp explained why Liverpool took the opportunity to train at Old Trafford ahead of the second leg of their Europa League tie with Manchester United, revealing: ‘We want to treat it the same as any other European away game.’

The Reds made the short journey from Merseyside on Wednesday afternoon to set up base in Manchester ahead of Thursday night’s last 16, second-leg clash.

Klopp was joined by Jordan Henderson in hosting a press conference at Old Trafford before leading training at the stadium, in contrast to United who staged their pre-match media duties and preparations in their own surroundings.

But, Liverpool will stay in a hotel in the city overnight before another session tomorrow morning as they gear up for the return with Louis van Gaal’s side aiming to build on the two-goal advantage they hold from the first leg.

“I didn’t think [for] one second about it – it was clear from the first moment when I heard we would play against Manchester United that we would come here one day early,” said Klopp as he addressed journalists.

“It’s a Europa League game, it’s always like this. For me, it’s not [about] feeling comfortable, sleeping at home or something like this. We had a few seconds in the hotel before we came here [to training] and everything is OK; the room is OK, the bed is OK and so we can sleep here. We have the opportunity to train tomorrow morning and then we will play.

“Only the trip was a little bit different – usually it’s a flight that is longer than it took to drive today by coach, but that’s absolutely the only difference. The rest is a normal European game.”

Following the conclusion of the media commitments within Old Trafford’s Europa Suite, Klopp and his backroom team led Liverpool’s training session inside the empty stadium.

The boss continued: “I always enjoyed it when I played with my former clubs in European tournaments to breathe the stadium where you will play the next night. I like to imagine what can happen, I really enjoy this.

“There was no doubt we would take this opportunity to do it. So, if nobody says it’s not allowed then we will be on the pitch in a few minutes [to train]!

“It’s more for me [to visualise], to be honest. I don’t know [what will happen]. I am an absolutely optimistic guy and before a game I always have the best feelings… The problem is I’ve lost a few games after having a very good feeling before the game!”

Liverpool will go into the meeting as favourites to progress following not only their two-goal victory at Anfield last week, but the manner in which it was achieved via a high-intensity, all-action display.

However, Klopp explained why the fact that Manchester United have the capacity to avenge that first-leg deficit meant no-one within the Reds camp will be taking anything for granted.

“It’s football and since I have been here, tomorrow will be the third time we will have played Manchester United and we have always been in the game in the two games,” said Klopp. “That is an important sign for us and the world doesn’t change overnight.

“It is absolutely clear there is a chance for Manchester United, 100 per cent, that’s football. Anything can happen. But we know we know how to play them. That’s another truth, but it doesn’t mean it is easy for us – we will have to work for this really hard, [we need to be] really concentrated, we need to be brave and aggressive in a legal way. That’s all clear.

“I don’t think too much [now] about what will happen tomorrow night because we have a few hours to prepare ourselves and until now we have not had the team meeting, we will do it tomorrow morning.

“Tomorrow is Manchester United day with a meeting, training and then the game. There are a lot of things to do until then, but in the end we will be prepared.”