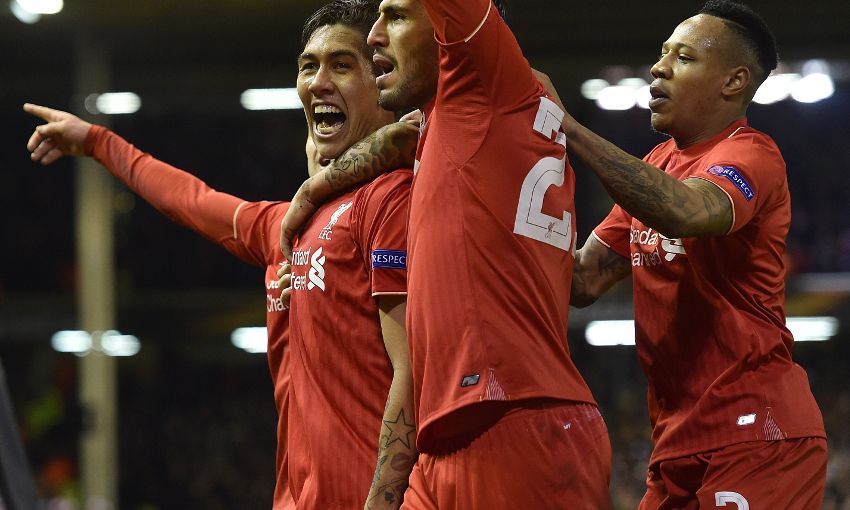 All of the elements are in place for Roberto Firmino to continue his sensational form for Liverpool as the Brazilian threatens to 'score in every game', according to compatriot Lucas Leiva.

The forward has found the target in each of the past three matches for the Reds, most recently prodding an important finish beyond David de Gea to seal a 2-0 victory over Manchester United in the Europa League on Thursday.

That streak has taken Firmino to nine goals for the season and with the No.11 now well adapted to life in England, Lucas expects his friend to continue to have a strong influence on Jürgen Klopp’s team.

He told Liverpoolfc.com: “He feels very confident and you can see in every game he is a threat. He looks like he’s going to score in every game.

“I hope it stays like that. He feels very happy here, he’s very settled and his family is doing well. There is no reason for him to not perform. I think he has been a big player for us already.”

Lucas himself was the recipient of plaudits in February and his form, including as an auxiliary centre-back, earned the fans’ vote for Standard Chartered Player of the Month.

The 29-year-old was presented with the award on Friday and in turn provided the latest update on the quad injury he suffered during the penalty shootout in the Capital One Cup final.

“I’m aiming that after the international break I’ll be close to coming back and hopefully playing a big part in the last part of the season.”

The midfielder will hope the run-in involves a chance to feature in the Europa League again after Liverpool secured an advantage over old rivals United at Anfield.

A penalty from Daniel Sturridge and Firmino’s second-half strike put the Reds in a healthy position at the halfway point of the Round of 16 tie – but with work still to be done in the return at Old Trafford.

“It was very good – the team is looking really positive and confident,” said Lucas.

“Everything the manager has been asking us in the last few months, we are starting to do every week. Hopefully it will be a good end to the season for us.

“[United] still have a chance, of course. It’s a good result for us but we now have to go away and perform again. If we approach it in the same way we did the last game against them, I think we have a big chance to go through.

“Hopefully, we’ll get to the final of this tournament because I think it’s a really important one for us.”